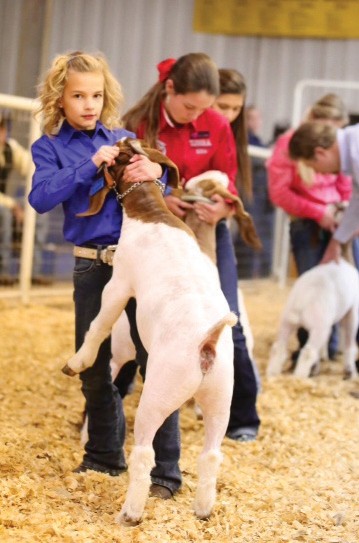 Kendall Crouch, daughter of Codi and Bryan Crouch, shows her goat at the 61st Annual Atascosa County Livestock Show. The show is this week, with the big auction this Saturday, January 17 at 1 p.m.

After months of hard work, 515 local 4-H and FFA youth will see how well their livestock and mechanic projects measure up at the 61st annual Atascosa Livestock Show.

Over 1,250 livestock entries and about 100 agriculture mechanic projects are expected to be sifted and/ or judged over the next few days.

Events were already underway on Tuesday with rabbits and goats being judged by Bill Fulkes and Brad Roeder, respectively. Showmanship judges are Amy Balzen for rabbits and Mike Wallace for goats. Rosemary Bonner and Robert Goslin are superintendents for the rabbits.

Judging will continue Wednesday and run through Friday, January 16. The Parade of Champions, are scheduled for Saturday, January 17 for those exhibits making the final cut. And of course, the big auction will begin at 1 p.m.

On Wednesday, the Poultry and Showmanship judging begins at 10:30 a.m. with Dustin Morgenroth making the call for winners. Gene Martinez, Mollie Stevens and Millie Jo Stevens will serve as Superintendents. Judging of the Market Lambs will begin after classifying (2 p.m.) Jim Misseldine will serve as judge. Justin Dunlap will judge lambs for showmanship. Superintendents for the lambs and goats will be Bobby McConathy and Ernest Davlla.

At 3 p.m., Judge Pat Real will begin to examine the craftsmanship of the Ag Mechanics exhibits. Ryan Novak will serve as superintendent.

Thursday morning kicks off at 8 a.m. and Judge Seth Swenson has the duty of ranking swine on Thursday morning. Market will be followed by the Breeding Swine competition. Swine showmanship will be judged by Marco Barrientes. Superintendents will be Scott Heffernan and Bobby Tymrak.

Those with Beef projects will be busy throughout the day with preliminary check-ins, sifting and classifications. Rodger Welch will act as Steer Classifier and Beef Showmanship judge. Serving as superintendents are Steve Richter and Randy Beard.

At 8 a.m. Friday, January 16, Dr. Chris Skaggs will begin judging the Beef Cattle competitors (market then breeding). Ag Mechanics projects must be removed from the Showbarn by noon. At 2 p.m., or immediately following the Beef Show, there will be a Judging Contest.

At 3 p.m. Friday, all exhibitors participating in the auction on Saturday will help set up for the auction.

Just about everyone’s favorite events – the Parade of Champions gets underway Saturday, January 17 at 11 a.m. At the same time, the hospitality area for auction buyers will be open. The auction sale begins at 1 p.m. with the popular Joey Tomlinson returning to take the helm as auctioneer.

The overall show superintendents are Randy Ramey and Alfred Krueger. Linda Ramey and Susan Krueger will be the show secretaries with Kim Lutz serving as livestock manager. Announcing the event will be Robert “Doc” Williams and Larry Ferguson.

Please see the special section included in this week’s issue.