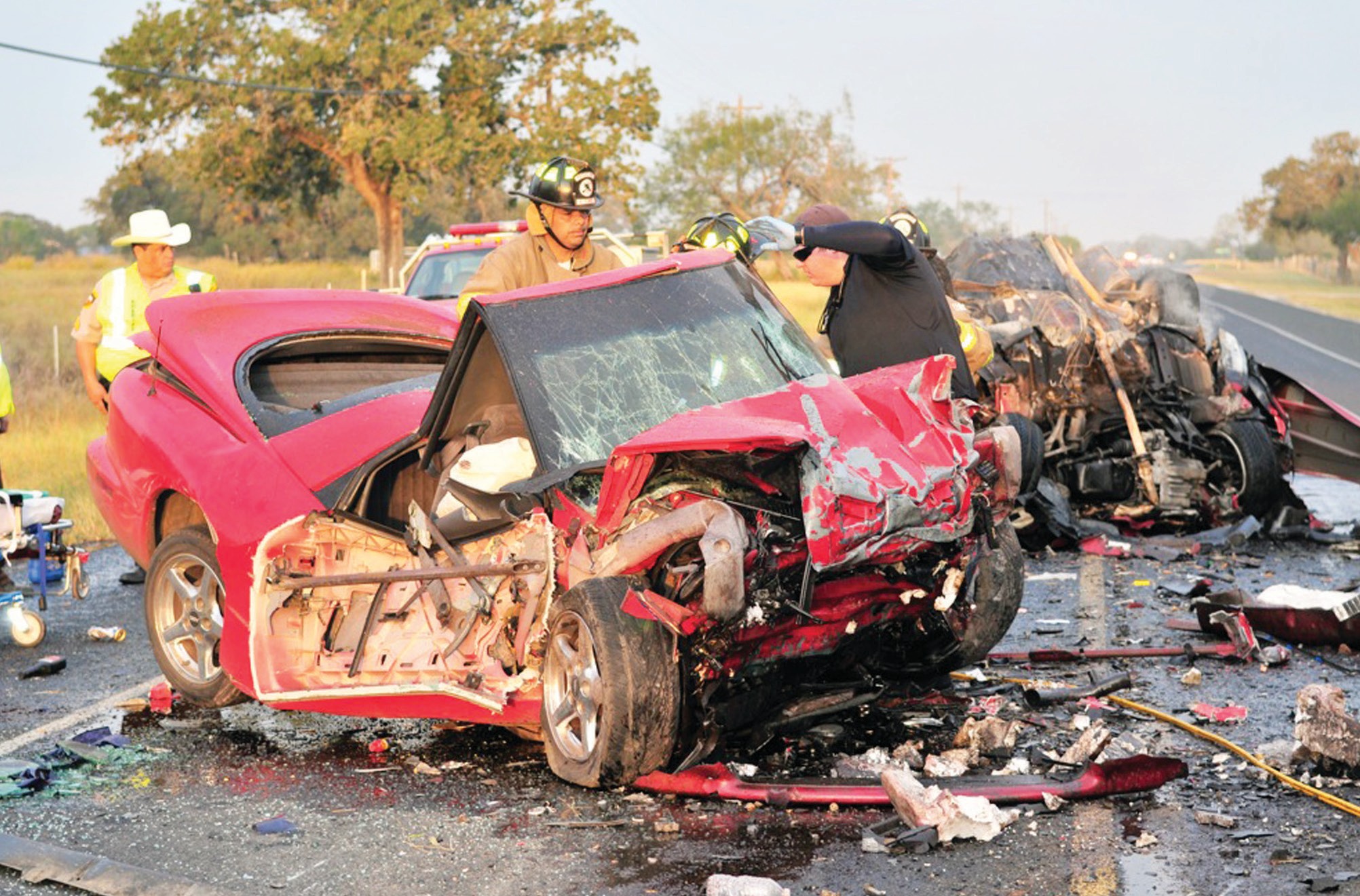 The double fatality on FM476 last Wednesday morning involved two vehicles. The red Pontiac, driven by Daniel Ray Rivera of Poteet, veered and hit the Honda (background) which burst into flames. The driver, Dwayne DePute, and his passenger C.W. Norment were both killed in the crash.

A fiery and fatal wreck has claimed two lives and leaves a man in critical condition.

The crash occurred Wednesday morning around 7:00 a.m. on FM 476 about two miles west of Poteet. A 1997 Pontiac, heading west veered into an oncoming 1997 Honda. According to DPS Sgt. Jason Reyes, the impact was so severe, the Honda caught on fire. Both bodies were burned beyond recognition. The bodies, identified as driver Dwayne Lawrence DePute, 29, of Poteet and his passenger Columbus Wayne “C.W.” Norment, 32, also of Poteet.

The driver of the Pontiac Daniel Ray Rivera, 27, of Poteet was AirLifed to University Hospital where he is in critical condition. The cause of the accident is still under investigation.

This is the tenth fatality this last month in Atascosa County. And while it is a statistic that is adding up, these horrific crashes are much more than a rising number.

The two young men who lost their lives were great friends. In fact, the reason why they were together so early that morning was to keep each other company. They had lost a dear friend who has passed in a tragic way three years ago. DePute had told his parents, Jeri-Lyn and Joseph DePute, that he didn’t want to be alone that day. DePute, 29, was a loving son and uncle. Family and friends celebrated his life this past Sunday. Described as a happy-go-lucky guy who would give his all to help someone in need, DePute was also wise beyond his years according to his father.

Columbus Wayne, known as “C.W.” or “Dubb” to his family and friends, was also a son, father, brother and uncle and great friend as well. His father, Julius Mitchell “Bubba” Norment died this past February. His mother, Kathie, teared up thinking about losing her son and her husband so close together. Norment leaves behind a daughter, Ginger Nichole Norment who was his whole world. Norment recently bought her a motorcycle helmet and fashioned some leather chaps out of the sleeves of his old leather jacket. He would drop whatever he was doing to help his family members, like recently moving to Poteet to help his mother out. His mother also related the story about the death of both men’s good friend. “If it’s your time, there’s nothing you can do about it,” she said.

“There is no way to explain this other than they were needed by God,” said Joseph DePute of both young men. He then added “Our heartfelt prayers go out to the Rivera family as well.”

Rivera is undergoing several operations according to one family member.