It was late evening news time, Tuesday, June 26, when folks, living in a narrow swath across the center of Atascosa County, were suddenly confronted with the sounds of ferocious winds. Then came the resulting damages to their property. The damaged area extended across Atascosa County, starting from the East, in the Verdi to Leming area and then onward through the vicinity of Kyote in the western portion of the county.

Many residents wondered if a tornado might have dipped down. Possibly, but in reviewing the damage, likely the cause was microbursts, very localized columns of sinking air, producing damaging divergent and straight-line winds at the surface, similar to, but distinguishable from, tornadoes.

Precinct 1 County Commissioner Lonnie Gillespie, who lives north of Leming said, “Tuesday night I was watching TV and the news was just about over when I got a call from an employee saying he probably wouldn’t be able to show up for work the next morning because the roof blew off his house. That was just the beginning of an eventful evening starting with my going out to review the overall damages. Well, I live about a mile north of Leming and didn’t have that kind of wind. At my home we probably ended up getting about a quarter of an inch of rain and some pea or marble-sized hail. I went into Leming and was surprised to see that there were limbs broken everywhere and some of the limbs had fallen on people’s cars. Some of the driveways were blocked, where they couldn’t drive out.”

“I called Leming firemen and we went to work with chainsaws. Not just us, but the little township of Leming turned out and everybody went to work. I, finally, left to go home about one o’clock in the morning. We had all the streets passable and everybody was able to get out the next morning except for places where the power lines were down. Those areas were blocked off so no one could enter where there’s the possibility of electrocution. Wednesday morning we went to work trimming trees.”

Gillespie continued, “The storm was Tuesday night and as of today (the following Monday afternoon) we’re about two-thirds of the way to finishing with carrying trees off. We were stacking trees on the fire department property in Leming, with their permission. In a day or two we’re going to get a mulching machine in there and take that mulch out to the county road and bury it. I’m just a little concerned about burning it in the township of Leming because we could be asking for fire problems there. If it was left up to each household, there would be a lot of fires on properties and we didn’t want that.”

“Bill Slomchinski, who lives just west of Leming, lost an irrigation pivot system. Bill also lost some trees and he had some roof and barn damage. To the East of Leming, Tommy Caraway had extensive damage to his home, some barns and it took some big oak trees out there. I went up in a helicopter with a friend and we were able to see that some of the houses, off the road, you don’t normally see, had devastating damage. There were barns down and houses with parts of their roofs missing.”

To the southeast of Leming on FM 3006, Eddie and Connie Diaz had damages on their property. Eddie said, “I was out on my tractor about eight in the evening when the winds began swirling and trees were swaying. I got off that tractor in a hurry and went inside the house.”

There were trees down all around in the area of Maricio Lane and elsewhere in the Verdi Community.

Clifford Dorrill, who lives northeast of Kyote, along FM 2504, had roof and tree damage on his property. Dorrill said, “After the evening news, Tuesday, the temperature was 91 degrees and things got very still. Then there was the noise of very high winds and I could hear limbs twisting and breaking and electricity could be seen sparking on lines outside.” His neighbor, Frank Laskowski, with property at 55 Kyote Road, had lots of mesquites, including very large ones, that had been damaged. 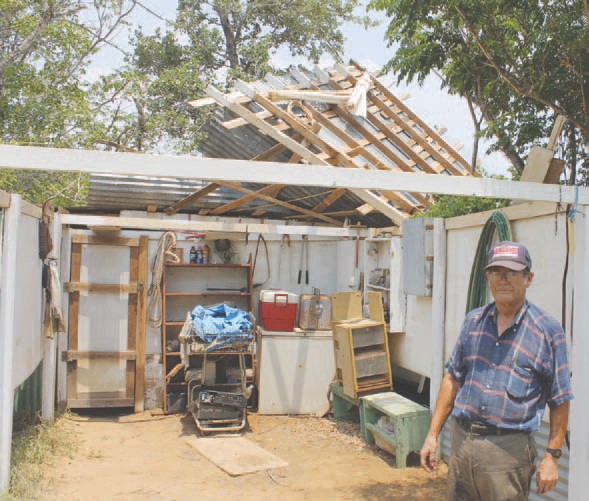 Roof ripped off shed at Clifford Dorrill property, northeast of Kyote, at 8100 FM 2504. 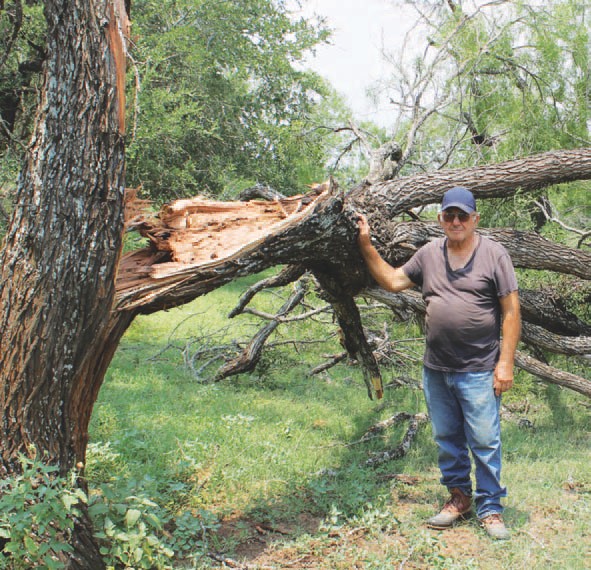