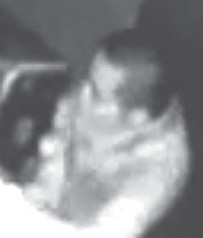 The identification of this suspect, taken from surveillance video at Virginia Twins Garden Market, is being sought by authorities.