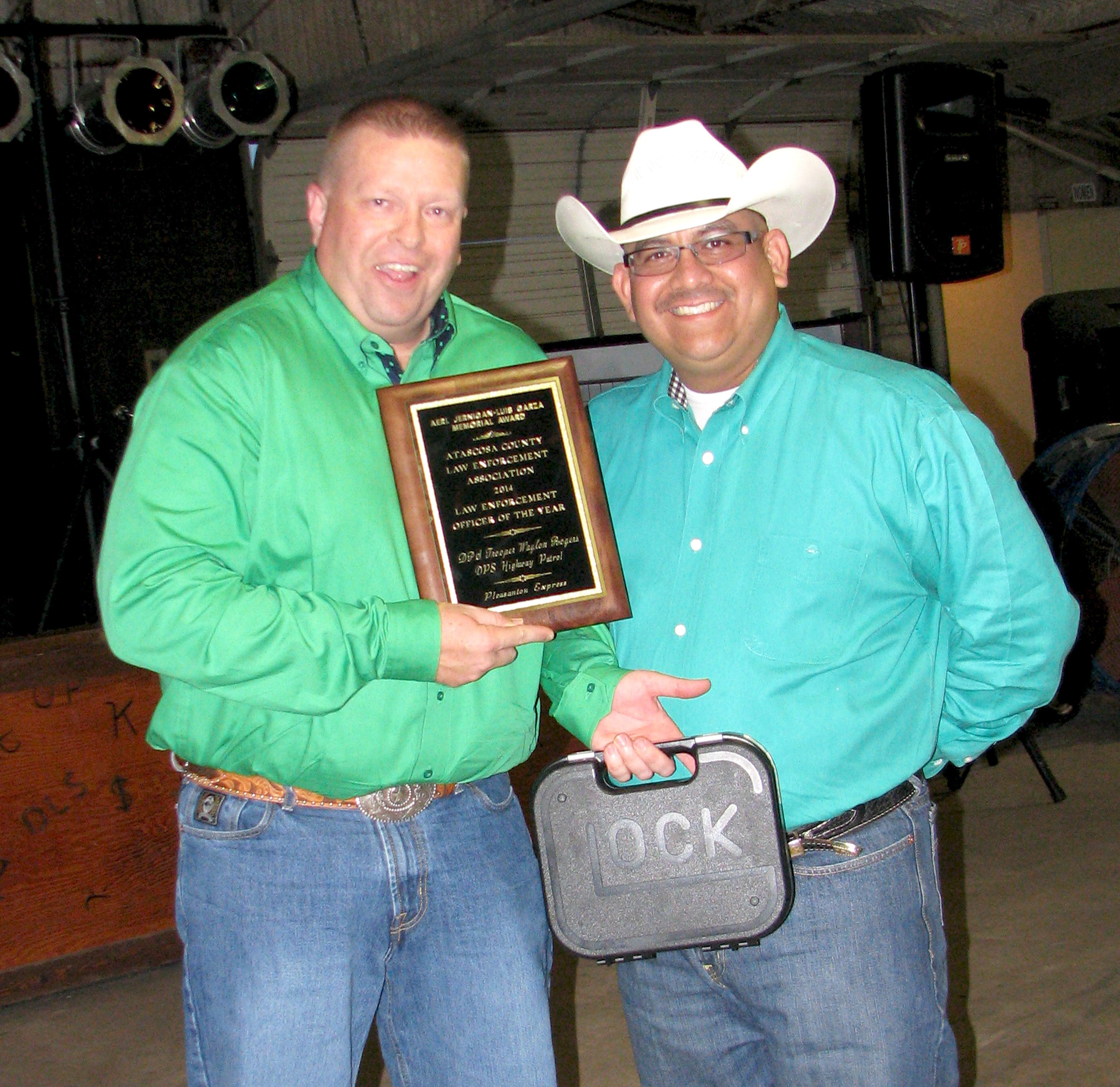 He received the award after a steak dinner and the evening’s speaker Pleasanton Chief of Police Ronald Sanchez.

The dinner, catered by Rose and Balde Pesqueda, was served among a western theme – complete with branded plate chargers – thanks to LeighAnn Gonzales’ decorating talents. Strawberry fritters were made fresh at Jim Collums’ chuckwagon, too.

He was presented the award by Sue Brown, Editor of the Pleasanton Express – which has sponsored the award since 1987. The Express also assists in the voting process of the award.

This year Trooper Rogers has shown on several occasions’ lifesaving acts. There were a couple of vehicle fires that required Trooper Rogers to act quickly in getting the people out of their car and then he proceeded to try and put the fire out.

Trooper Rogers is also always willing to help his fellow brother in Blue out on any call. On one occasion Trooper Rogers came to help me on a fatal crash, on his day off.

Trooper Rogers works over a hundred crashes a year and I have never heard him complain on getting called out. Some of these crashes were major crashes that required Trooper Rogers to provide first aid.

He won the Captains award this year for Commercial Motor Vehicle enforcement. Not only is Trooper Rogers a GREAT officer but he is a GREAT dad, and husband. Trooper Rogers makes time to coach his sons T-ball team and soccer team. He also makes sure that there is time for his wife Dayna even though he is going to the Border once a week and the Governor’s Mansion a few times a year.

To sum it up Trooper Rogers is a great officer that will go to any call and help any of his brother’s in blue out. He is also an asset for the community, but most important he is a great dad, and husband to his family.

The other nominee was Jourdanton Chief of Police Eric Kaiser.

Trooper Rogers received a Glock .40 caliber pistol from the ACLEOA.

The Pleasanton Express is honored to assist in the selection process and sponsoring the plaque for the Officer of the Year since 1987.