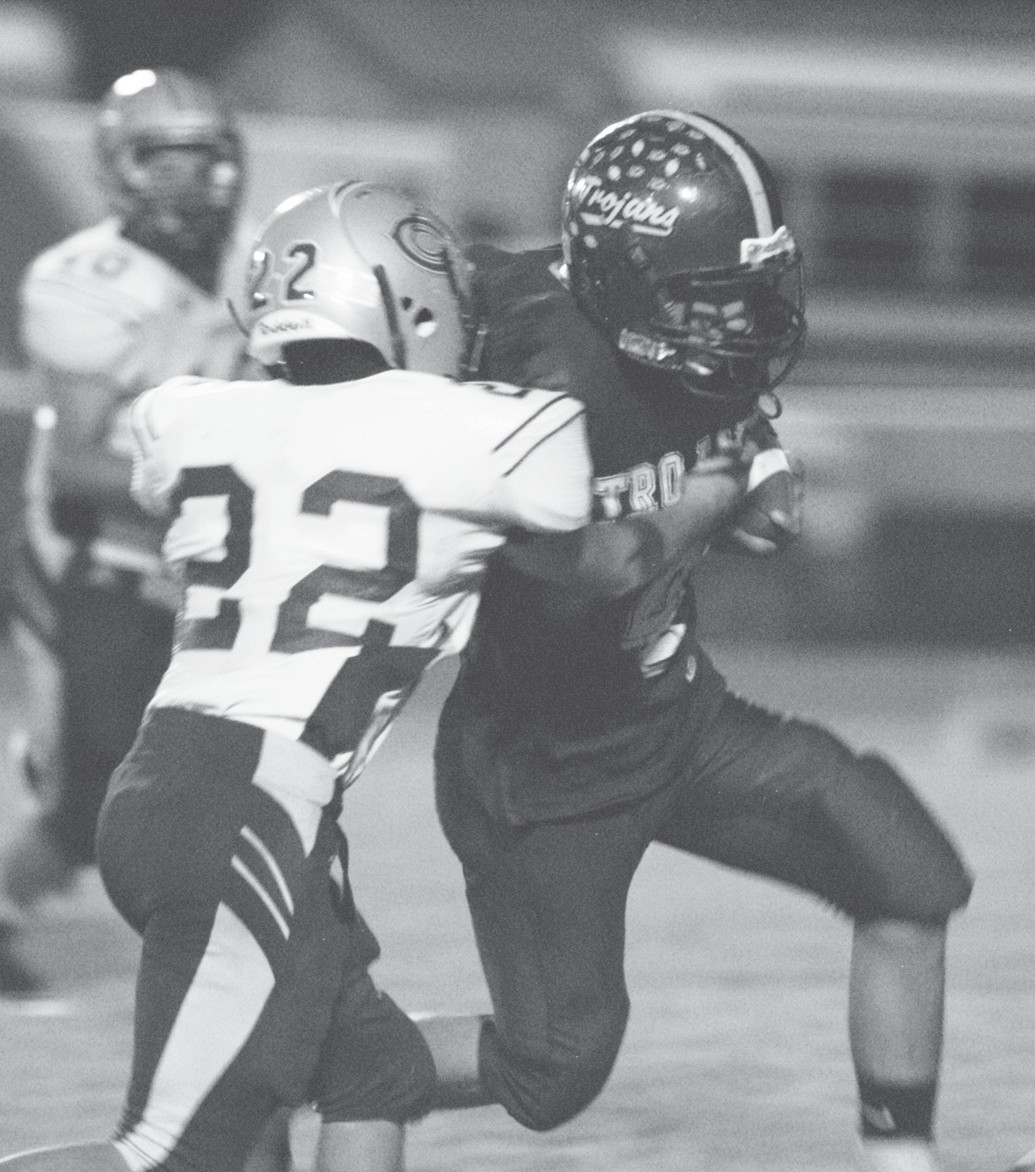 Charlotte’s Isaac Santos breaks lose from a Cotulla defender during the Trojans home victory over the Cowboys,

The Charlotte Trojans were able to overcome adversity at Trojan Stadium to pick up their 4th straight victory. After getting down by two touchdowns, the Trojans stormed back to pick up a thrilling 24-22 victory over the 2A Cotulla Cowboys. The streaking Trojans will take their recent success on the road Friday, as they face the Indians in the Hwy. 97 Battle.

Coming into this Friday night contest, Charlotte knew they had to minimize mistakes and force the Cowboys out of their game. Although this was the game plan, things didn’t go as hoped early on.

The Cotulla Cowboys flexed their muscles early, as they were able to take a 7-0 lead with 3:21 to go in the first. The touchdown came courtesy of a 19-yard run. The PAT was good, to give them the lead.

In the second quarter, Cotulla went back to work, as they had their most explosive play of the season. Cotulla’s Joseph Tellez connected with Joel Garcia for a 96 yard TD pass to give the Cowboys a 14-0 lead with 5:53 to go in the second.

Just over a minute late, Charlotte was able to strike for their first TD of the game. Tyler Cantu was able to break loose for a 30-yard touchdown run. The Cantu 2-point try was good, as the Trojans trailed 14-8. This is how it would stand at the half.

In the second half, Cotulla was able to extend their lead, on a 17-yard run by Tellez. The twopoint try was good, as the Cowboys now led the Trojans 22-8 with 9:43 to go in the third.

Although the Trojans were down, they wanted to prove they were not out of the game. Turnovers and big drives resulted in success to end the game for the Trojans. Charlotte was able to score their second TD of the game, on a 9-yard Javier Zuniga TD pass from Isaac Santos. The Cantu 2-point run was good, as they closed the gap to 22-16 with 6:26 to go in the third quarter.

In the fourth, the Trojans scored their final TD of the game with 9:25 to go in the game. Santos was able to hit Dilan Weigang for a 12-yard TD pass. With the game tied at 22-22, the Trojans decided to go for two-points again. Once again, Cantu fought his way into the end zone as the Trojans had stormed back to take a 24-22 lead on the Cowboys. In the end, the Trojans were able to hold on for the victory.

Coach Mark Salinas on the victory- “We knew we had to play hard and play well to beat Cotulla. We also had to minimize our turnovers, mistakes and penalties,” stated Coach Salinas.

Offensively, Charlotte had a great game plan, as they rushed for 247 yards and passed for 144 yards in the contest.

“The kids are believing in our offensive system. We know that we are never out of a game. Our coaches made adjustments at half time to help our run game. Tyler Cantu ran the football with authority. He runs hard and wants the ball. Isaac Santos also finds running lanes and runs well. Weigang also had a great TD catch on 4th down, giving us the lead late,” stated Coach Salinas.

Defensively, the Trojans did give up 464 yards, but once again, they came up big when it counted. The Trojans did force three Cotulla fumbles.

“Hats off to our kids on the defensive side of the ball. They never quit and kept playing. They continued to hit the ball carrier, creating timely turnovers. Jesus Ramos had a big fumble recovery for us. Santos also had a big INT in the end zone, stopping them,” added Salinas.

According to Salinas, although they have won four in a row, the kids know they must earn respect one game at a time.

The Trojans and Indians will kickoff Friday at 7:30 in Jourdanton.