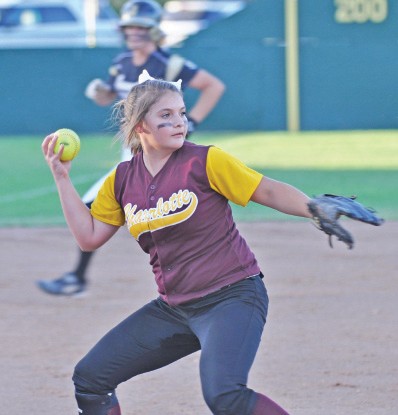 Charlotte’s Makayla Groff prepares to throw out a Junction base runner in a bi-district round loss Monday night.

SAN ANTONIO– Charlotte couldn’t stave off elimination after a 15-4 loss to Junction in a bidistrict playoff round Monday night.

“It was definitely a tough one,” Charlotte head softball coach Chris Raimondi said.

“The errors and not getting to the short pop-ups extended innings.”

After senior Jayti Wilson singled in the bottom of the third to put Charlotte on the board, the Trojanettes trailed by one, 2-1 after three innings.

Junction burst offensively with the help of a 2-run homer, along with a 5-run frame to lead 7-1.

“We did not capitalize while leaving runners on base,” Raimondi said.

“We had the hitters we wanted in those situations, but just couldn’t come through.”

Junction separated itself from the Trojanettes in the sixth inning after a Lady Eagle belted a 3-run homer.

Charlotte scored three runs in the bottom of the sixth, but couldn’t spark a late-inning comeback in the end.

Trojanette right-hander Makayla Groff didn’t allow a walk throughout the matchup in the loss.

Charlotte will only lose one senior, Jayti Wilson, which allows the young squad to learn from a playoff experience.

The Trojanettes look to work around their pitching staff during the offseason.

“The strongest part of our team this year was definitely our pitching,” Raimondi said.

“They were not overpowering, but they hit spots very well and walked very few batters this year, which is a great improvement over last year.”