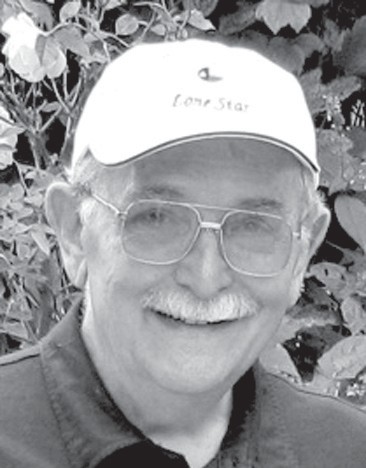 I’ve progressed from the same kind of fear, as a youngster and a young man. Sawyer came to us almost eight years ago in one of the rainiest, stormiest seasons in Central Texas in a decade or more. He was three months old, matted with burrs and dirt.

He appeared at our gate as I was trying to do some lawn maintenance before another drenching downpour. With a pink tongue sticking through his white “mustache,” I thought, “Life Mate is going to love this little ragamuffin.” Of course she did. He’s still here.

He and I have weathered some storms together, some pun intended, although I won’t push my luck. Lightning might strike again.

There are good reasons for those fears in both of us.

At about now, per usual, you expect me to say, “That reminds me of the time,” and Life Mate will say in mock despair, “Omigawd, not again! Another story! People will think you’re 108 years old, have been everywhere, have seen everything and have done it all! Or a liar.”

I picked a bad time to rent a tux for a prom.

I was on the fringe of the famous Storm of 1953 in downtown Waco. The worst tornado disaster in Texas history killed 114, injured 597 and almost destroyed the downtown area. That put me on alert for a long time.

Then, in 1957, while a college sophomore at then-Sam Houston State Teachers College, I saw and survived (without a scratch) three tornados in one weekend. That’s pretty eye opening for someone who otherwise thought he was invisible and bulletproof.

As a full time student, I had what was supposed to be a part time job but was more like a full timer —sports publicity director. The job included being the public address announcer at home baseball games.

Bearkat baseball was on a par with any Southwest Conference school of that day.

That scary Saturday in March 1957 brought Southwestern Louisiana Institute to town to play a very good Bearkat nine. There was a single game Friday night and a Saturday doubleheader.

Sam Houston took the first two games and the doubleheader opener was delayed by sprinkles on this cloudy Saturday.

After the first game, coaches and umpires were standing by second base, discussing whether to continue. I sat in the press box “structure” and watched a cloud formation out past center field. I noticed that something resembling a tail on an animal was forming and looked as if it was descending. Then it dawned: It was a tornado.

I flipped the PA microphone switch and said: “The cloud past center field just made your decision. The coaches and umps looked that way and quickly broke into a run toward their cars. Meanwhile, I’d quickly dismantled and stowed the PA system and was climbing down the ladder to retreat to my rooming house.

I entered the home of Elmo and Falvey Welch, the late 70ish couple who rented rooms to me and four other boys across the street from the college campus. I went into my room and despite the fact my bed was by a window, I jumped in and drew the sheet and blanket over my head.

Sure enough the tornado howled right through Huntsville, but we only got the peripheral winds. That was enough to blow down a large oak tree near my room, and it crashed against the eaves and roof right by my window. Thankfully, there was no major damage to the house because I knew, even with rental income, Elmo and Falvey couldn’t afford major repairs on a retired prison guard’s pension. I don’t want to see another tornado up close. My luck’s been stretched too thin already.