Three Weddings and a Baby Shower

Lately it seems as tho everyone is getting married, having a baby shower, or graduating.

‘Tis the season I suppose. I’ve gotten beau coups (lots:) of invitations. I confess, I haven’t attended many. Mostly due to conflicting schedules.  But this weekend I went to a beautiful wedding.

Not only was the groom our youth minister, he is our pastor’s youngest son.  It was emotional, for sure.  There were tears, choking up and a bit of nerves…Ok, he called the bride by the wrong name, and is blaming it on nerves…He will receive flack for that for a long, long time I am sure…

The bride’s father also took part in marrying them, and even allowed the groom to kiss the bride at the end…it did take a minute to get those words out.

But if I had to describe the wedding with one word, it would be funny.  Not very usual for a wedding.  The bride and groom laughing, really laughing during the service. You just don’t see that.

At one point Pastor Duane had the whole bridal party sit down as he read them a book. It was just like children’s sermon in church.  The book was about love, and  shortly after the giggles, the tears came.

I see these moms watch their babies walk across a stage or say "I do" and they handle it so well, yet, I sit in tears, because I know my time is coming. Maybe it’s the fact that my kids are getting older. Soon, I will be watching my children graduate, get married and have babies. I am excited, yet sad for this. I’m still missing the pitter-patter of little feet.

It’s true what they say, "Enjoy them while you can, they grow up quickly." So very true. I plan on enjoying every stage, even if it is bittersweet. 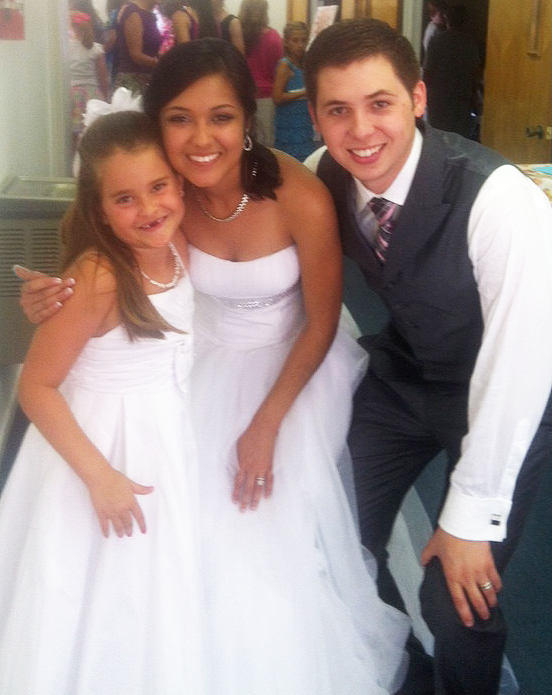