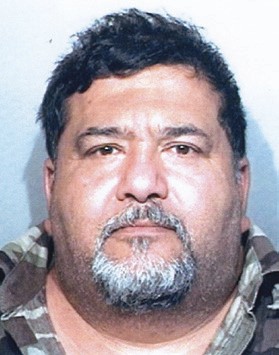 San Antonian John Randy Torres, 51, allegedly stole a chainsaw from a ranch on Leal Road and drove off in his red Dodge pickup shortly before noon on Wednesday, Oct 23, according to the Atascosa County Sheriff’s Office (ACSO).

The owner of the chainsaw, an employee of the ranch’s landowner, saw the thief take it, called police and began to pursue him in his own vehicle. ACSO deputies responded to the call.

According to Atascosa County Sheriff David Soward, Torres, with the chainsaw owner still in pursuit, drove onto Lucas Road into Black Hill. Allegedy, Torres drove through a fence into a pasture on Lucas Road and tossed the chainsaw into some brush.

Torres then turned onto Black Hill road, then FM 478, and then Highway 97 traveling east towards Floresville. After crossing the Wilson County line, Constable Bill Meadows attempted to pull him over. Torres allegedly sped away, evading arrest by Meadows.

ACSO booked Torres on charges of Theft Over $50 and Under $500, two counts of Unlawfully Carrying a Weapon and Criminal Mischief more than or equal to $500 and less than $1,500 (in reference to allegedly driving through a fence). Bail was set at a total of $16,000 and Torres made bail on Thursday. Sheriff Soward said “Charges for evading arrest are expected to be filed in Wilson County.”