There is a new hospital in town

Jaime Wesolowski, President and CEO of Methodist Healthcare System said that the new name of the hospital is linked to the Methodist Healthcare brand, which is driven by its faith-based foundation and mission of serving humanity to honor God by providing exceptional and cost-effective health care that is accessible to all. 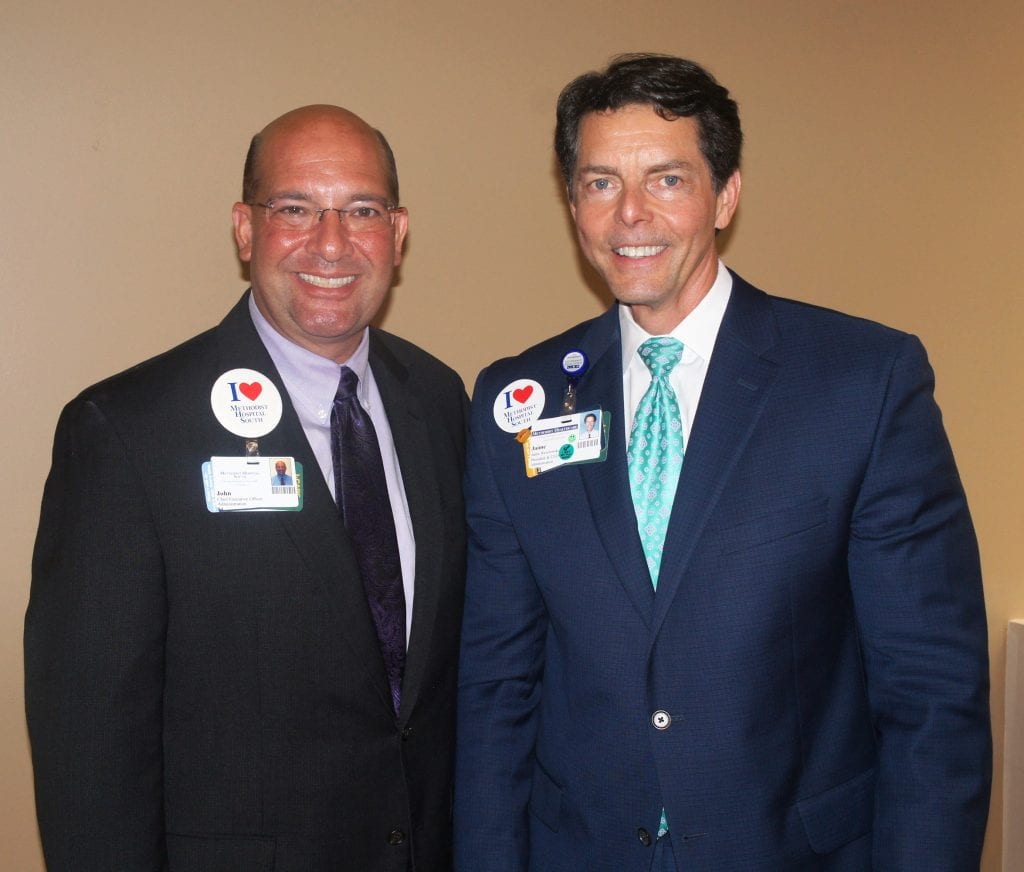 “Our promise is way too big. We can’t settle for mediocrity at anything, and that is what makes Methodist Healthcare System fantastic,” said Wesolowski. “Next to leading someone to a closer relationship with God, there is no greater calling than the calling we have in health care.”

Wesolowski said Methodist Healthcare System strives to be exceptional, which is to be in the top decile when compared to all hospitals in the country, in every category that is measured.

“This is probably one of the most exciting things that has happened in our community for many years. We are very fortunate to now be Methodist Hospital South and be part of Methodist Healthcare System and we want to welcome you all, because you all are part of the family,” said John Ulbricht, CEO of Methodist Hospital South. He shared his excitement that Methodist is a faith-based organization before leading the approximately 50 people in attendance in prayer.

Wesolowski, who has served as President of Methodist Healthcare System for 10 years, told the crowd he loves South Texas and never wants to leave.

Wesolowski holding the July 5 issue of the Pleasanton Express read the newspaper’s weekly poll which asked, “Are you excited about the new Methodist Healthcare System coming to Atascosa County?”

“We are delighted that 98 percent of respondents answered yes to that poll. I don’t know who those two percent are,” said Wesolowski. “Anyway, we’ll change their minds.”

Wesolowski said that since everyone will be at the hospital at some time in their life, he wants Methodist Healthcare System to be the best. He explained the Methodist Excellence Operating System and spoke on growth and finance and how the hospital system is very healthy from a financial perspective.

“We have no debt at all,” said Wesolowski. Methodist Healthcare Systems paid cash to purchase the newly named Methodist Hospital South.

“Methodist Healthcare Ministries is already here. Last year they gave $200,000 to Atascosa Health Center for dental work and integrated health care services. So I can tell you now that the system is here, they will be here in a much bigger way as time goes on,” Wesolowski said.

Wesolowski shared his personal story as a strong Christian and as a Stage 4 throat cancer survivor. A little more than 10 years ago, he was the CEO of a hospital in southern California.

“I have always been a strong Christian, but when you are recovering from Stage 4 cancer, you tend to pray a lot more,” Wesolowski said. “I was praying for recovery if it was God’s will. Once I was getting through the end stage of my recovery process, I started feeling the need to pray to do more with my life.”

Wesolowski thought of other ways he could serve once he recovered from cancer. He didn’t know if he would become a missionary or something completely different, but he knew God had the answer, he said. Shortly after that, he learned about the retirement of the former CEO of Methodist Healthcare System. He looked more into it and was drawn to its mission. Wesolowski applied and went through the interview process. He said he prayed not to get the job, but to get the job only if he was the right person and could make a difference.

“When I finally got the job, I knew my prayers were answered and that there is a reason why I am here,” Wesolowski said. “That motivates me every single day to drive this health care system to the best it can possibly do, as a promise I made to my Lord and Savior.”

Dr. Mann: hands-on leader, educatorHoliday shopping, fun at Vintage in Verdi Dec. 3-4Save the date for Merry on Main