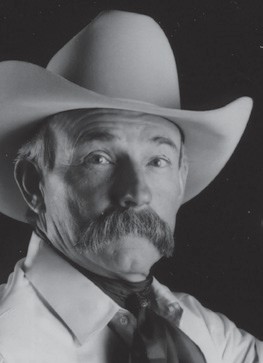 Pete was invited to put on a working stockdog demonstration at the agricultural fair in the nearby town of Perdue, Saskatchewan. He could have brought his own lambs that were ‘dog wise’ but his hosts offered to furnish the sheep.

Pete peeked into the dark trailer at the sheep. Six big black-headed Suffolk ewes glared back at him malevolently. It was like looking into a cave full of bank examiners! He stationed his wife Pam and his dog Jock at the back and opened the tailgate. The ewes charged in a flying wedge and bowled over the defense!

They made straight for the show barn then turned at the last second for a windbreak of willers. Jock was on ‘em, snapping at their noses! In the melee an abscess broke on one of the ewes!

The ewes holed up in the windbreak…all save one who started down the highway to town! Pete sent Jock ‘away to me!’ to fetch’er back. The two met three times on the centerline before she turned back for the bunch. She arrived with a bloody snoot and led the others down the road in the opposite direction!

Assuming control, Pete, Pam and Jock aimed for the intersection leading back to the fairgrounds. It was fenced on both sides except for one driveway that led to a nice country home set back on a beautifully landscaped lawn. The ewes took a hard right and made for the house!

As the flock rounded the corner of the house Pete caught a glimpse of a well-dressed lady peeking through the curtain. They made twelve passes around the house trampling shrubs, lawn and manicured flowerbeds. They mangled four bicycles and knocked over six flowerpots before panting to a slippery stop on the front porch. The porch floor looked like the bottom of a dumpster!

The enraged homeowner opened the door to register her displeasure. The lead ewe broke for the living room! Pete followed, slamming the door behind him! They raced over sofas, coffee tables, potted plants, under the kitchen table, through the hall and back to the living room where the ewe paused to squat on the shag carpet (beige, of course) in front of the television set! Pete caught a hind leg and drug her across the rug toward the door. The helpful homeowner jerked open the door admitting Ewe Number 2!

In small towns like Perdue news travels fast. It was standing room only for the working stockdog demonstration that afternoon!