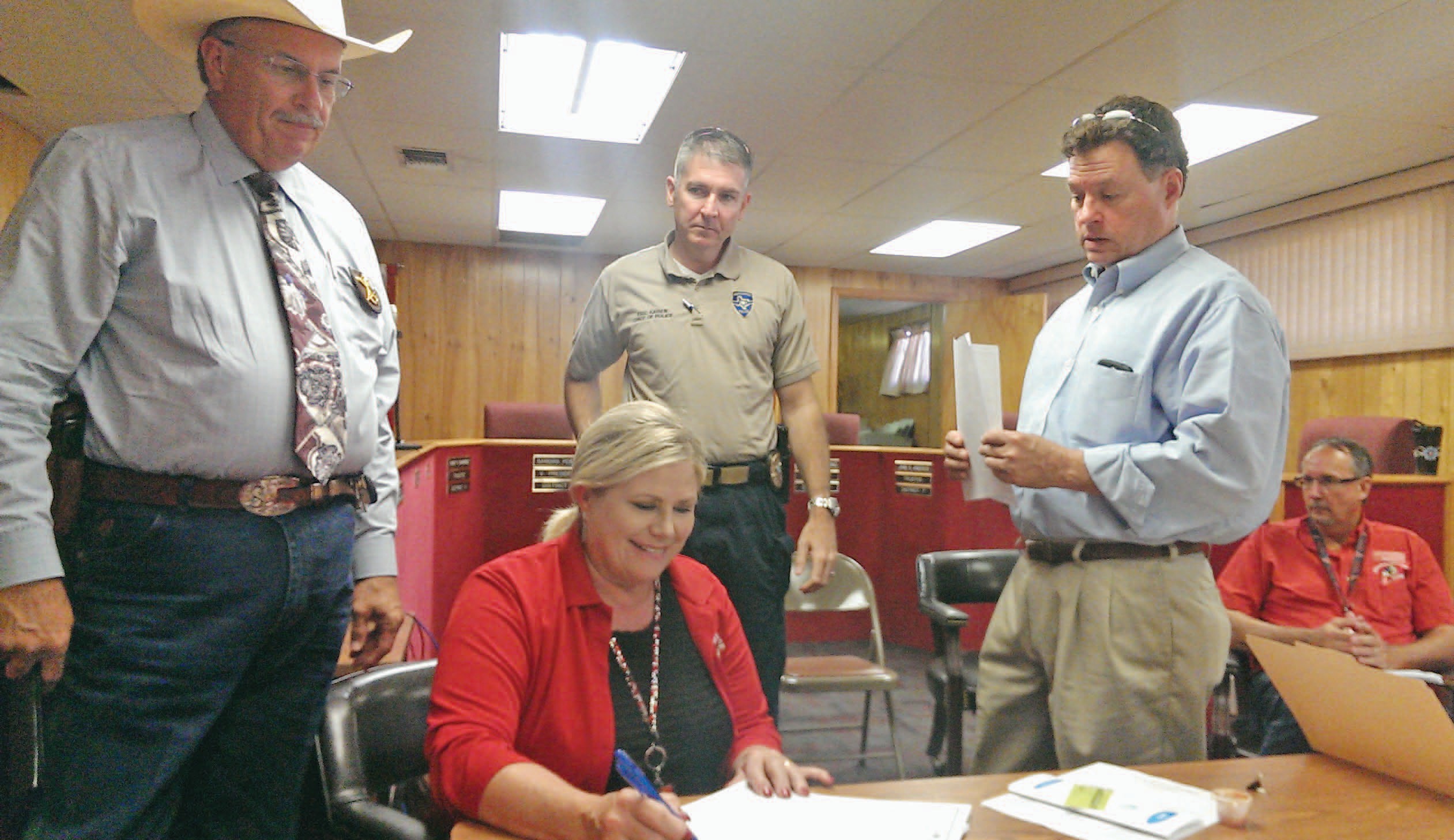 Jourdanton Independent School District (JISD) has signed up for a free year of a crisis communication emergency alert service that links schools to CopSYNC law enforcement software. The alert service, called CopSYNC911, provides a computer interface that connects school computers directly to police officers. JISD Superintendent Dr. Lana Collavo says that the system will allow her staff to summon the nearest five police cars equipped with CopSYNC from their computers just by clicking an icon.

Superintendent Collavo says that staff training is in the planning stages, but isn’t worried about her staff getting the hang of it. “It’s very easy,” Collavo says “You click the icon, and then it comes up and says ‘Did you mean to do this?’. If you say ‘yes’, it gives you an opportunity to explain and if you say ‘no’ it goes away.” Once ‘yes’ is clicked, a caller can use a chat window on their computer screen to text directly to any officers that are responding to the call.

Jourdanton Police Chief Eric Kaiser explains that without this program, a school staffer calling in an emergency would first have to call 911 and tell the dispatcher what was going on at the school. Then, that dispatcher would have to relay that information to the police officers. If the police officer needed information from the staff, he or she would have to go through the dispatch as well. This information bucket-brigade can result in confusion. “It’s just like the telephone game: the more you tell the story, the more watered down it gets. Sometimes the pertinent details are left out” said Chief Kaiser.

The program also sends the responding officers a schematic of the school, so that if a teacher were to say that a suspect fled out the door of the Jourdanton High School Gymnasium, the responding officer would be able to locate that door. But even if a teacher doesn’t have time to explain or even click “yes”, cars within the area will be notified within 10 seconds of the icon being clicked.

Jourdanton PD has had CopSYNC for little over a year, and encouraged JISD to look into the program.

In March, the Atascosa County Sheriff’s Office also purchased the software and hardware for 30 vehicles. Sheriff David Soward went before the County Commissioners in March this year to request funding. According to Sheriff Soward they unanimously approved a 3 year contract which cost the county $211,000.

The County Commissioners were familiar with the software; Atascosa County Constables had CopSYNC since 2012. Pleasanton PD, Poteet PD, and Lytle PD also have CopSYNC. JISD is the only school district to have the CopSYNC911 alert service in the county, however.

For officers, CopSYNC provides a virtual toolbox of information services, including but not limited to as warrant searching, a driver’s license reader and a call location history. Pleasanton, Lytle, and Jourdanton Police also have CopSYNC installed.

Soward adds that CopSYNC helps keep his officers safer using GPS data on the officer’s car location. “Even if the officer happens to get in a bind… we are going to be able to see where he is. Even if he didn’t have a chance to phone in on the radio first.” An officer equipped with CopSYNC can also bring up a map that has real time locations for all police cars equipped with CopSYNC anywhere in the US, and can zoom it down as far as a city street. If Jourdanton PD received an amber alert, Chief Kaiser, Sheriff Soward, or any officer could highlight every officer in south texas and send a text message directly to their onboard computer about the situation. Officers can also see their fellow law enforcement agents status in real time: if they are on a traffic stop, CopSYNC tells them.

Police Chief Kaiser is very pleased with the program “That’s a huge benefit, for all of us.” 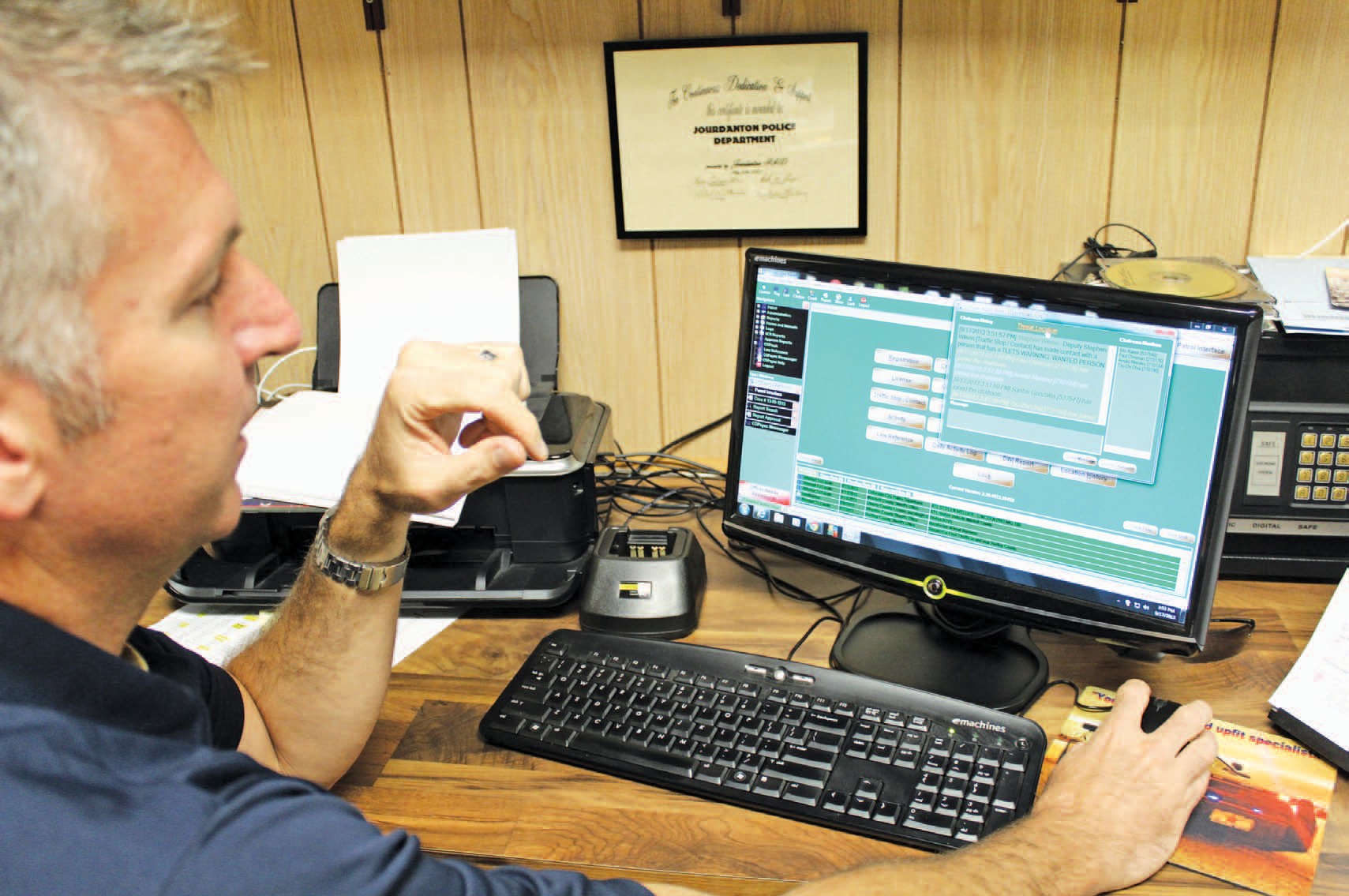 The CopSYNC desktop interface on Jourdanton Police Chief Eric Kaiser’s computer shows a map of all nearby police officers, showing their land speed and status. He can also highlight each one and send them a text message in real time.