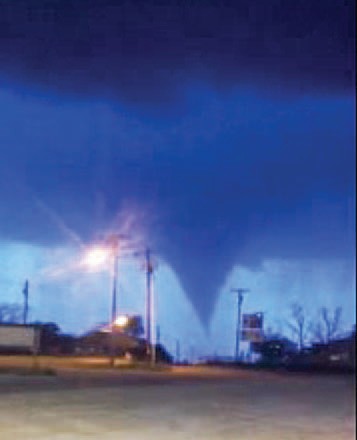 This photo of a tornado near Devine off of Texas Hwy. 173 was captured on a video featured on our website, pleasantonexpress.com.

Atascosa County woke up to a sunny Tuesday with minimal to no damage from the tornado and storms that tore through Medina County late Monday. Two tornadoes said to be EF2’s left at least 30 homes severely damaged and several destroyed in Devine and Natalia.

Three different waves of storms burst through Medina County. The first that included high winds, hail and tornadoes, which began near the Devine Airport.

“We have about 30 structures that are severely damaged and some of them are just total losses. The tornadoes touched down just outside of Devine and the second just north of Natalia. We also had lightning strike a home in Natalia,” stated Medina County Sheriff Randy Brown.

Included in the damaged structures were homes, a local eatery, a bar in Devine as well as two churches, one in the Devine area and one just outside of Natalia. A trailer home was also flipped just about a half mile outside of the Natalia city limits.

Approximately eight to nine people were injured with five transported to area hospitals.

Emergency crews were stretched to the limit in as basically every E.M.S., fire and police unit were responding to calls. From downed power lines, to a turned over 18-wheeler on IH-35 in Natalia, the scenes were not pretty. People were left without power and some had a tough time reaching emergency personnel.

“We had basically every resource we had available as far as emergency personnel out and about in the county. We were lucky to have deputies from Frio County, E.M.S. from Bandera County as well as Border Patrol out of Cotulla, Texas Parks and Wildlife and DPS assisted us during our busy and tragic night,” Sheriff Randy Brown added.

Photos, which have been posted on numerous San Antonio news websites, looked like something we recently saw with the tornado alleys up north. This has left many in the Devine and Natalia communities in shock, because tornadoes are anything but a common thing in South Texas.

According to Sheriff Randy Brown, the last time any type of tornadic activity occurred was in 2002 when storms hit the Hondo area damaging various homes and businesses.

“The last really bad tornado we had was in 1975 in the small community of Yancey. That tornado killed a few people I know,” stated Sheriff Randy Brown.

Two waves of storms came through Atascosa County, which resulted in heavy downpours and high winds. There were also sounds of a tornado reported outside of the cities of Charlotte and Poteet, but luckily none touched down.

“We have a reliable witness that did hear a tornado between about 8:45 p.m.-9:15 p.m. The second cell also had what we believe to be a tornado in it which was out in the Amphion area between 2146 and FM 1333 3-4 miles west of Poteet. One of our guys heard the tornado, but it never touched down,” stated Atascosa County Chief Deputy Sheriff, David Soward.

According to Atascosa County officials, damage in the county was minimal compared to that in neighboring counties like Medina and Frio.

“We had a few down and sagging power lines and a few trees down, but mostly just heavy rainfall. We did have a few of the low water crossings that were over the road, but had no incidents reported. We were lucky the major cells missed us,” stated Soward.

Mayor Clint Powell asked the citizens of Pleasanton to please contact the following service organizations to make donation to help our neighbors in Medina Counyt. Devine resident Gillian Irwin is currently collecting toiletries, which include the common household things people who are displaced would need (Shampoo, Deodorant, tooth paste, toilet paper, etc). She can be reached at 210- 844-7866. San Antonio News Station KSAT12 also hosted a phone drive on press night for the victims of the tornado. Anyone wishing to help is encouraged to call the Red Cross at (210) 224-5151. 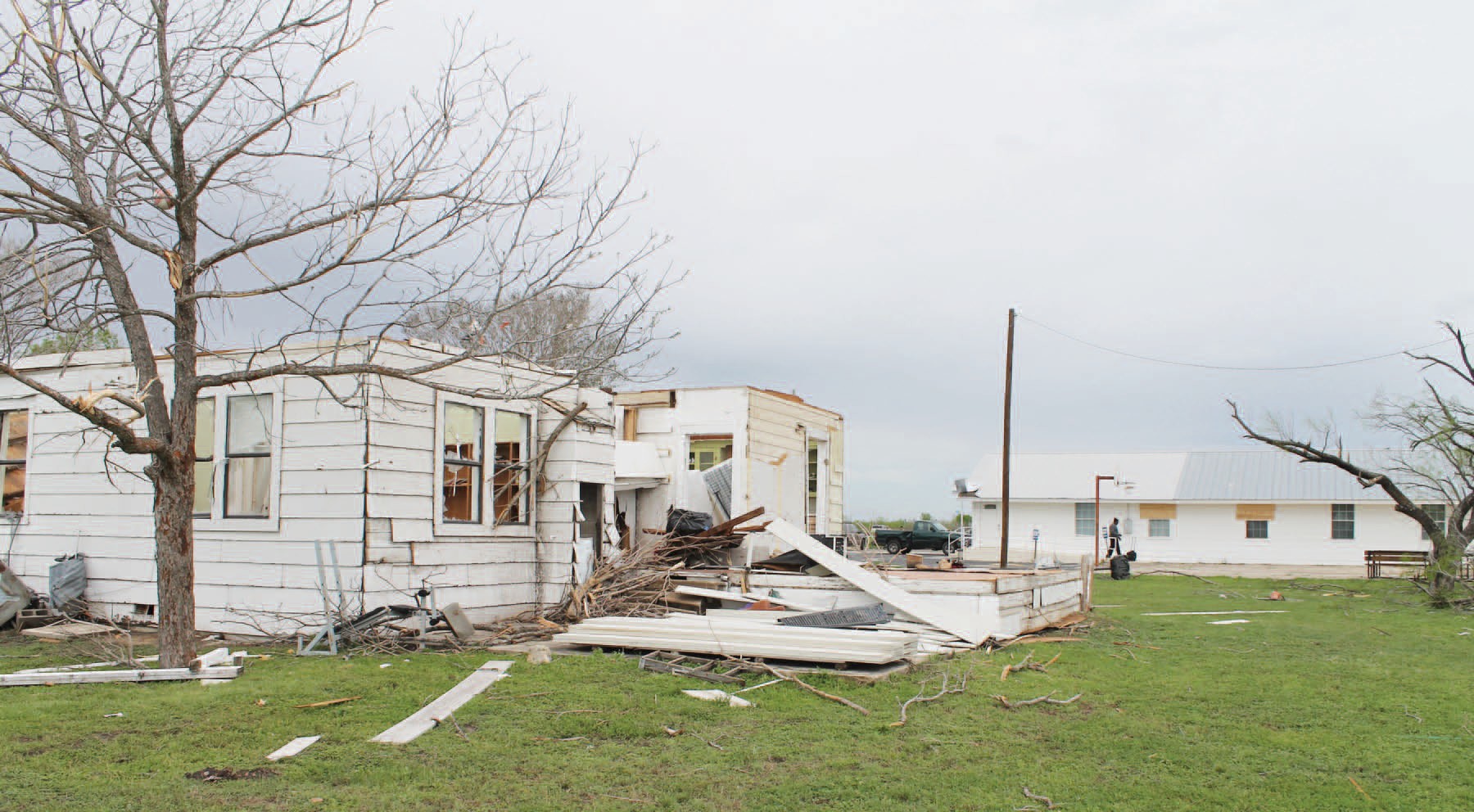 Country Baptist Church located on the corner of FM 471 and FM 463 out of Natalia suffered a total loss of this 4-bedroom home that was used as a Bible Study and Recreation area. 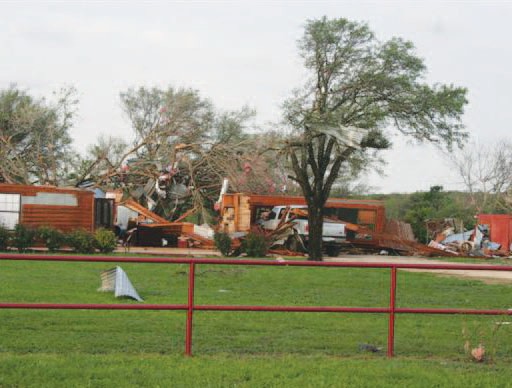 Thisiswhatremainsofa6roomloghome.Only one room had all four walls standing after a tornado roared through Monday evening, March 19, and that was the bathroom where a 16-year old girl and her puppy road out the storm.