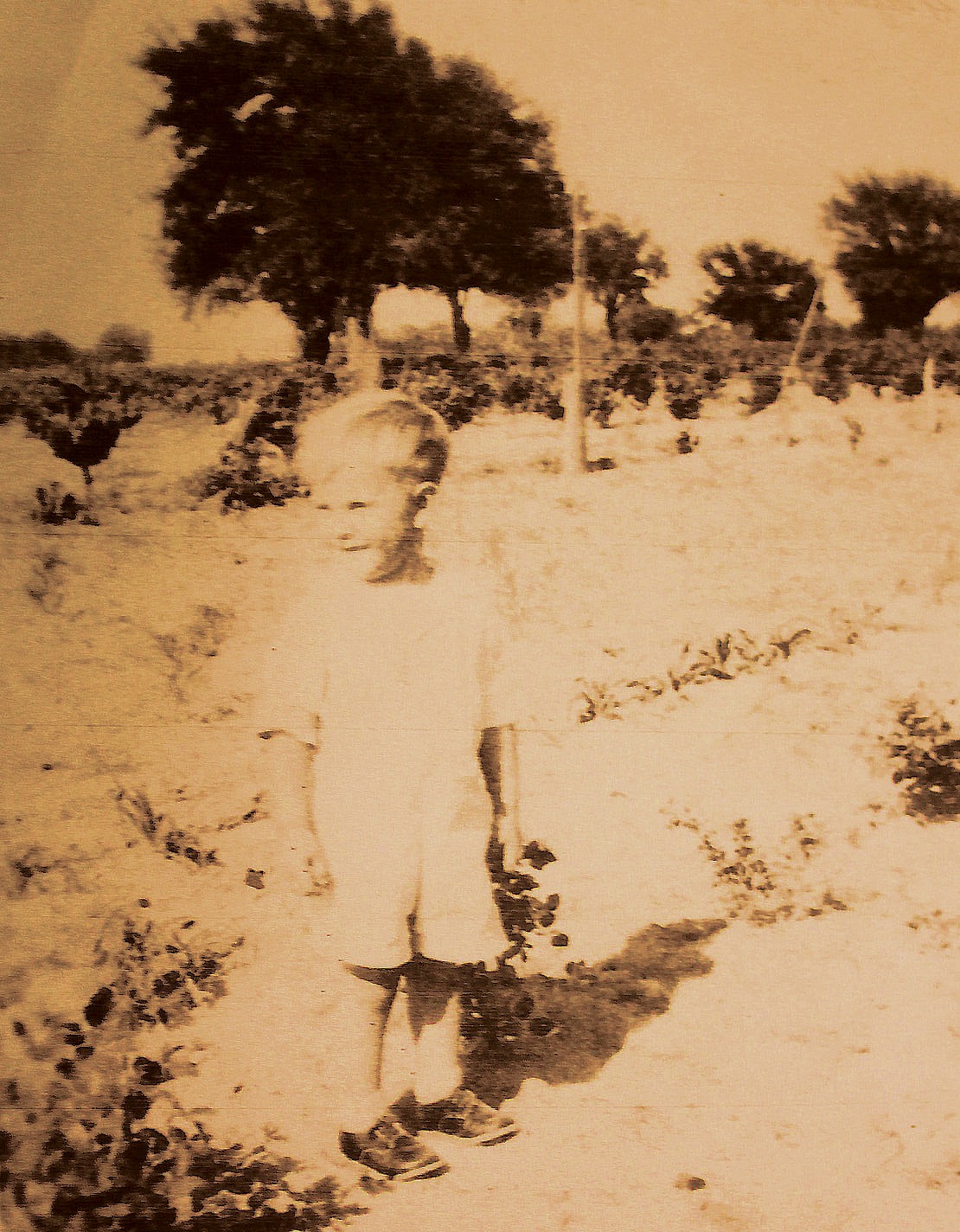 In 1938, at the age of 5, Norman Porter, in his grandmother Leona Brown’s backyard. This was on U.S. 281, north of Pleasanton. In the background is a grape arbor on what is now Repka property.

In his early childhood and later as a teenager, where did he play and find early adventure in life?

This is the beginning of many articles regarding “The History surrounding a Historian.”

“Well, I knew this country pretty well, I guarantee you.”

That was in the northern outskirts of Pleasanton on U.S. 281.

“There were ten children in my family, five boys and five girls,” said Norman.

I interviewed Norman on July 30, 2015, and was accompanied by Wayne Beyer, Pleasanton businessman, who owns about 300 acres of property northeast of the Porter home.

Before getting into Norman’s comments during the interview, let’s look at the remarkable life of this Atascosa County historian.

After retiring as principal at Pleasanton Junior High, Norman, in his ensuing years, researched and conducted countless interviews, seeking out the history of Atascosa County and South Texas.

Norman published many chapters of the history of Atascosa County that would have been lost in the annals of the past if it were not for his ‘unmatchable’ resolve in finding them.

Norman is the most important historian Atascosa County could have ever had with his untiring, relentless diligence in searching out our county’s past. One could tell that Norman loved ‘every bit of his work, recording the county’s history’.

Regarding the topic of Norman Porter, I’ve accumulated and am still accumulating stories from others in Pleasanton and Atascosa County who knew about and have interesting stories regarding where Norman grew up. This will be coming in future issues of the Pleasanton Express, regarding “The ‘old Breaker home’, Cockrell Canyon and a misnamed country road.”

To begin with, something stood out while Norman was commenting about his early childhood.

“Now, daddy would not let us go across the railroad tracks (an area west of 281). At that time there were hoboes all over this country and that was the reason he didn’t want us going over in that area,” said Norman. “He had just made it plain and clear ‘that you just don’t go over there’.”

Even so, Norman had ‘full range’ to play throughout his extended backyard into the area of Cockrell Canyon as a typical young boy. There was cactus, sticker burrs, rattlesnakes, but ‘what’s a young lad gotta’ do’?

Norman continued, “My grandfather had a nephew who was a bum, I mean, he was just a plain ole hobo and he would come around every once and a while.

“Somehow, the hoboes marked my grandmother, Leona M. Brown’s house, so that others would know this house would welcome them. They knew they could get something to eat. She always fed them.

I asked Norman about excursions into the Cockrell Canyon area. He replied, “I found arrowheads out there. Yeah, I found a beautiful one right down in the bottom of that dadgum’ canyon.” When asked if he had ever gone camping out in that area to which he responded, “Yeah! I went across that whole country, you betcha’.”

Norman said, “The Richters had this place from (Cockrell Canyon) there on down to (Hwy.) 97. They had property on both sides of the Galvan (creek that runs east of Cockrell Canyon).

“We used to go squirrel hunting around the canyon. There’s another good canyon back in this part (near the Porter home) not as deep as Cockrell Canyon, but it is a pretty big canyon.”

I mentioned to Norman about church groups and others, I heard, having picnics around Cockrell Canyon. He responded, “They probably did.

“But, all of us kids, we’d go back there and get squirrels and cook the squirrels. We did all kinds of things like that.”

Speaking of a place he owned on FM 3006, on the Galvan Creek, Norman said, “We used to fish over there on our property, that was about 100 acres. I caught bass in there that weighed three pounds. There was water in there that was anywhere from three to six or seven feet deep. At that time there was always running water in the Galvan.”

Beyer mentioned the Galvan Creek low water crossing on Crane (aka Crain) Road and Norman said, “There’s another creek that comes in from another direction there at the same place and joins the Galvan and this ole’ boy was trying to tell me the Battle of Medina took place in that vicinity but he hadn’t proved it yet.”

Beyer asked Norman what he knew about an old, native sandstone house about a hundred yards northwest of Cockrell Canyon. “I’m sure I’ve seen it but? Okay, yes, it was like an old junk pile, abandoned…a whole bunch of people have lived in that old house that’s blown over now,” said Norman.

Beyer said, “People came out there about 15 or 20 years ago and took all that cedar siding from the house.”

“Lost in time but not forgotten in memories.”

When you drive along the northern reaches of Pleasanton on US 281 north, you’ll find a ‘country lane’ heading to the east off 281 toward the newer Interstate 37.

This road, since the early 1900’s, had later been misnamed ‘Crane Road’.

On October 26, 2015, Attorney Iris Porter (Mrs. Norman Porter, Sr.) and myself sought the name change on the agenda of the Commissioners’ Court.

Commissioners’ Court, for postal and convenience reasons, decided to go with signage saying: CR Crane, and below, aka Crain.

When an early Atascosa County map was ‘put together’ is when the early ‘Crane’ spelling came to be. Such incidents happen in early maps. People didn’t always know the proper spelling of names of ‘old country roads’.

Somebody simply thought it was ‘Crane’ Road, not really knowing it was named after the Crain family residing in that area.

There’s much, much more to the story of that northern Pleasanton area than the road name.

The 300-acre tract of Beyer property extends on both sides of the road.

I asked Norman about any comments he would make about that area and Crain Road? “Used to be one of the worst roads in the country,” said Norman. “When going over the cattle guards on Crain Road, it probably was one of the slickest roads you could find. That’s the way I used to go up to my place (on FM 3006). “Then, when they tore the old courthouse down, they hauled a lot of the red rock and put it in the ditch along the south side of that road near the Galvan. There were also some huge pieces of concrete hauled in from the courthouse.”

Norman mentioned that the red rock used in constructing the old Pleasanton Jail came out of an area near the Sotello place in northwest Pleasanton.

I mentioned that Sue Brown, Pleasanton Express Editor, had lived in that area. Norman said, “Yes, she was a daughter of Leonard Brown.”

Norman, discussing early life in that area, said, “My grandparents lived here… let’s see, there’s one, two, three, four houses that had phones and those were party lines. We’d get into interesting things on those old party lines.”

Norman’s wife, Iris, mentioned that if you called a number trying to reach someone, the operator would know just about everything going on in the area from all the calls she would connect.

Iris said, “The operator would know about what time the person you were interested in contacting would be back at home, maybe saying nine o’clock or so. The operators knew everybody’s business, yes they did.”

Beyer noted interesting information about the history of the ‘old Breaker home’ he and his wife, Jane, live in. Not only that, but his property on the south side of CR Crane (Aka Crain), where there’s an unusual formation on the property called Cockrell Canyon.

Lost in history, but very interesting, are the stories about that property that once belonged to E. R. Breaker, a Missourian who was hired by the SAU&G (known as the Sausage) line.

What’s interesting is where the Beyer (formerly Breaker) home came from, not originally built there, but moved to its present location from North Pleasanton.

How the home was moved there is a “story of its own”. We’ll get to that in a later article.

Also, of interest, is the early history of Cockrell Canyon and all of the stories, about that unusual formation on the Beyer property.

Those stories come from Atascosa County citizens, some who grew up in that area north of Pleasanton and others who, in the early 1900s, went to that area for picnics and other fun times in their youth in the terrain around Cockrell Canyon. Boy Scouts led by Scoutmaster Clydell Haverlah would, at times, hike to Cockrell Canyon, starting at the Galvan Creek bridge area on Hwy. 97 at the east city limits of Pleasanton.

Myron Repka, who grew up in the area of Cockrell Canyon, speaks of a “double washtub” being used as a ferry in the Galvan Creek east of Cockrell Canyon and the spooky discovery of a mysterious campfire site – also about riding horses into the Cockrell Canyon area and how they got through the barbed wire fences. The Myron Repka copy will follow in a continuing article in the Pleasanton Express.

I’ve interviewed Lee Ricks Jr. and copy is coming where he speaks of himself and Jerome Brite riding in an open top Army jeep in Cockrell Canyon and other adventures there.

Larry Persyn has been interviewed and he provided interesting history about the whole area of Crain Road, Cockrell Canyon and the old Breaker home and how that home was transported to the area. To move the home to that location, being a railroad guy, Breaker, you can assume used railroad tracks, and you’ll find out how mules ‘fit in’. Persyn’s stories are coming.

J. Taylor Brite remembers Cockrell Canyon very well, in a period of time when he was a youngster – there were picnics and fun. His story will come later.

Randy Shearrer and Jack Persyn literally “had a blast” in Cockrell Canyon. Jack is a son of Larry Persyn. You’ll have details in a future article.

Roger Castillo, in a future story, talks about planting peanuts on a portion of Breaker land. “It was dry land peanuts and you know how that goes with dry land. It never rains until you go to thresh.”

To be continued: “History surrounding Norman Porter, Sr., the Historian”

As these articles unfold in coming issues of the Pleasanton Express, I’m sure I’ll become aware of other stories and, hopefully, find old photos taken in the area of Cockrell Canyon, Crain Road and the old Breaker home. Contact me by phone or email, 830.281.2341, lzabava@pleasantonexpress.com. 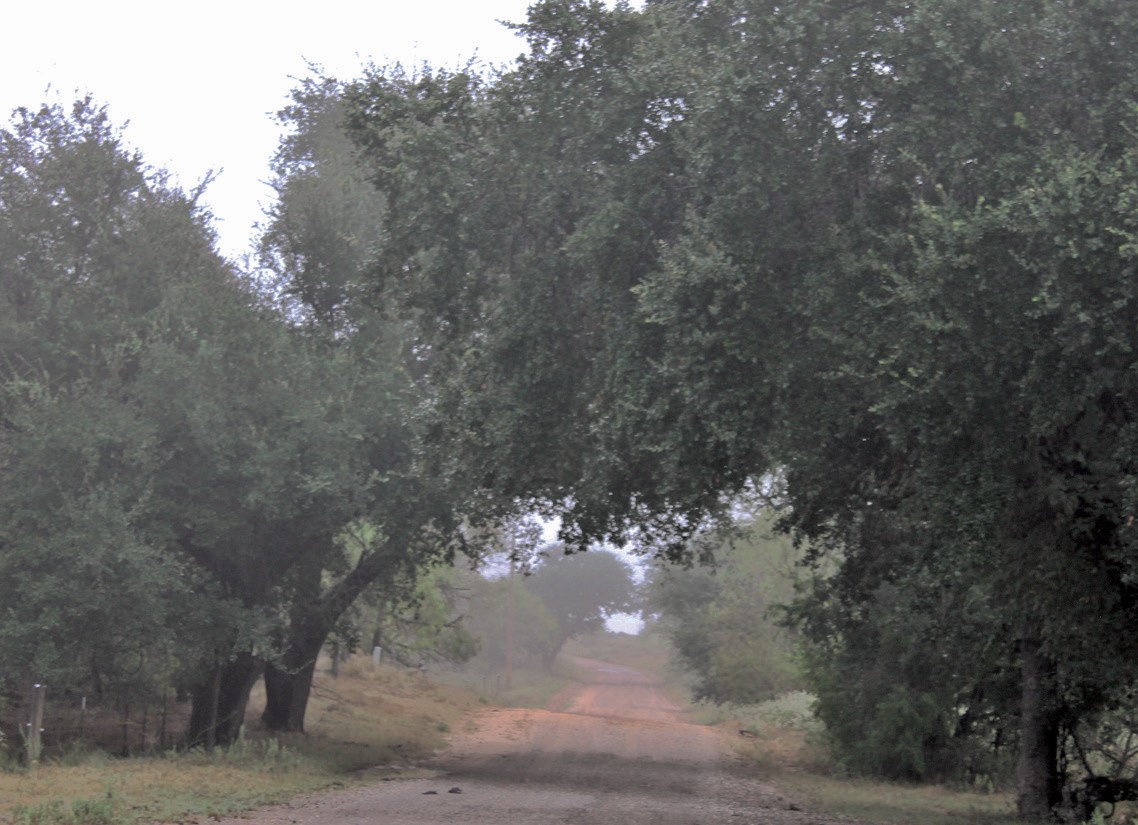