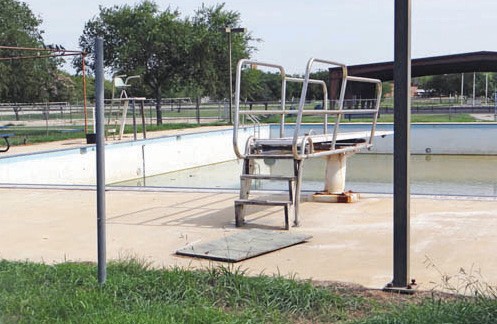 The City of Jourdanton may solve their pool problem if a new pool is approved to be built at the new baseball/ softball sports complex off of Hwy. 97 near the new municipal complex.

Jourdanton will see a new sports complex – specifically Little League baseball/softball fields – by the next season – as well as a new swimming pool, if all is approved.

The sports complex idea has been under discussion for the past four years or so.

The land that has been utilized by the Jourdanton Little League on State Highway 16 south was a tract of 10 acres. Thoughts of the expansion prompted the county to swap properties with the landowner, who had originally owned the SH 16 land. The land had been donated to the county for the sole use of little league.

The property is situated south of the new municipal building. The 27 acres measures about 750 feet deep by 1,500 feet wide. The same lease agreement will be honored by the county– $1 per year.

Not only will the larger area be able to more than double the field space – there will be two softball fields, two major fields and a senior field (which would be like a high school field) – it would allow the space for a new swimming pool.

This could all be done without raising taxes.

Jourdanton, according to HB 1315, can utilize Hotel/Motel Occupancy Tax funds to build the complex. During the 82nd Texas Legislative session, HB 1315 addressed the utilization of HOT funds. This bill, authored by then State Representative Jose Aliseda (R-Beeville), authorized the expansion of the City of Jourdanton hotel/ motel tax funds for the creation of a sports venue. The fields would be able to host baseball and softball tournaments satisfying the HOT requirements of “putting heads in beds” from visiting teams and fans.

The city was recently told by their attorney that a pool could also be constructed on the same sports venue location.

Some members of the Pool Committee raised concerns on the relocation from the city park to the proposed location, citing the convenience and accessibility. Mayor Susan Netardus said most were in agreement after they were told that taxes would not be raised and the ultimate goal was to have a swimming pool for the children to enjoy.

City of Jourdanton engineer, Raul Garcia of Garcia and Wright Consulting Engineers, Inc. in San Antonio, would be the Design/ Build engineer for both the pool and the fields. Garcia recently designed the softball field at Texas A&M. He hopes to have a preliminary schematic of the site in a week or so.

A street is planned to be made to the west side of Retama Manor to allow access.