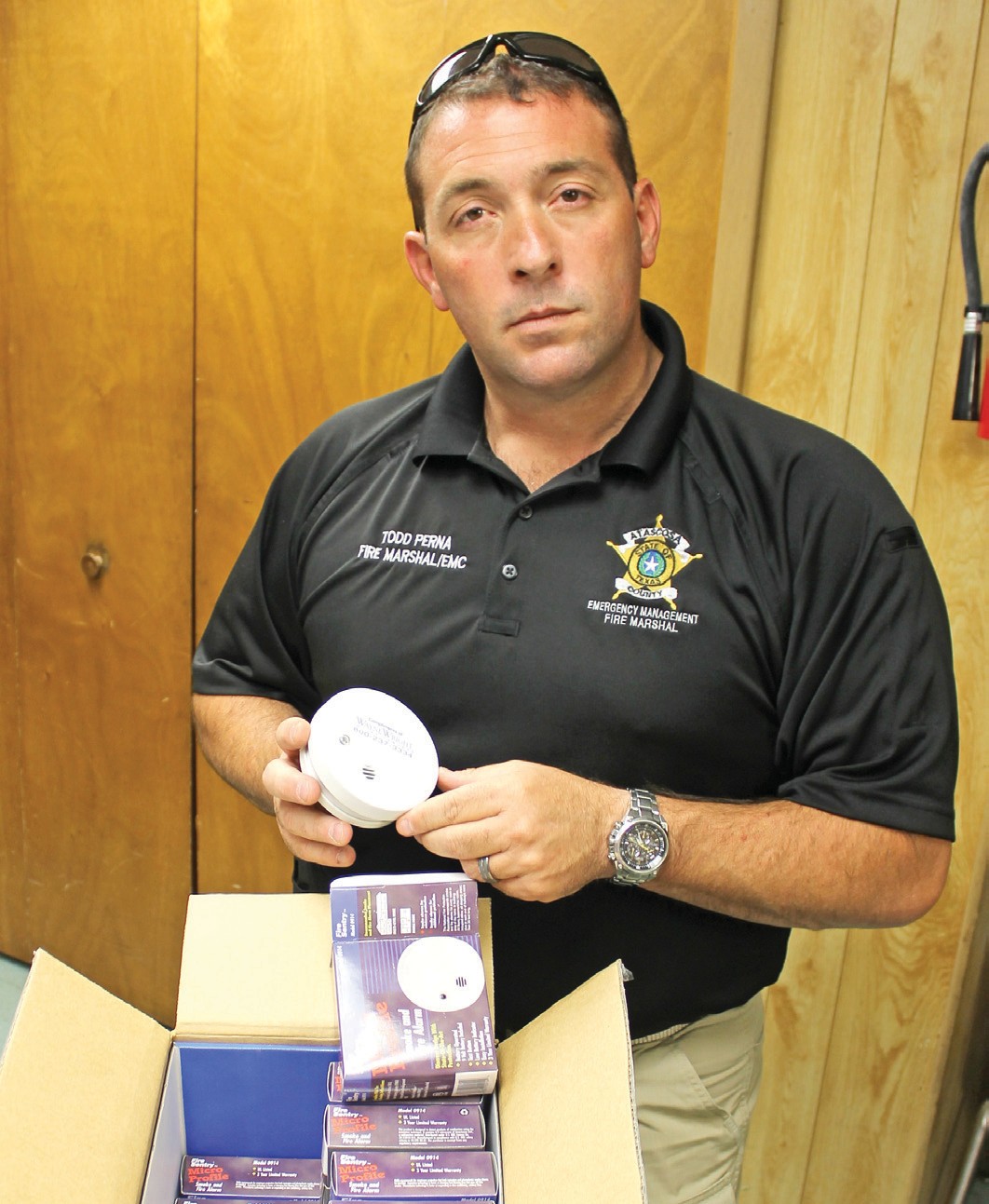 The county’s 11 volunteer fire departments will install them at no charge in the homes of families that cannot afford them. No family should be without smoke alarms. THEY SAVE LIVES!

BRING YOUR KIDS TO THIS EVENT: They’ll meet “Sparky, the Fire Prevention

Clown” from the Poteet VFD. Fire trucks will be available for kids to explore. They’ll have fun in the Pleasanton VFD’s Fire Safe House and learn what to do if there is a fire in their house!

• Smoke alarms save lives. Smoke spreads fast in house fires. A smoke alarm will help you get out in time.

• Almost two-thirds of home fire deaths resulted from fires in homes with no smoke alarms or no working smoke alarms.

• The risk of dying in reported home structure fires is cut in half in homes with working smoke alarms.

• Majority of residential fire fatalities occur between 11 p.m. and 7 a.m., when most people are asleep.

• The smoke detector was invented in 1890 by Francis Robbins Upton.

Pictures of each department and the business community which show their gratitude are on pages 13C and 14 C in this issue.

The actual location of Ata-Bexar “County Line” VFD is just a few yards inside Bexar County on Old Pleasanton Road, but they respond to a large number of fires and wrecks in Atascosa County. They are also medical first responders. The department has been in service for over 30 years. Anyone in the northern Atascosa County area that is interested in joining this department should know they hold business meeting on the fourth Thursday of each month at 7 p.m.

The Campbellton “Paisano” VFD collects community dues — an annual donation mailed in by Campbellton area residents. However, the department’s area also covers an area that includes McCoy, Peggy and Fashing.

The department is always in need of both members and donations. “Paisano” firefighters cover most of the southern and southeastern portion of the county. They are often called for assistance at accident sites on IH-37. The department’s officers include: Fire Chief Martin Llamas Jr., Asst. Chief Homer Garcia, Secretary/ Captain/ EMT-B Chris Llamas, Lt. Joe Sotello and Treasurer Dora Llamas. Those interested in becoming volunteer firefighters may contact the fire chief at 830-256-4456. Join them in their fundraiser “Turkey Bingo” and more this Saturday, October 11. Brisket and sausage tacos/sandwiches will be served starting at 5 p.m.

Donations are always needed. Money raised helps the department maintain their equipment and allows the members to receive related training and to purchase needed equipment.

The department is inviting area residents to come and join them for the Charlotte VFD Firemen’s Barbecue to be held sometime in November. The profits will be used by the department for operating costs and equipment.

This department has a very big need for volunteer members. Even if you are a resident living near Hwy. 173 to the north or the McMullen County line to the south, please volunteer.

The department’s area of responsibility is the largest of any area in Atascosa County. It extends from Hwy. 173 south to the McMullen County line. The department is also one of the smallest in number of members. The department could certainly use additional members and the community’s support. Officers in the department include: Fire Chief Robert Romo, Asst. Chief Jerrod Roberts and Sec./ Treas. Clarissa Romo.

Christine’s VFD is looking to add new members. The current members have been working hard to keep their equipment running and need donations to help fund purchases of necessary gear.

The department’s area of responsibility covers the south central portion of the county.

Anyone interested in joining the department should contact one of the members. They meet the third Tuesday of the month at 7 p.,m.

Jourdanton VFD has a large area of responsibility in the center of the county. It reaches southward near Christine and northward toward Poteet. The east and west boundaries are bordered by areas covered by the Charlotte and Pleasanton departments. Jourdanton fire-fighters are in need of volunteers and donations. The department answers about 200 calls each year that are fire or wreck related.

The department will be demonstrating fire prevention and offering tips at the Jourdanton schools this week..

Lytle, Texas 78052 The Lytle Volunteer Fire Department was established in 1955. It covers the northwestern corner of Atascosa County. However, their responsibility does not stop there.

They are dedicated to the prevention and suppression of fires, as well as response to medical emergencies and other incidents in Lytle as well as Atascosa, Bexar and Medina Counties

The Pleasanton VFD has typically been the largest department in the county. With the size also comes a large area of responsibility in fighting fires. It covers an area from between Jourdanton and Pleasanton on the west to the Wilson County line on the east.

There has been a decline in department membership as the area’s workforce has taken jobs in the oil and gas industries. They are no longer available to respond to fires while working for large and sometimes distantly located companies.

The department also supports a large rescue unit which includes Jawsof Life equipment. In addition, the department’s members also train in water rescue. It is also custodian of a communications van designated for regional homeland security.

Chuck Garris, is the department’s Fire Chief. Chief He is now the first paid Fire Chief in the VFD’s history.

The department trains every Monday night at 7:00 p.m. They have been demonstrating fire safety this week to area daycares and schools.

The Poteet VFD is located in the heart of the Strawberry City on Avenue H. The fire station is also home for the large strawberry monument, the Poteet family monument and the Poteet Canyon monument. Poteet VFD is in need of additional members and would especially like to have more firefighters who can respond during the day. The department is in need of several pieces of equipment.

The department’s area of responsibility reaches northward to the Blackjack Oak area south of Primrose. To the west, the area reaches almost to Rossville. The eastern boundary is near Leming and goes south to the area covered by Jourdanton. In addition to hosting a National Night Out, holding a demonstration all day at Poteet Elementary on Friday, gathering at the courthouse on Saturday to help distribute free smoke alarms – they will also assist in parking at St. Philip Benizi Church festival this Sunday.

Primrose VFD meets on the 2nd Friday of each month at 7 p.m.. Come and be a member. They always need donations of money, water and non-perishable snack items.

They will be holding a Fall Festival/Market Day on Saturday October 18. Contact Veronica at 830- 742-4800 and leave a message.

Rossville VFD is in a totally rural area and covers a large area that wraps around Lytle’s area of responsibility. It reaches northward to Bexar County and westward to Medina County.

The department has been gaining new members, but they certainly need your financial support.

The department began in 1989. Rossville VFD meets on the first Monday of each month at 7 p.m. at the Rossville Community Center.

These firefighters are able to protect our community because they have the support of their employers. These businesses deserve much needed thanks. The auxiliary groups are another facet of the volunteer fire departments. They work to raise money and help feed and hydrate the firefighters during prolonged battles.