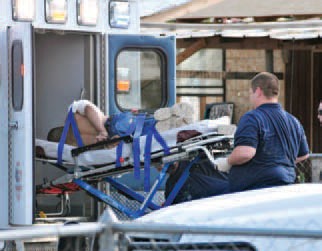 A suspect was taken to the hospital after a police dog bit him when shots were fired at Poteet Police Chief Chavez.

At around 7 p.m. last Wednesday, Chief Martin Chavez tried to pull over a pickup truck off of Avenue L and 9th Street for a traffic violation.

Before he could get to the vehicle, the driver moved it forward. He ordered him to stop and then the driver’s door clipped Chavez. “I drew my service revolver and shot once,” he said.

A passenger in the vehicle then allegedly fired two shots at the chief after moving another 20-30 yards. Chavez shot four more times. The duo then exited the vehicle and ran away. “Nikko” the Police K-9 stepped in and subdued the suspects and bit one of their arms. Within minutes they were apprehended.

Chief Chavez was quick to point out that the law enforcement in the county came out in full force. “You look at these little cities and you don’t know how many are there, then they are here when you really need them. It was an amazing combined effort with the DPS Troopers, the Atascosa Sheriff’s Department,” he said.