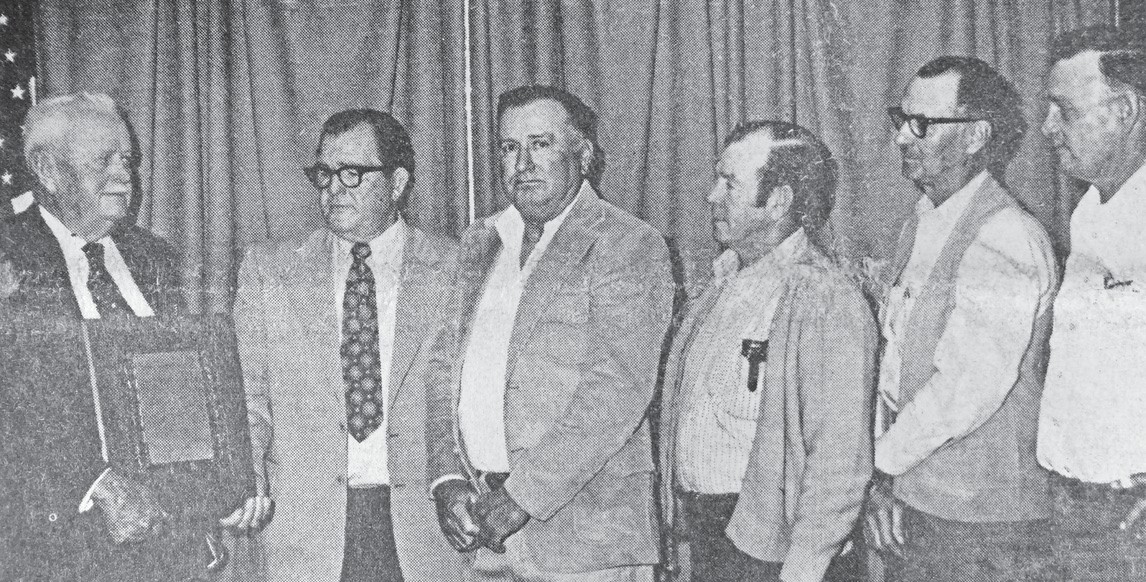 Halff Coward, sheriff of Atascosa County for 16 years and a deputy for four, was presented a plaque of appreciation by the county commissioners Monday. Left to right are Ex-Sheriff Coward, County Judge David Davidson and Commissioners Buford Wilson, Bill Westbrook, Cecil Bynum and Smith Tausch. Express photo originally published in the December 12, 1973 edition.

Pleasanton – where the many business houses are decorated for Christmas is rapidly becoming Santa Claus U.S.A. for this South Texas shopping area. This fact is being accentuated by this special Christmas shopping addition of the Pleasanton Express. A thousand extra copies are being distributed in the county. The edition bulges with Christmas shopping specials and gift suggestions. “I honestly believe Christmas shoppers can find anything they need in Pleasanton, and at prices that are in line with those of other towns and cities,” said A. D.D Scott, manager of the Retail Merchants association.

Highway patrolmen are looking for a hit-run driver who fled from the scene on foot after this motor car had collided with another car a mile east of Poteet on FM 476 about 8:30 o’clock Friday night. Officers said that the hit-run driver attempted to pass a truck and sideswiped the machine of Lazaro Huizar, 27, Poteet, who was coming from the opposite direction. The hit-run driver’s car, a 1947 Chevrolet sedan, went into the ditch and ran into a fence. He raced away from the scene on foot. The machine bore a Michigan license. The officers are looking for a Poteet resident who has been working in Michigan. No one was hurt in the accident but extensive damage was done to both machines.

Poteet whooped it up Saturday night! The Poteet Aggie band, pride of the Strawberry City, copped first division honors at the UIL marching inspection contest, Saturday, for the first time in four years. The Aggies, a little threadbare from work, and their director, Joe Park, worn and wan from work plus worry, were elated. So were their many, many fans who know this just had to be the year.

Pleasanton school trustees will name an architect soon to draw plans for a proposed school expansion program. Board members are expected to confer with two architects and possibly make a selection next Tuesday evening. “We’ve visited schools which both these architects designed and talked to the people who are using the school plans,” said Supt. J. Henry Perry. Meanwhile trustees spent a lengthy session last night studying proposals for an expanded curriculum which would include a beefed-up program in high school.

April 1 was set as the trial date for Leonard Freeman, 28, ex-Frio countian, who has been indicted for the murders of Deputy Sheriff and Mrs. Luis Garza near Charlotte last July 18. Judge John F. May announced the trial date after conferring with Freeman and his court-appointed attorneys in a district court session here Friday. Olin Strauss and Tom Franklin, defense attorneys, are expected to file motions with the court shortly after the first of the year. District Attorney J. Taylor Brite has filed formal notice that he will seek the death penalty when Freeman is tried for the murder of Deputy Garza.

PHS freshman cager Terry Monroe led his teammates to victory in the consolation bracket of the Southwest Freshman basketball tournament last week. Shooting 45 percent in the game tourney, Monroe averaged 19 points a game. He shot 53 percent from the free throw line and on defense averaged 13 rebounds a game. A fourth quarter comeback led by Monroe fell one point short in the first round of play against New Braunfels Canyon.

A large dog was a contributing factor in the one-car rollover which injured two Atascosa County teenagers Sunday, Dec. 4. The accident occurred according to Texas Highway Patrol Trooper Ronnie Lawson, at 5:40 p.m., 3.4 miles north of Poteet on Highway 16 when 18-yearold Thomas L. Ellison, IV, Somerset, driver of the northbound 1981 Toyota 4-wheel drive pickup involved in the accident, swerved into the southbound lane to avoid hitting a large dog which ran in front of his vehicle.

Charlotte’s Mayor Marcos Ybarra, Jr., announced this week that the city of Charlotte will sponsor a city-wide clean-up campaign from Dec. 8 through Dec. 21. “We want to spruce up for Christmas and we encourage anyone with questions to call city hall at 277-1414 for further information,” the mayor said.

The subject of this weeks Crime Stoppers is theft and vandalism of highway and street signs. It may sound like just kids playing pranks or getting signs to decorate their rooms at home or at college; however, according to Pleasanton resident engineer Gene Clement, Texas Department of Transportation the matter is very serious, life threatening and is reaching what may be termed epidemic proportions. The signs may range from $20 to $200, depending on the size; however the cost of replacement mounts up a monthly cost of $4,000 or more, just for Atascosa County.

Frances Shahan was recently named outstanding club woman for the Alamo District of the Texas Federation of Women’s Clubs. Frances Shahan is a very special person – loyal, doer, dependable, compassionate, responsible, creative, an organizer, and a motivator. She is currently serving her second term as President of the Pleasanton Woman’s Club. She serves as Public Relations/Communications person for the Alamo District.

Sunday, December 7, was marred by burglaries. This time, however, the incidents investigated by Atascosa County Sheriff’s Office deputies were burglaries of a vehicle. Deputy Jack Snyder was called to Charlotte’s town square Sunday morning to check out a burglary of a vehicle. The owner told Snyder that he parked his Dodge Shadow on the square. When he returned, he found his rear window broken. Deputy Snyder later was dispatched to the Oasis Bar on Texas 97 between Pleasanton and Jourdanton. Snyder learned that the vehicle’s owner had been in the bar for fifteen minutes when someone came in and said the Chevrolet Monte Carlo had been broken into.

The annual Christmas lunch will be held at the Pleasanton Senior Center on Thursday, Dec. 11 at 12 noon with a $5 donation suggested. A gift exchange will follow for those who wish to participate. Please bring a gift for the same gender as yourself, marked for a man or lady. It should be between $5-$10 value. A fundraiser breakfast will be served on Saturday, Dec. 13 from 8-10 a.m. at the center. Treat your spouse or a friend to breakfast and help the center at the same time.