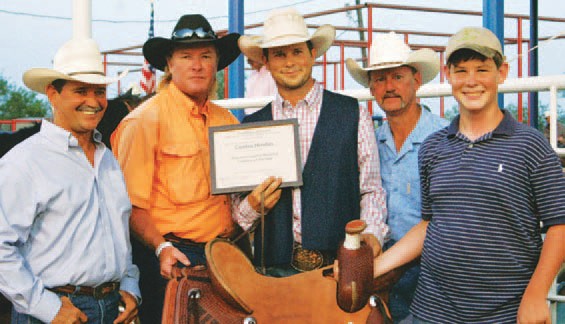 Each year, Pleasanton goes in search of a special person that displays the quality, the knowledge and the essence of a genuine cowboy. Not one that just looks or talks the part — but, a real cowboy that rides a horse, ropes and brands cattle, burns prickly-pear for the herd, mends fences and would not trade it for anything.

We’re looking for a working cowboy to be honored at this year’s celebration.

Nominations are being accepted for the 2012 Cowboy of the Year as well as for inductees into the South Texas Cowboy Hall of Fame.

The winners will be announced at the Friday night rodeo, August 17.

Cowboy of the Year nominations must be working cowmen and reside in Atascosa County.

South Texas Cowboy Hall of Fame nominees must have worked in Atascosa County, but no longer have to be active or living in the county.

Those submitting nominations should include the following information:

• Years of experience as a cowboy;

• Overall knowledge and ability with a horse;

• Ability in working with the trailing cattle herds of various sizes in the brush country;

• Knowledge of cattle habits and ailments;

• Character and dependability; and

• Why the person making the nomination believes his/her candidate is worthy of the Cowboy of the Year title.

A committee of former Cowboys of the Year will judge the entries.

The Pleasanton Express will act as roundup headquarters for entries, which should be sent to:

Atascosa Cowboy of the Year

The nomination may also be emailed to sbrown@pleasantonexpress.com or brought to the Pleasanton Express office at 114 East Goodwin before the 5 o’clock sharp, July 27 deadline.