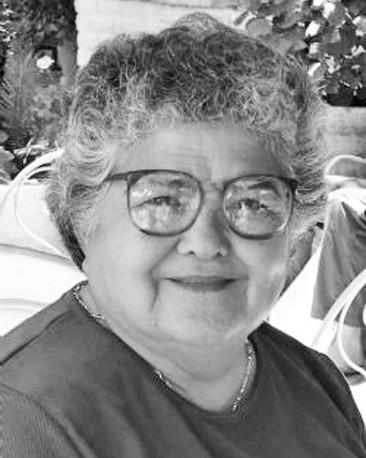 Santos Gutierrez, age 80, of Pleasanton, began her journey to the Gates of Heaven on Friday, February 27, 2015 in San Antonio surrounded by family. Santos was born on July 5, 1934 to Juan DeDios and Flora Cano Guerrero in George West.

After her mother’s early death, she was raised by her loving step-mother, Antonia Lopez Guerrero. She enjoyed going to dances with her cousins and on one occasion, met a handsome young man, a future radio DJ, named Enrique (Henry) Gutierrez—El Muneco. They married a year later and moved to Pleasanton when he accepted a job with Dr. Ben L. Parker at K.B.O.P. Santos dedicated her working years as a health-care provider, both in Beeville and Pleasanton. Santos and her husband loved cooking, baking and BBQ’ing. They had a specialty hot sauce that they often prepared. This sauce was later developed into the Santitos Salsa hot sauce product. She was honored and humbled that her son placed her image on the salsa jar. She also enjoyed participating in several salsa events.

While living in Beeville, she attended Our Lady of Victory Catholic Church. She became a member of St. Andrew Catholic Church upon her arrival to Pleasanton and became an active member. Santos served on several board positions with the Catholic Daughters of America, St. Andrew Guadalupana/ Guadalupano Society, and La Federacion de Guadalupanas as well as numerous committees. Santos especially enjoyed being around her grandand great-grandchildren.

Visitation will be held at Hurley Funeral Home, Pleasanton, from 2 – 9 p.m. with a rosary to be recited at 7 p.m., Wednesday, March 4.

In lieu of flowers, memorial contributions can be made to St. Andrew Catholic Church Building Fund.

Services will conclude at Hurley Funeral Home after the rosary. Santos will then have a rosary on Thursday, March 5 at 7 p.m. in Beeville at Trevino Funeral Home at 401 W. Springer Street.

For more information please visit the website at www.trevinofh.com or you may call 361-358-1660.