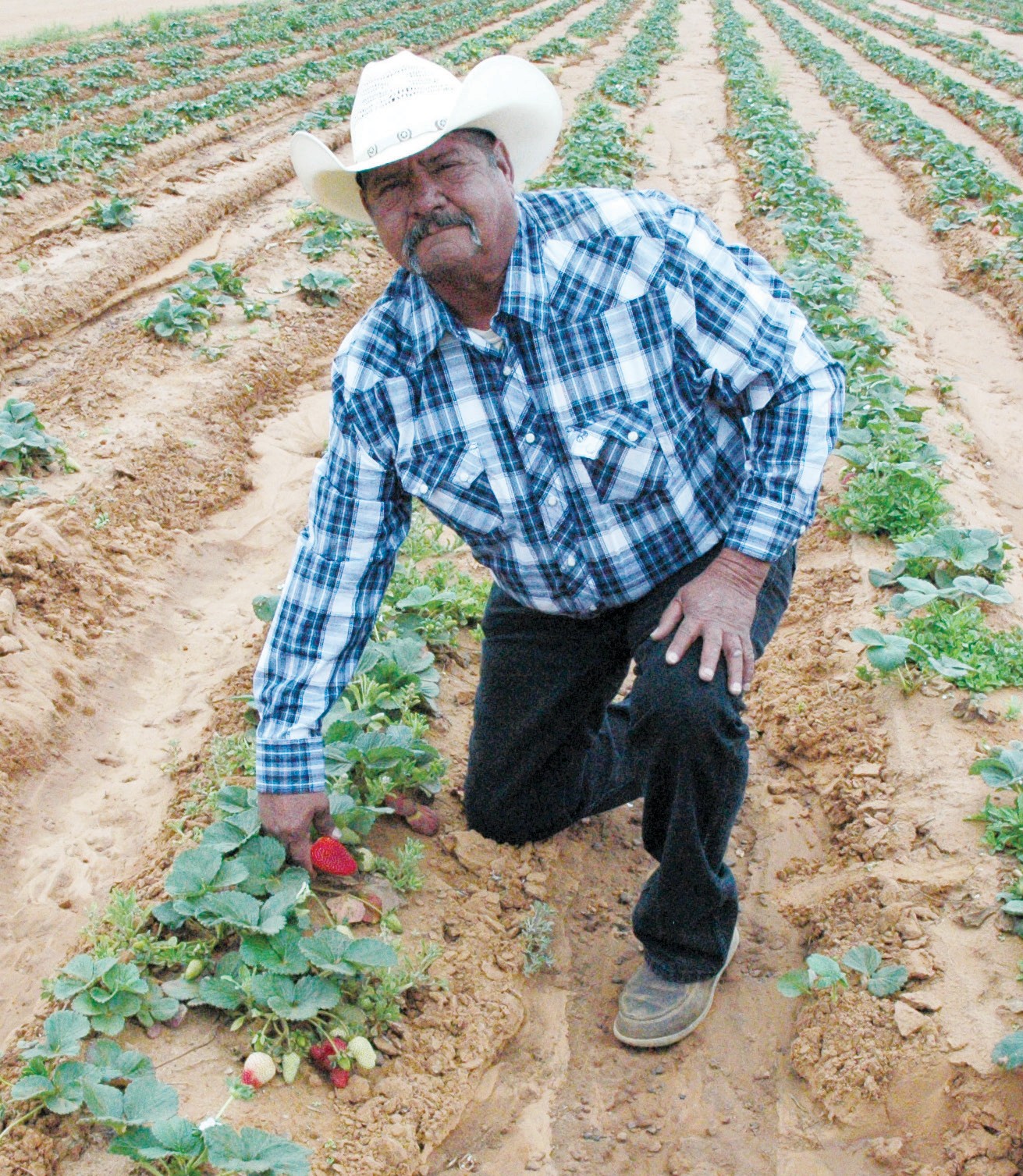 Posing with some sweet strawberries is David Reyes who was named the 2014 Strawberry Grower of the Year. Reyes will compete next weekend, April 4-5, at the 67th annual Strawberry Festival. The auction will take place on Sunday, April 6 at 2 p.m. inside the Rotary Club Pavilion.

The dirt road that leads to this year’s Strawberry Grower of the Year isn’t hard to miss. The big metal cut-out “Reyes” sign with a strawberry next to it, plus the street sign “PaPa Reyes Ln.” directs seekers to several patches growing the sweet strawberries.

The annual designation is sponsored by the Poteet Rotary Club.

David Reyes, a fourth generation farmer in the Poteet area, has been named 2014 Strawberry Grower of the Year. Reyes has placed every year with his strawberries, winning Reserve Grand Champion in 2006. He also has won the Biggest Berry contest four years in a row.

His brother, Albert, is also a grower who farms on his portion of the family place. They have around 60 acres at their location on Brown Road just off of FM2504, west of Poteet. The family was recognized in 2011 at the state capitol during the Heritage Land ceremony citing their ownership and farming for over 140 years in Atascosa County. Another brother, Richard (who passed away last year on January 11), was honored as Honorary Strawberry Grower last year.

There are three different patches on roughly three acres where he grows three varieties –Albion, Chandler and Seascape – in the red dirt on his farm.

“My son and nephew help me. During the big day of Strawberry Festival, my family and friends all come in help,” Reyes said. “It is difficult to find workers these days,” he continued. When asked about the future of farming the berries he replied, “It’s going to go down. Young kids don’t want to do this anymore.” Reyes’ son David Edward is a big help, but he has a full time job as an assistant manager of the Rossville based King Ranch Turf Grass. Looking back at the list in 2003, there were over 43 growers. This year there are 23 growers listed in the area.

Reyes’ primary farming includes hay. That’s where the money is, especially during this dry period.

The cooler weather of late is affecting the ripening factor right now. With Strawberry Festival next weekend (April 4-6) , he is hopeful that the weather forecast

80 degree days will be forthcoming.

Reyes’ red clay soil yields great strawberries. “Some farmers prefer a sandier loam, but this is what I have,” he said.

It takes about six hours to harvest, pack it, haul it into town he explained. His son uses Facebook to help market the sweet berries. They will take orders and deliver them. He visits the school, hospital and other places. That is easier, because he knows that they are all sold, and doesn’t have to deliver them until the afternoon. “Sometimes if we have excess, we will have someone on the west side of Hwy.16 near Ditto Road to sell,” said Reyes. Reyes also has preserves made from his strawberries. They are available at the festival store.

Reyes’ strawberries will be among the other growers for the annual contest and auction, which will be held at 2 p.m. on Saturday, April 5 at the Rotary Pavilion. 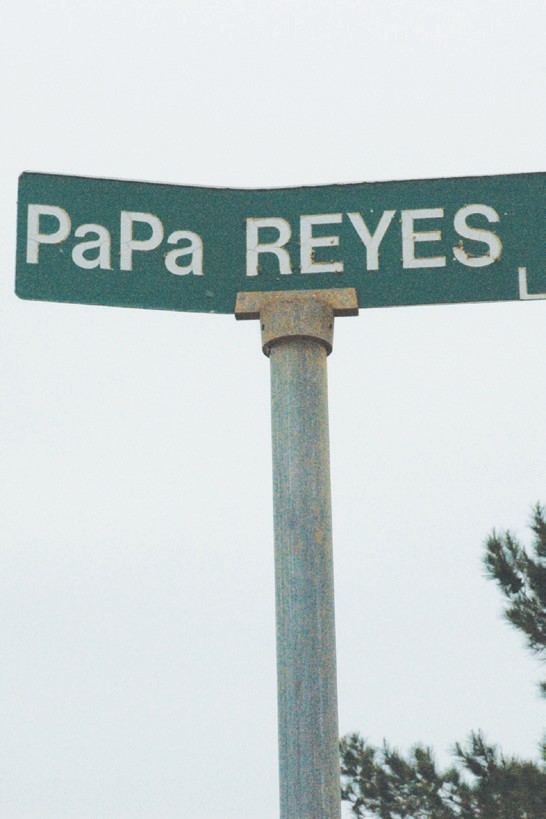 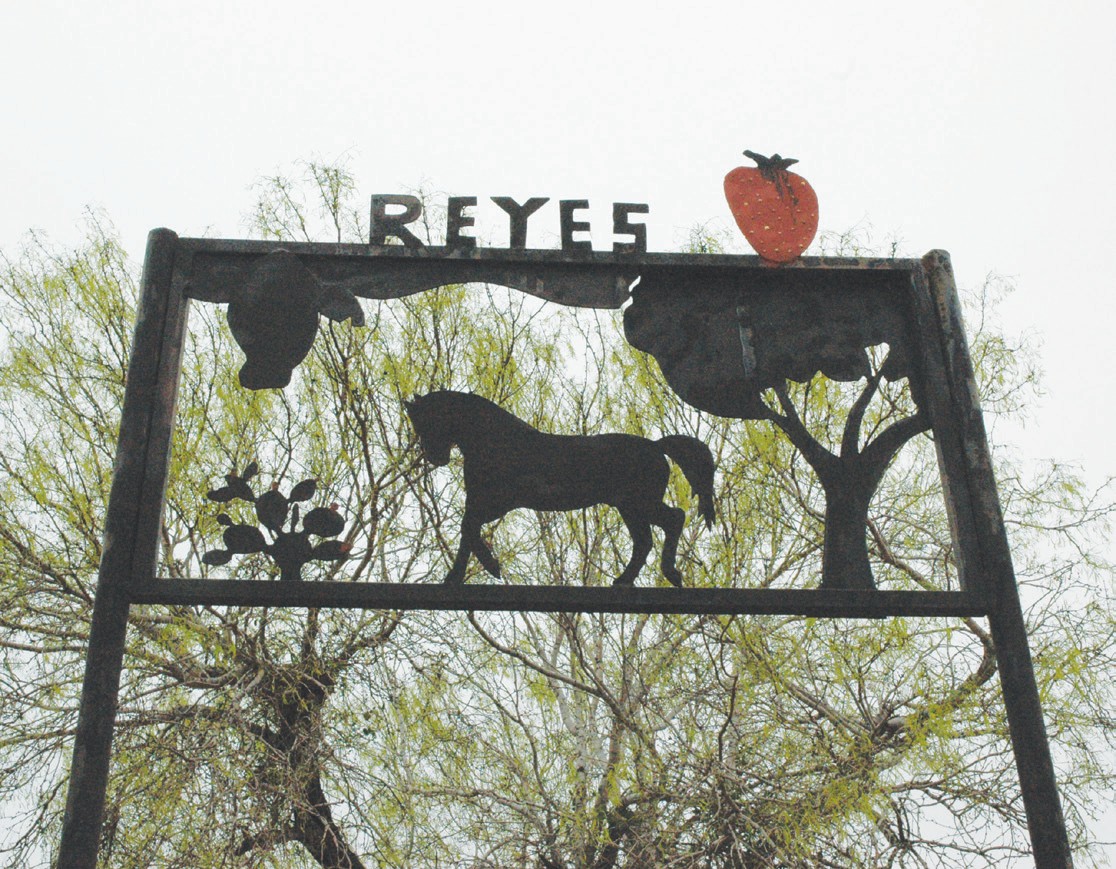 These signs direct you to the 2014 Strawberry Grower of the Year, David Reyes, farm near Poteet.