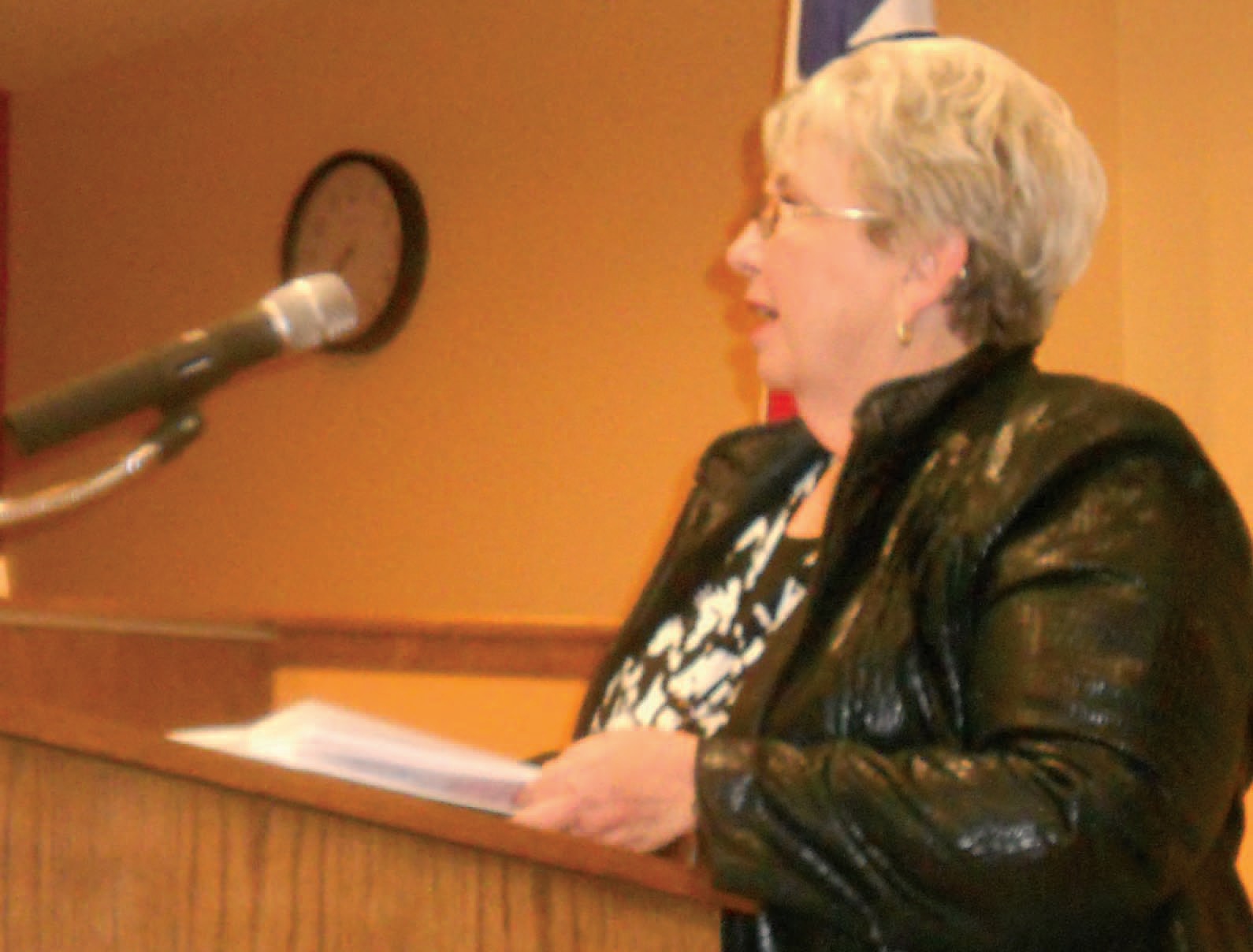 Judy Havins urged the council to reconsider their decision and to close Main Street.

The status of the Pleasanton Community Center and Library continued to be a topic of debate at the Nov. 17 Pleasanton City Council meeting. Fortunately, the chaotic scene of the previous meeting did not repeat itself.

At the end of Citizen’s Comments, Mayor Powell told the audience he wanted to reiterate that they would be allowing debate.

“Arguing and debating are very similar in definition,” said Powell. “In the definition of argument is the word quarrel and a quarrel is an angry discussion. So we will be debating tonight.”

Councilmember Gallegos began the discussion on the status of the community center and library plans, as directed by the council at the Oct. 20 meeting. Oct. 20 is when council voted 4-2 to direct architect Robert Guajardo to change the plans for the center and library, to allow North Main Street to remain open.

Council received a letter from Guajardo on Nov. 16, stating he was proceeding with the redesign of the eastside of the proposed center. The letter also said there are water and gas lines running underneath the sidewalk, which Gallegos said was news to him. There is a meeting scheduled on Nov. 29 of the building steering committee, so they can present their proposal.

Guajardo also mentioned going out for bids, with all the changes and the approval being some time by Jan. 20, 2012.

Gallegos said he put the item on the agenda because, “I think that the council has made the decision, what we’re asking him to do and I’m glad that he’s moving forward on it. I still question the $10,000 that he had said it would cost to redesign that east-facing wall, because the council never directed him to design the design that he did– to go into the street. I think that $10,000 should be negotiable and I don’t know who instructed him to go into the street.”

City Manager Kathy Coronado later told the Pleasanton Express that she felt the date of Jan. 20 to go out for bids was an unrealistic one. She has spoken with Guajardo about the redesign and so far, explained Coronado, he said it has either been really plain looking or it looks like a shopping center. This is a heavy duty, longer process than most people realize, added Coronado.

Following this item, Gallegos discussed when the city can go out for bids on the community center and library project. He said he was hoping it would be sooner than Jan. 20 and wanted to get this moving forward.

Patsy Troell of PCCI reminded Mayor Powell and council that those plans were approved by them and the building committee. She said they all admitted they failed to double-check that elevation, but it was approved by council.

“I have to ask why we’re in such a hurry, when this council, or four members of it, took a vote that has delayed this. We could have been starting construction this month, according to the architect,” said Troell. “To say we’re disappointed is just not accurate. To say that those folks are circumventing the will of the people– I think is a fact and we’re very, very saddened by the action. I don’t understand their position. The will of the people will take this to a vote.”

Councilmember Garza then said he didn’t know who in the room told the architect to design the building with Main Street closed.

“The architect knows all the meetings he has had with anyone in this room, including the PCCI non-profit group, city staff, city council or any other person who claims to represent the city of Pleasanton on this project.”

Powell said he could answer these questions.

“There is no other answer except for this one right here. When we approved the plans, we did not realize that that was going to have to happen, until Mr. Metting reviewed the plans, about 1 1/2-2 months ago at this point,” Powell said.

That is when it was revealed and that is when the street closure issue came up, explained Powell. He said there was not another explanation. In regards to why council is in a rush now, he said, “It’s because we do have the money, so yes, we’re in a rush to complete it.”

Troell was about to speak, but Powell said they were going on to the next item.

“We’re getting into the same rut every time this has come up, so we’re going to move on to item #14,” said Powell.

Troell later told the Pleasanton Express that the point she wanted to make was: this is a public issue and it is fair to take it to a vote.

“My point is, if council knows we have a petition, why are they forcing money, the mechanical, architectural and engineering fees, to redo and rehire everybody? Yes, it is $10,000. What did you expect? If you are worried about the money, why not wait and see? Let the vote take place,” said Troell.

After the meeting, Garza told the Express that he felt it was not council that was delaying the project, but the citizen group.

At the meeting, Garza said he wanted to see the original idea and the time that it was presented to the architect by anyone in the room. He also requested each and every change ordered on the project and who approved it, from the day Guajardo was first hired.

“I want to know who claims to have the best interest of the city, or is just serving their personal ego. When I have seen the documents, I will have a clearer picture of the whole situation, because I really don’t know who started this ordeal about closing the street, because I don’t ever remember saying I wanted that street closed,” said Garza.

Powell replied again that council did not have any idea the street would have to be closed. It was Metting who brought it up. Gallegos responded that yes, they all looked at the plans and adopted them.

Said Gallegos, “It was the failure of the architect or the city staff or whomever knew that by voting on those plans would mean closing the street. If none of us caught it, if they knew about it at that time it should have been brought to our attention.”

Gallegos added that had council known about the street being closed, they probably would not have voted on those plans.

Said Powell, “Again, and this is the last time I will say this, the only way we realized the street would have to be closed is after we approved everything. This is when Metting started reviewing it.”

Then he asked Metting if he could elaborate on this.

Said Metting, “The plans had been drawn up and it was time to prepare the final documents, the construction documents off of the concept plans done by the architect. Looking at the concept plans he had drawn up, it became apparent that his proposal closed the street and had a plaza drawn in the plans.”

Metting mentioned this to Coronado and that document was brought to council’s attention. This was in August or early September, said Metting.

Powell then asked Troell if she could give Garza whatever PCCI has, as far as the process he went through. Troell said she did not have a problem with that. However, she has the same plans the city has.

Saenz said he has received several calls from people asking what a surveyor is doing on Main Street.

“I have approached the city manager and she said she didn’t know anything about it. I said OK, there’s an engineer or surveyor there. Who is going to pay for it? What’s going on? It seems like every time I ask, nobody knows and I don’t have answers to the public that are asking questions. There’s too much commotion going on. Still, something is going on with Main Street about people seeing a surveyor,” said Saenz.

Powell asked Metting to address this. Metting said he was not sure who Saenz was referring to as far as the surveyors out there.

“There may have been someone who was looking at it for the citizen group, but as far as the surveyor for the city, he has not quite finished all of the work,” said Metting.

Metting then noted how they needed data at the architect’s direction that is good and solid that has elevations. Cars in the parking lot and at the post office have been a little bit of a problem with getting the survey done. Powell said it may be the surveyor was in the street just to shoot the elevation for the existing buildings.

Gallegos said he did not think that was correct.

Samsel did not respond. Powell then said he was gong to end discussion on the item.

Resident Judy Havins then spoke before council on the items previously approved, relating to the construction of the proposed community center and library facilities. She shared a little history about her family to let the audience know why she was interested in the issue. She is married to Bill Havins, who is a CPA. Her daughters and sons-in-law either have businesses here, teach here, are on the school board and one is the mayor. She also has grandchildren who have either graduated from Pleasanton ISD or still attend PISD. She has been here since 1970.

“Pleasanton has always seemed to have an issue with getting things done,” said Havins. “We get things going and then we stir it. Then we mess it up.”

She said she did not think the street closure is a problem and that peers and egos have gotten in the way.

Most of those attending the meeting did stand in support. Havins said as councilmembers, they vote for everyone.

This was followed by a loud applause.

Councilmembers voted 6-1 to direct Coronado to transfer $500,000 from the general fund to the library/community center building fund, dedicated to the completion of the project as defined at the July 7, 2011 regular council meeting. Voting against was Saenz.

Councilmember Israel began the discussion by saying every time that council brings up the actual money that is in the budget (the project as they originally designated funding) they have been missing $500,000 because it sits in the general fund.

“I’m asking that when I see that piece of paper that lists the total funds available, I want to see $2,500,065 all on one sheet,” said Israel.

She said this could be accomplished by moving from the general fund $500,000 in surplus sales tax, that has already been designated. She asked Coronado for a quick comment on whether this would be an issue or not. Coronado answered not that she is aware of. Coronado also said this direction was probably good, since there will be a change of hands soon.

LISA LUNA is a Staff Writer of the Pleasanton Express. Contact her at 830-281- 2341 or lluna@pleasantonexpress.com 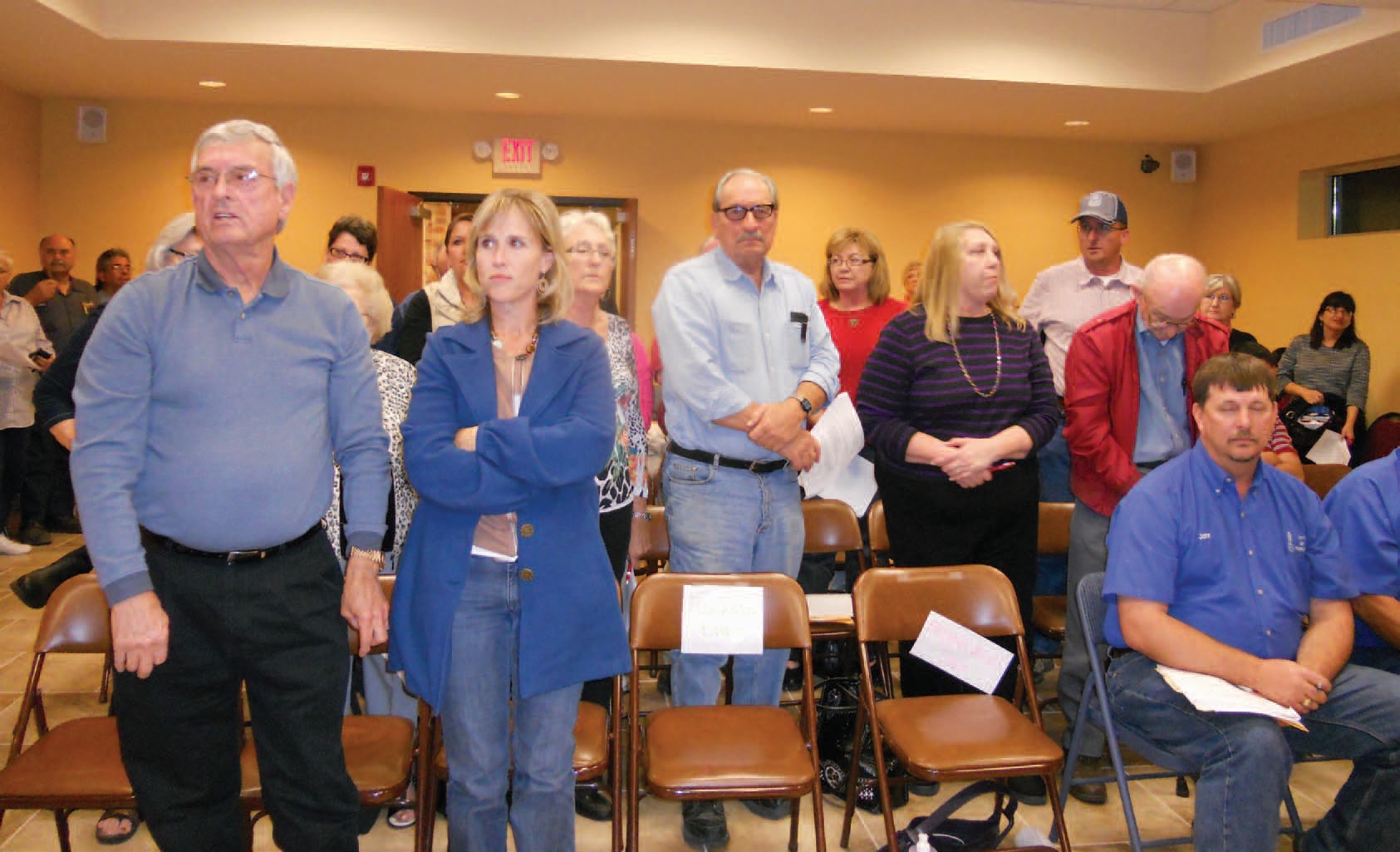 Those attending the Nov. 17 Pleasanton City Council meeting stood to show their support of approving the community center plans with the street closed.