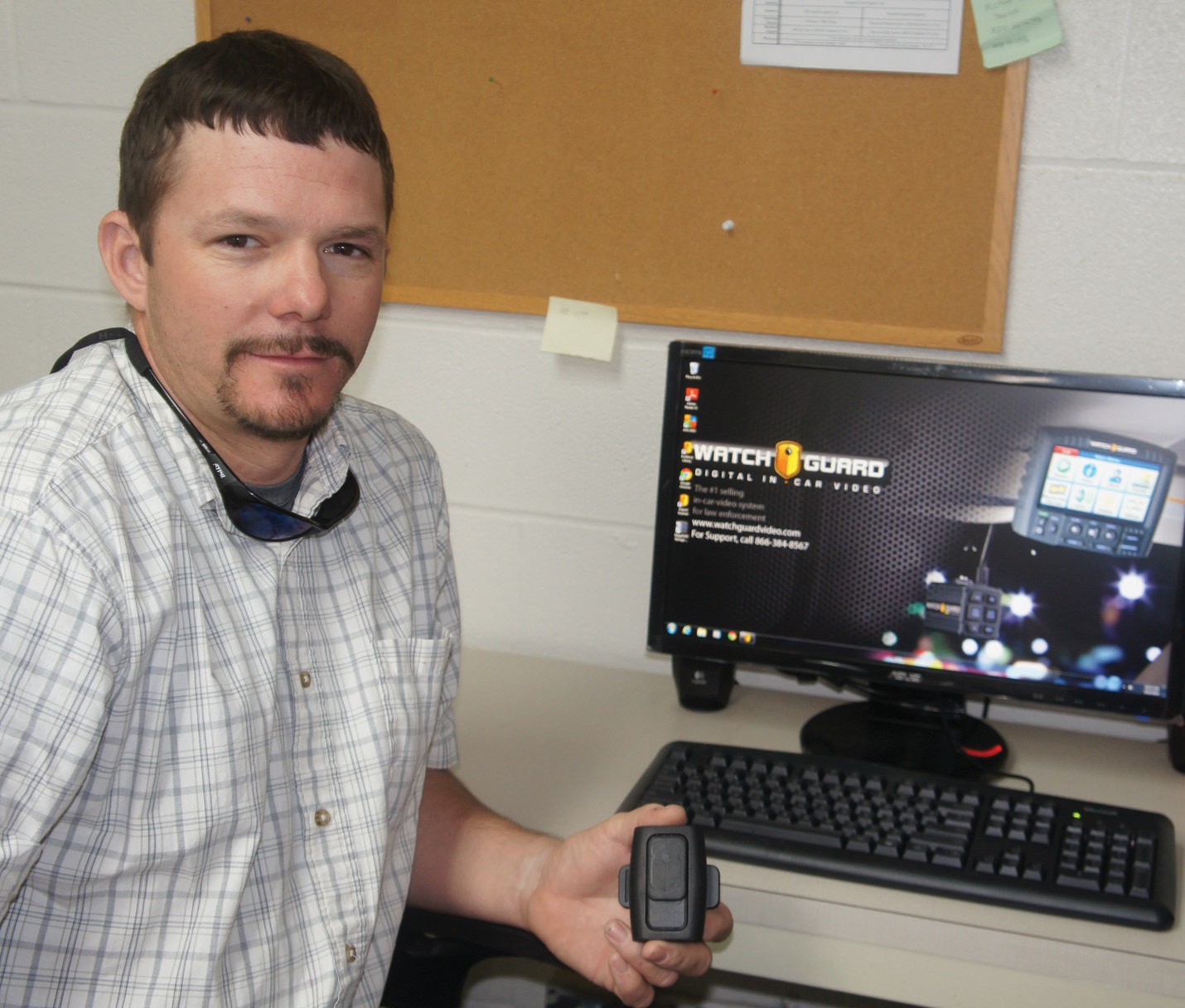 Bruce Hickman, City of Poteet Code Compliance Officer displays one of the body cameras used by the Poteet Police Department.

The Poteet Police Department recently upgraded to a high-tech in-car video system, along with body-cameras for all officers, said Poteet Police Chief Plutarco Castro. It is known as the 4RE system by Watchguard, with wireless upgrades. “It allows for downloads from the cars, directly to the station. Before, it had to be downloaded manually,” said Chief Castro. Bruce Hickman, Code Compliance Officer for the City of Poteet explained how the system works.

“We decided to go wireless with this system. That opens up a whole lot more with our evidence. With this program, the officers have to log into their cars and their cameras,” Hickman said.

If for some reason they forget to log in, such as in an emergency case, Hickman can go in the system and fix that later.

“We can add case numbers that will be tagged to the video itself. From that video, they can take still frame photos. We can then save it to the file, along with that video,” added Hickman. “If they take a picture with the camera, they can take the memory card out and when they download the videos they can access that and they can save the videos to that file.”

With this system, the officers each have log-in rights to their computers. Officers are able to log in to Hickman’s server with their own password and they can access it.

“They can watch their own videos, which increases the accuracy of their reports,” Hickman said.

The other advantage of this is that they do not have to wait for Hickman to come in and make a copy of the video, as he only comes in two days of the week.

“The way it is set up is really user-friendly, as far as adding or removing people and setting up the vehicles,” said Hickman. He added that configurations can be made to when the system records and why they record.

“When I go back to look for those videos, I can search for it by any particular officer- we have a list of current and former officers here. We can look for it by what car they were driving or by a specific date or category. They can label if it is a traffic accident, traffic stop, pedestrian stop and so on.” Hickman explained the system was just made available online on Sept. 24.

Watchguard is coming out with a new body-camera this month. However, Hickman said the city decided to wait until the Generation 2s come out next year.

The department started out with three body-cameras and now they have six. There is one on every officer for every shift. The body-cameras can be worn on the officer’s shirt.

It is a simple operation. Just slide it down to record. When you close it, it stops,” he said.

“The new ones that are coming out the beginning of next year… the bodycam will actually be the microphone for the car as well. So all those videos will be on one server, instead of two separate servers like we have now,” said Hickman.

Said Chief Castro, “It benefits all of us here, as far as the police officers, because it keeps us professional at all times.” Castro said he has seen a decline in the number of people calling in and complaining that they were mistreated or cursed out by an officer.

“When I tell them we have it on video and we can both see it and view it and then you can decide whether to continue with your complaint or not, most of the time they won’t continue. It has very good benefits to the program.”

Hickman said it is an advantage to have, as the body-cam video goes everywhere the officer goes. “A lot of people don’t even realize that we have been using body-cams for 6-8 months now,” said Hickman.

“The body camera is an extension of the camera inside the car, because the car camera can only see one angle. When the officer has that camera on, it is going to follow him everywhere he goes, including inside the house of the residents. Especially with domestic disturbances that we have, we can record everything that is going on,” Castro said. Hickman was also pleased that the department is also using the COPsync program.

“It is a program that all county departments have. It helps us relay information back and forth to each other. We can find each other faster in case of an emergency. The school system notifies the five closest officers if there is something going on at the school, so we can have a faster response.”

They have had COPsync up and running for about five months. They also use it to write reports and keep track of who they have had contact with.