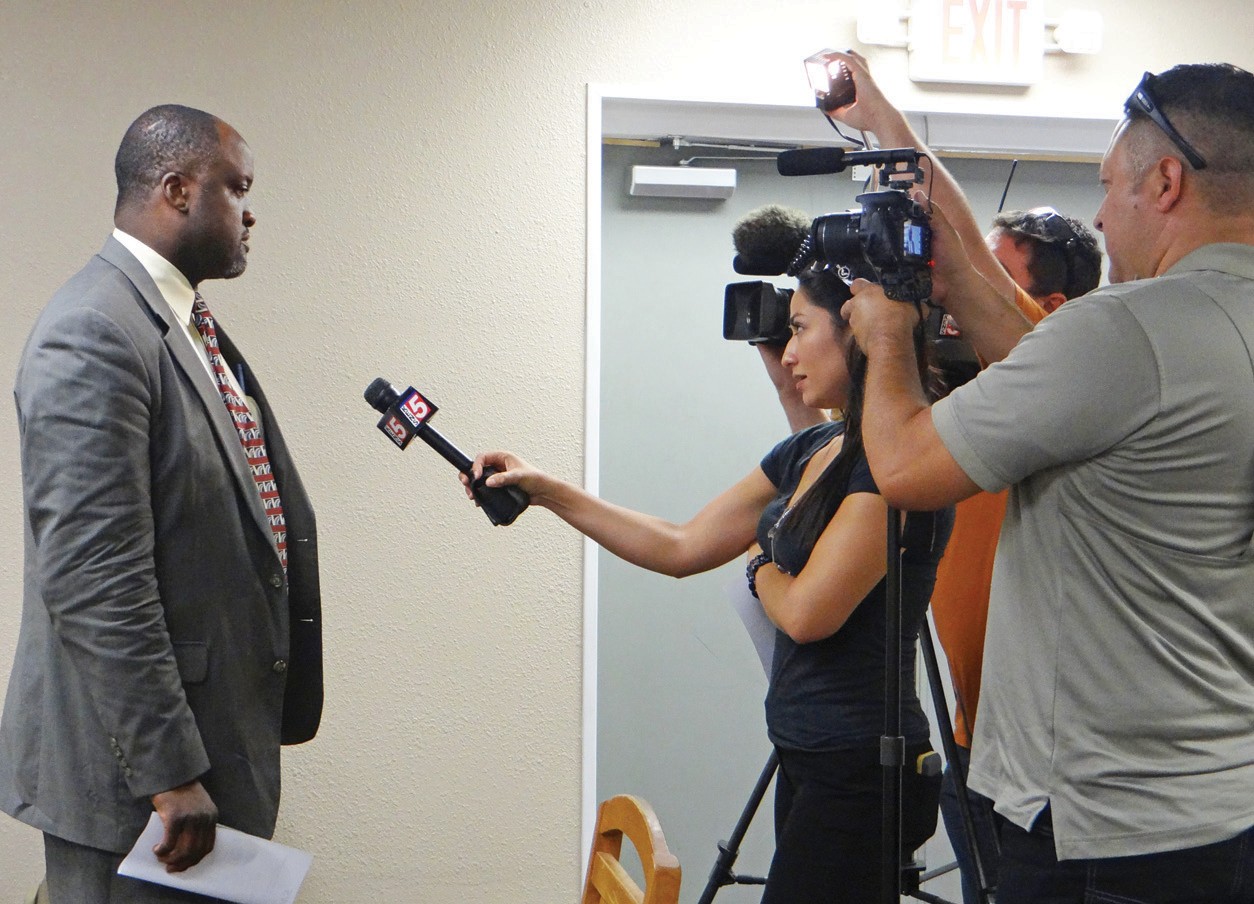 Poteet City Administrator Scott Moore addressed media outlets at an impromptu press conference on Tuesday discussing the decision to place Poteet Chief of Police Martin Chavez on administrative leave. When asked if the allegations that some tickets may have been ignored so recipients would be free of prosecution were merited, Moore said that if there is anything that is found will be brought to light and shared with the Council.

The Poteet City Council spent over an hour in executive session Monday night, trying to determine the fate of Police Chief Martin Chavez. Upon returning, Mayor Larry Cantu said that no action was taken during the meeting, as prompted by the City Attorney, and then asked if there were any motions. None were made and the meeting was immediately adjourned at 7:38 p.m.

On Tuesday, the City of Poteet released the following statement.

Chief of Police Martin Chavez was placed on administrative leave on June 27. City Administrator Scott Moore is conducting an internal investigation that stems from police department operations and management oversight issues that need to be completely analyzed and presented to the City Council for them to review and discuss in the near future.

At this time, the investigation is ongoing and no other city employees or police officers are on administrative leave. “As soon as the investigation is completed, I will provide the City Council with my recommendations to improve our internal controls and reestablish the checks and balance for the integrity of all city operations,” stated Scott Moore. “It’s important that the citizens of Poteet see that this administration is striving to maintain the community’s trust in the services that we provide on a daily basis and accountability is the way we will achieve this,” said Moore.

The City Council will be updated in the upcoming weeks regarding the status of the internal investigation.

Previous to the closed session, the council took care of the regular agenda business, including the approval of the minutes for two previous meetings. There was a brief discussion about appointing a representative for the Atascosa County Appraisal District Board. City Administrator Scott Moore advised that the choice would have to be made to replace or reappoint the representative by December and he wanted to give them time to think about this. No action was taken on this item.

Moore also gave the council a printed report on the delinquent tax rolls, some of the uncollected taxes going back to 1976. They will go with the new tax attorney that the county is using and they will provide a monthly report at first. Cate will complete the work for the year, as contracted.

Coordination of the members’ calendars is needed before they can plan budget workshops for the 2014 budget. These meetings will need to be held before the September deadline.

Council adopted an ordinance amending commercial garbage collection rates, which revised the rates charged inside and outside of city limits. This was done to catch those commercial entities who were not being charged for extra containers.

Denise Sanchez made a motion to approve a variance for Sandra Perez to move a 1999 mobile home within the city limits. Greg Groesbeck seconded and Sonny Estrada, Gerard Herrera and Vanessa Saylor also voted approval. The ordinance on the books does not allow any mobile home over 10 years old to be moved, but this one is already in the city limits and is just being moved a couple of blocks. Also, it is in very good condition and kept up well.

The game room located at 9550 Hwy. 16 has had a change in ownership and the new owner wants to put another one within the 500 feet allowed in the ordinance. After some discussion, it was decided to allow this variance, since the same person owns both properties.

No other business was conducted at the meeting.