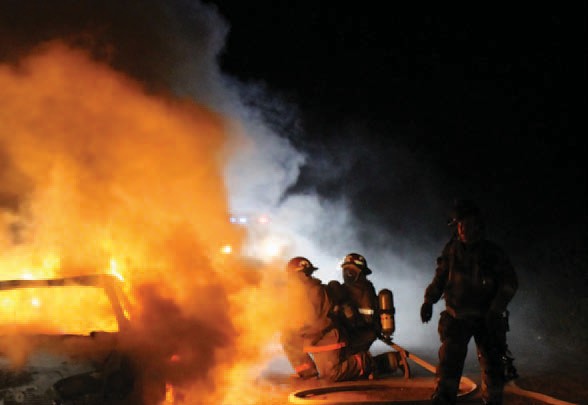 The Pleasanton Volunteer Fire Department responded to this vehicle fire of a Lexus that caught fire on Coughran Road, a little after 10 p.m. on Wednesday, June 13. The vehicle was a total loss, but there were no injuries.

After Pearson arrived in January and met with Chief Garris, he felt at that time that the hiring of part-time personnel was not advisable.

“He was in favor of that pursuit in the budget considerations last year but later found that it was not practical from the operational side and discord had been created within the departments on the volunteer side,” stated Pearson.

Pearson added he and the Chief have discussed the need to move toward fulltime positions within the fire department.

“We both agree that there is no intention for the volunteer effort to go away. Those individuals then and now remain an important part of the history of the City of Pleasanton. However, with the city growing at a rapid pace the need for full time considerations is necessary,” stated Pearson.

1. Setting up a command structure for recommendation to the city manager.

2. Developing job descriptions for each position.

3. Research other cities and their transitions from volunteer to full time and the incorporation of both efforts.

4. Providing better response time by being at the station whenever calls go out.

5. Act as the incident commander “on scene.”

6. Develop and decide on uniforms for personnel.

To prepare for the fulltime positions, the city will write a grant application for the Firefighter Safer Grant.

“We will ask for six positions. These positions will be funded for three years at the end of which the city will pick up the salary and benefits package. This would be a tremendous advantage for our city,” stated Pearson.

The city will also apply for two Firefighter Assistance Grants to hopefully acquire new bunker gear and a new rescue truck. There will be a five percent matching funds provision with these grants if rewarded to the city.

Pearson summarized his recommendations for programs in the Fire Department:

•Develop a command structure for future full time positions in the Fire Department.

•Research other cities and their transitions from volunteer to full time and the incorporation of both efforts.

•Provide better response times by having a full-time Chief on staff.

•Provide for an incident commander in the form of a Chief on staff.

His recommendations for Fire Department Personnel:

•Hire a full-time Chief to better serve the citizens and businesses of Pleasanton and begin the process of preparing for the possible hiring of full-time personnel.

•Apply for the Firefighter Assistance Grant to fund 40 new sets of bunker gear.

•Apply for the Firefighter Assistance Grant to fund a new rescue truck.