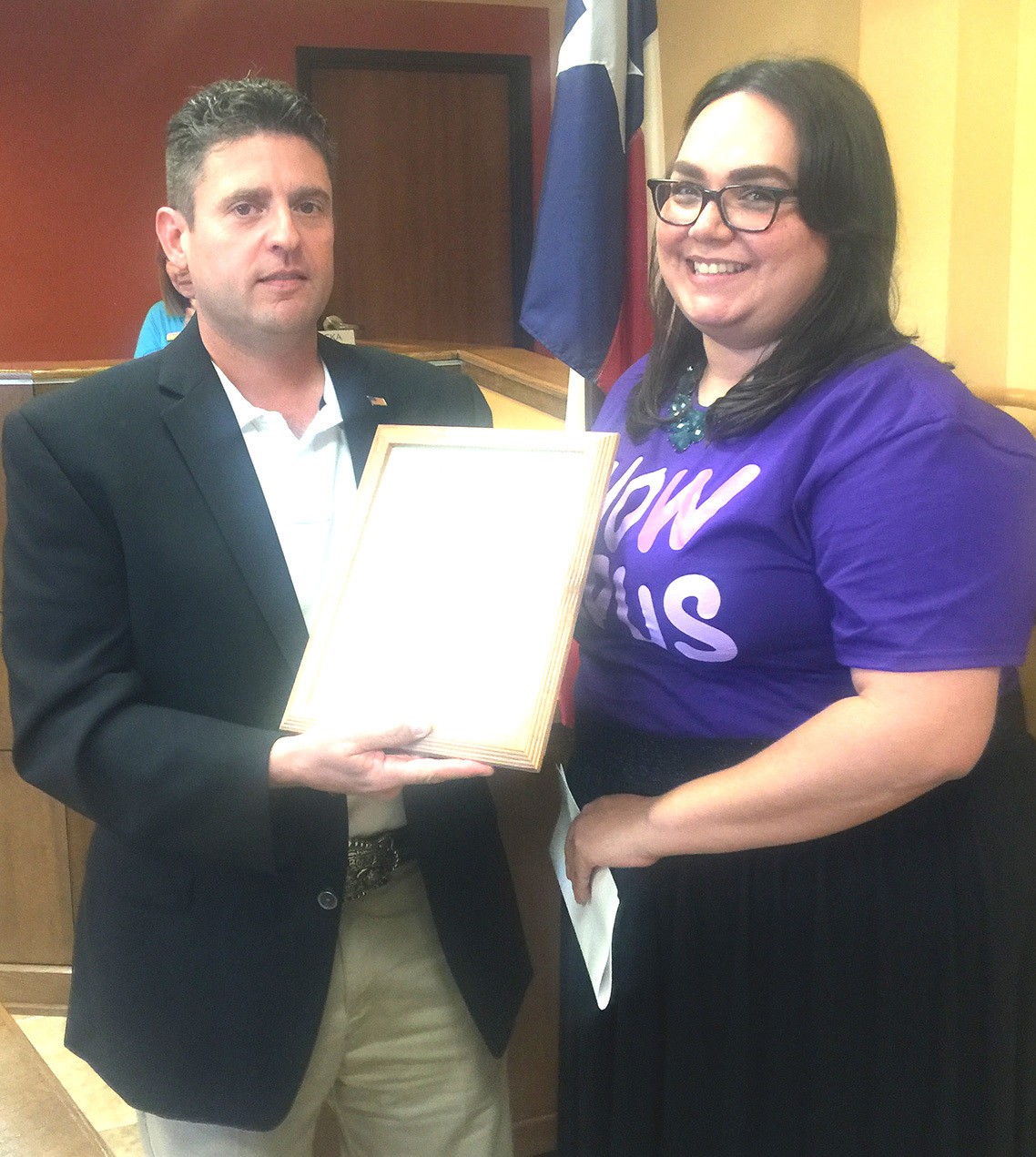 Pleasanton Mayor Clint Powell proclaims the month of May as Lupus Awareness month and May 20, 2016 as “Wear Purple Day” with South Central Texas’ Lone Star Lupus Field Services Director Angelica Garza at the May 5 meeting.

The minutes from the April 21, 2016 meeting were approved as were the items on the consent agenda.

Elementary School and a variance to Pleasanton’s Code of Ordinances Title XV: Land Usage, Chapter 150.01 Building Code; paragraph (K) (2) (b) to less than 10’ and not closer than 3’-3” from any property line.

A representative from Eagle Heights Development, a new apartment community on Airport Road, invited the council to their grand opening on June 23, 2016 at 3 p.m.

Bob Byrd wanted to reconfirm that the city is aware of the oak wilt that is an ongoing problem in town. He wonders if the city is able to assist with the problem. He also mentioned that he hopes the council has not forgotten about the skate park plans.

Dorothy Steelman has been the librarian for the last 11 months. She gave the library annual report. Number of registered users went from 7,700 to over 8,700. Internet users increased from 11,000 to over 13,000. Collections also went up. Circulation went up over 11,000 and library visits went up to over 15,000. Right now, they are having about 1,000 patrons per week.

City Manager Bruce Pearson reported that a letter is being sent to the TxDOT Aviation and to FAA in reference to the fire station being built at the airport. The FAA is asking for the amount of the offset of cost once the fire station is there. Monies should be saved since there would be a reduction of the police patrol and city staff who check on the airport. This should more than cover the rental of $300 per month – a nominal fee since the appraisal of the land could fetch rental income to $23,000 per year.

The Master Plan includes a Water Capital Improvement Program to install an automatic meter reading system. Some meters are 25-30 years old. The new meters are technology driven system that will enhance customer service to our rate payers.

A proclamation was then read by Mayor Powell recognizing the month of May as Lupus Awareness month and making May 20th “Put on Purple Day” with South Central Texas’ Lone Star Lupus Field Services Director Angelica Garza.

The second reading of Ordinance No. 16-1172 amending the Future Land Use Plan of the Pleasanton 2025 Master Plan for the 19.34 acre site being the Southwesterly remaining portion of a 67.427 acre parcel designated as Parcel Two and a portion of Parcel Three, being all of Lots 1 through 7, and a portion of Lot 8, Block 6 from Low Density Residential to

Institutional use was read and adopted.

The reading was done and adoption of Ordinance No. 16-1173 affecting participation of City employees in the Texas Municipal Retirement System granting the additional rights authorized by Section 854.202(g) of Title 8, Texas Government Code, as amended; and declaring an emergency was approved.

A presentation regarding Brush Country Animal Advocates was given by Chief Ronald Sanchez. The group has been helping the animal control officer by finding homes for over 125 stray animals. That number is growing, too. They help with vaccines, food, etc. He introduced Monica Rojas, Claire Quintanilla and Susie Swingle. Another member, Sharon Hatch, was at the dog pound giving vaccinations.

Saved 76 dogs, 62 cats, 17 community dogs in Pleasanton. Some are now living in the Seattle area.

They have spent over $2,000 of their own money to test, vaccinate, feed and spray for tick infestation. Not one dog has had to be put down since January of this year.

The Council then approved to hire Bruce Pearson as a consultant to the City of Pleasanton from June 4 to September 30, 2016 at a rate of $4,500 per month.

The Council also approved the salary for Interim City Manager Johnny Huizar set at $105, 000 per year.

The Council then went into executive session at 6:36 p.m. when they emerged they approved to accept the final report and invoice regarding the investigation relating to EEOC Charge No. 451- 2016-01290N discussed in session.

After reviewing the bills, the meeting was adjourned at 7:10 p.m.