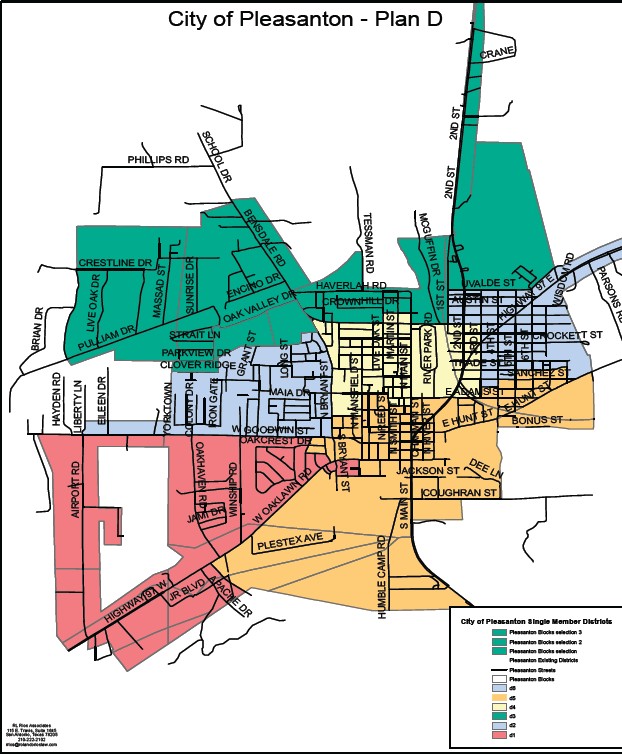 At a brief meeting on March 22, the city council adopted Plan D, resetting the boundaries of voting districts within the City of Pleasanton, as of the 2010 U.S. Census data.

The five members of the council present voted unanimously on the item. Not in attendance were Janet M. Jackson and Jeanne B. Israel.

1. Districts are of equal population size given the limitations imposed by the 14th Amendment of the United States Constitution and 42 USC Section 1983. No more than a 10 percent top to bottom deviation.

2. Districts must comply with Sections 2 and 5 of the Federal Voting Rights Act, 42 USC Section 1973, as amended, and the Texas State Equal Rights Provisions. Single member districts must be submitted to and approved by the United States Attorney General, Voting Section, Washington D.C. pursuant to federal regulations before election can be legally conducted.

3. Districts are comprised of compact and contiguous geographic areas given the limitations imposed by the non-compactness of the jurisdiction.

4. Other considerations include: a. identifiable geographic features for boundaries; b. integrity of political subdivisions and communities; c. protection of incumbency;

The City of Pleasanton wishes to comply with the federal and state laws protecting the citizens’ right to vote. It is the considered judgment of the Councilmembers that Plan D is in the best interest of the community;