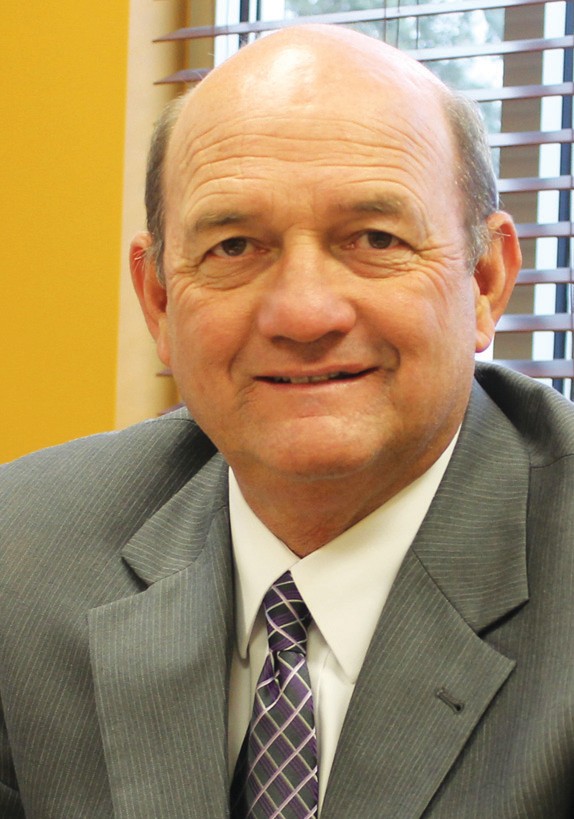 I sat down with Pleasanton City Manager, Bruce Pearson for an up-to-date review about progress in this city regarding projects and development.

With Fairfield Inn, that will increase the number of three-story hotels to four over the past couple of years. Already serving the community are three of the large hotels, namely Hampton Inn, Best Western Plus and Microtel Inn and Suites.

Pearson said, “Along that same corridor, Bakke Development Corporation out of San Antonio is building a commercial center just east of the Taco Bell.

“They have made announcements that Hibbet’s Sporting Goods along with Wing Stop, a nationally established chicken wing type restaurant that will be there. Additionally, an AT&T Mobility store, a rue21 and a General Nutrition Center (GNC).

“We see that development as something that will be very key. We do not have anything like that in the city right now that can provide shopping opportunities for our citizens. They must drive to the San Antonio area to do that kind of shopping. We feel like that’s going to provide an opportunity to stay right here in Pleasanton for a lot of those needs.”

When asked about Savannah Suites, the extended stay facility, Pearson said, “These developers are out of Georgia. It’s a family business. The lady that’s in charge of the business has been very hands-on with our community. She has been here for every concept meeting and is a friendly, professional business lady. Those are the type of folks we want in Pleasanton.

“We want business people who will be a great community partner.”

I asked Pearson about the new apartment complex by Greg DiCaro called Fountains at Bonita Creek.

I asked about a working plan for dredging and cleaning of the Atascosa River and Bonita Creek that’s on the agenda of city council.

Pearson said, “This project dates back to a 2003 report from the Army Corps of Engineers. The report told the city what we had to do to get the Atascosa River and Bonita Creek cleaned. With the length of the river through the city limits, the length of Bonita Creek, these types of projects cannot be accomplished in normal operations and maintenance budgets.

“The city council, about six years ago, issued the debt to do a number of projects and to clean the Atascosa River and Bonita Creek.

“Shortly after arriving in Pleasanton, several council members and a former council member brought to my attention that there had been money set aside to accomplish that project and see it through to an end as the money was set aside. After discovering what funds we had set aside, the question was how to approach this project at this time.”

Pearson mentioned that since there was some years between 2003 and 2012, that he and the city council were not about to put that project out to bids without an updated letter from the Corp of Engineers.

Pearson said, “We immediately made contact with the Corps of Engineers, I think, in the summer of 2012. Through various situations that took place, they couldn’t make it down here the two times we set dates to spend all day with them. Ultimately, the Corps representative was here in February of this year. We received his report in late April of ‘14. So now we have an updated report.

“Our city engineer designed a contract of specifications and plans to put the project out for bids. We were not happy with the first bidding process so we elected to receive bids again.And those bids have been received.

“The recommendation was made by the city engineer to the city council at our meeting on October 16. Austin Filters was the low bid. And, based on their past performance with helping the city close the old landfill, the city engineer recommended that they do the project.

“Right now we’re in that phase where they’re securing their performance bonds and insurance and all of the proper data that we need from them for us to sit down, have a preconstruction conference, and issue them a notice to proceed. But, essentially, that project is let right now.”

Pearson continued, “We’re going to be able to do everything we hoped we can do and that is from the northern reaches of the city limits which is considered the pecan orchard on the river – all the river will be cleaned, all woody plants cut. We’ll do some herbicide injection to the stumps that are left to keep them from sprouting again.

“Between Adams and Hunt the Atascosa River will be drained and dredged to reestablish the main channel. From Hunt we’ll proceed all the way to the end of the city limits, clearing woody plants. And then all the way up Bonita Creek slightly west of the H-E-B.

“We were dutiful to accomplish everything that the Council and Corps wanted us to do.

“But the focus when the debt was issued was on several other projects. There was the closing of the landfill first and foremost. There was another project that was really on the front burner, so those projects took several years, up through 2010.

“Shortly after that we were busy again and tried to get the Corps down here to write an updated letter.”

With the major clearing of Bonita Creek, drainage from that area will discharge quickly into the Atascosa River and substantially free up the flood plain area in the western Pleasanton city limits.

Pearson said, “The Bonita Creek drainage corridor project will absolutely benefit our citizens in general to discharge water at a much faster rate through Bonita Creek and out to the Atascosa River and down that river a lot better during heavy rains.”

Pearson added, “What we have going on regarding the housing side is exciting to say the least. We accepted 28 lots in Timberhill 2 – Phase 2 about four months ago. We accepted 68 lots in Phase 4 of Williamsburg. Homes are under construction in both of the new phases. That gives us somewhere in the neighborhood of about 90 lots or so. We’re right at the cusp of accepting Phase 2 of Bonita Vista which will total 48 lots. That will total somewhere in the neighborhood of 135 to 140 single family lots on the ground ready to build on, in this town and I would say that we never have had that many at once. We still have some lots left in Jamestown and some lots left to build on in Riata Ranch. So we have a number of single family lots in about five different subdivisions.

“With the building of the Fountains at Bonita Creek, a project over on Oakhaven, and to its west, townhomes and apartments and apartment complexes coming on Airport Road, we have between 600 and 700 multi-family units that we anticipate will be constructed or finished somewhere in the next 12 to 36 months.

“We’ve reviewed plans on the Fountain at Bonita Creek as well as Oakhaven Apartments & Townhomes on Oakhaven. We’ve reviewed initial plans of one apartment complex on Airport Road and we’re expecting plans any day on the other ones.

“We have had some preliminary discussions with other developers about building other multi-family apartments. We’ve had discussions and I have a meeting in a week with another developer who is actually a land owner already. They have between 25 and 35 acres in Pleasanton. I’ve been told through intermediaries about a gentlemen who is interested in developing the land and I have scheduled a meeting with him.”

Pearson added, “Granzin’s is building their full-service meat market on Airport Road that will not be a drop off only for game, anymore. They’re under construction now and we think that will offer something to all the citizens in Atascosa County who wish to visit an old fashioned meat market.

“H-E-B, obviously has opened up the eastern portion which is around 20,000 feet of their store expansion. I had visited it twice recently and invite our citizens to visit it. It is very, very unique for Pleasanton and very unusual. With the set-up in their fresh food, produce and delicatessen, they are offering items in that section of the store that I’ve not seen in other H-E-B stores. They’ve really done their market research.

“How can we describe hometown any better than H-E-B. They are a great community partner. On every anniversary of 9-1-1, they sponsor lunch for all public safety personnel. They had a great lunch for our firemen and policemen at H-E-B not to long ago. Anytime the mayor or the council calls on H-E-B, asking for assistance or support, they’re there to help.Much like Wal-Mart and other big block stores, the expansion of the H-E-B is just a tremendous, tremendous thing for our city. And I might say, we’re beginning to see what the store is going to look like on the outside. It is very attractive.”

Pearson continued, “We have a number of projects on West Oaklawn. Village Inn is under construction and they’re progressing at a very fast rate. Southtrust Bank, across from Village Inn is progressing to completion. I am very excited about seeing those two buildings open.

“One of the very first things I heard from the existing citizens, when I arrived in Pleasanton, is, can you figure out a way to get a breakfast restaurant inour city. Village Inn is that traditional breakfast restaurant and we’re very excited about that. Some of our employees are looking forward to tasting a piece of one of their pies that they are well known for.

“Bush’s Chicken, also on West Oaklawn, is under rapid construction. We would hope that we would see Bush’s open in the next 60 to 90 days, if not sooner. Bush’s is another one of these businesses that will be a great community partner. I have first hand knowledge of Bush’s because it’s a hometown business in Waco, where I grew up. And I’ve known the owner, Keith Bush and his family for a number of years. It’s not unusual for them to come into a community and make a donation to the fire department and police department. It’s a homegrown business much like many of our entrepreneurs that are Pleasanton natives. He grew the business from the time he was 18 years old. He was the original owner of another chicken business – sold it out and then started Bush’s Chicken later. Keith Bush and his family are fine, spiritually-led people. I’m happy to have them here in our city.

“Another new business just opened here in Pleasanton is called Service Supply. It’s in a facility owned by Jim Wheeler who’s leasing it to this firm that’s able to supply an instant inventory of parts for plumbers and tradesmen. It’s a very spacious facility right down to steel-toed boots, coats and blue jeans. They will be offering a wide variety of not only supplies, but tools for the trades. It’s at 1601 Comanche Lane atJRBlvd.,southofWest Oaklawn.”

Pearson concluded, “In summation, the City Council should receive all of the credit for the positive developments and activities we are experiencing at this time. Through their policies and in particular their leadership, we have been fortunate to enjoy the fruits of our efforts. Our staff has been another outstanding component of this success. I am very lucky to work with professionals at all levels.”