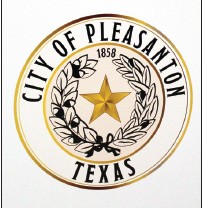 City council has made some progress on branding Pleasanton Texas at the January 16, 2014 meeting, but some items remain contentious.

Pleasanton City Council unanimously adopted three branding objectives: 1) broaden the appeal of Pleasanton’s rich cowboy legacy to people from Texas metropolitan areas who have of nonwestern or non-Texan heritage, 2) to positively impact the economics and future growth of Pleasanton, Texas notwithstanding the Eagle Ford Shale 3) to ensure Pleasanton, Texas as a destination for fun and work to corporate/ business enterprises and families

Pleasanton City Council then voted unanimously to accept this as the Official City Seal, which will be used which was hired to help Pleasanton develop their brand, suggested that the seal be simple so that it would be easy to copy.

City Council then discuss the logotype, i.e. the shape and arrangement of the letters on the City’s brand. City Manager Bruce Pearson said he and his staff have heard a lot of public comments, and “The most prevalent thing we hear is that that logotype should be Eagle Green.” Pearson suggested that, if the logotype and its arrangement were adopted, that a limited copyright could be written up by the city attorney that would allow the City of Pleasanton to give way the logotype to whoever wants to use it, so long as the arrangement of the letters doesn’t change and the logotype should be Eagle green unless it would not be applicable. The limited copyright they propose would include room for creativity, such as replacing the city seal with other symbols. City Council unanimously voted to adopt the logotype per Pearson’s suggestions, which means that the color of the words “Pleasanton” and “Texas” will be Eagle green unless design issues prevent that color choice.

City Council postponed decisions on the official brand’s design and the slogan. At the November 6, 2013 meeting, City Council allowed the public to weigh in on the proposed slogan “The good ol’ days just keep on coming”; most present at that meeting did not approve of the slogan.