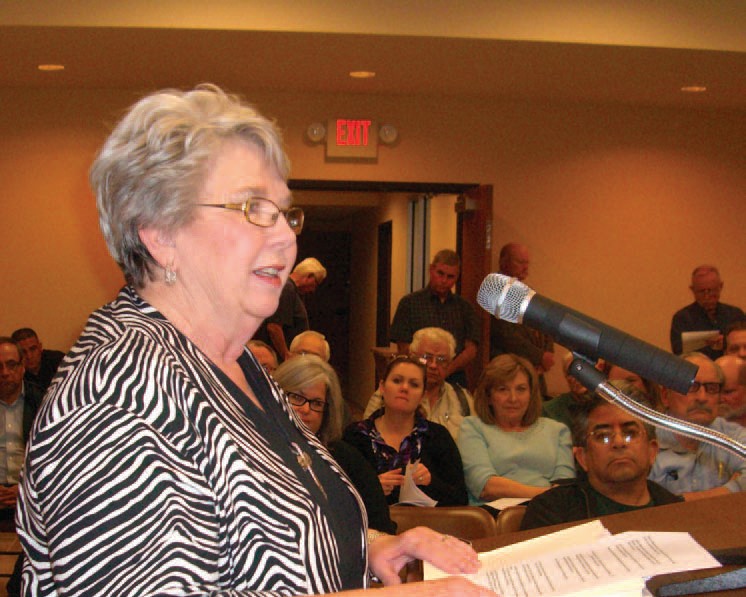 Judy Havins informs council, “Since Nov. 28, 2011, a group of qualified voters have collected 728 signatures in support of this petition.”

On Jan. 5, Judy Havins presented the Pleasanton City Council with the voter initiative petition and formally filed it with City Secretary Cindy Urrabazo. A total of 728 signatures were collected and this high number, “reflects obvious interest of the citizens of Pleasanton, in you revisiting your decision on the design of the community center and library and whether to partially close Main Street, immediately in front of those buildings,” said Havins.

The petition’s purpose, explained Havins, is to have two voter initiatives submitted to a vote of the qualified voters of Pleasanton, at the next regularly scheduled city election. This is pursuant to the city’s home-rule charter, Article 13, Section 1.

She also asked council to take into consideration the Dec. 5 letter from the Texas Department of Transportation. The letter recommends the removal of the traffic light on Main St. and Goodwin.

“We sincerely hope that the council will decide to take a vote as to whether to approve the design presented in July and to partially close the street. This action would preclude the need to wait for the election in May and would thereby save costs and delay,” added Havins.

She was followed by applause after pleading, “We trust, oh how we trust, that you sincerely, you sincerely consider this petition and will act in accordance with the voice of the people.”

Councilman Abraham Saenz (Dist. 2) said he had something pertaining to the petitions. At that point, Mayor Clinton J. Powell asked City Attorney Robert Maldonado if council could have any comments and discussions on filing. Powell added he did not have a chance to talk to Maldonado before the meeting.

Maldonado responded that all the agenda item allowed for that evening was the presentation and filing.

“I think to engage in any discussion beyond this point,” said Maldonado, “would be in addition to what the notice that was provided to the public states. Without knowing what Councilman Saenz was going to say, the agenda item does not call for discussion.”

Gallegos then asked Maldonado about going into executive session. Maldonado said he needed to know under what section of the government code it would be. Gallegos said he was going to ask him about some of the intiatives, but that he would call him the following day.

“I have several questions, but if we can’t discuss it, I’ll just call you tomorrow,” said Gallegos.

Maldonado said that the charter contemplates a very precise procedure on something like this.

“This is the first step and then it has to run its course,” said Maldonado.

“They’re asking to vote on an ordinance and I would like your legal opinion on that ordinance,” said Gallegos.

It would be difficult for the city to draft an ordinance. It could be done, noted Maldonado, but it would have to meet the approval of those who submitted the petition.

“That’s my question. They already drafted an ordinance, but if we can’t discuss it, then I’d rather not. I’ll just call you at home tomorrow,” said Gallegos.

“The city secretary obviously has to take steps to ensure it meets the requiRements of the charter,” said Maldonado.

Powell suggested it might help the process if Maldonado explained that to them. Then Gallegos commented that Maldonado said they could not discuss it, so he did not know why they were discussing it.

Maldonado explained that since Havins was filing it with City Secretary Urrabazo this evening, it –was the “triggering date.” Then Urrabazo has five days in which to present the petition to council. She also has to certify that the petition requirements under the city charter have been met.

“She’s got a job on her hands in the next several days. She has to present a petition to council, with her recommendation as to whether it fulfills the requirements of the charter. At that point, as Havins indicated, council when presented with a certified, verified petition and draft ordinance, has to take the position at that point as to whether you will vote that ordinance into effect,” added Maldonado.

He said that if council chooses not to do so, a special election needs to be called at the next election day.

Outgoing City Manager Kathy Coronado received a plaque in recognition of her 28 years of service to the City of Pleasanton. Mayor Powell made the presentation.

Resident Kristian Talamantez spoke during Citizen’s Comments about the influx of pit bulls and the possible dangers they bring. She said she used to jog around the Pleasanton Intermediate Campus very early in the morning until she encountered a stray pit bull. After that, she chose another route.

“The next morning I was encountered by a loose pit bull and a loose boxer,” said Talamantez.

The other option closest to her house is a major highway, so Talamantez decided to stay indoors on her treadmill.

“Because of the known dangers of that breed, I ask that you consider some extra steps to ensure the safety of runners, bike riders and the children of our community,” said Talamantez.

Options that she listed included:

She also cited some statistics and characteristics of pit bulls. One of them is that they have a strong chase instinct, even when the victim shows no signs of aggression.

“My husband had to pick me up behind someone’s car one day. I’m very fearful and I really worry about the children in our neighborhood,” said Talamantez.

Her children received bikes for Christmas, but Talamantez said they are no longer allowed to ride them in their own neighborhood.

Pit bulls also possess agility, stamina and strength, said Talamantez. They also have a predisposition to aggression which makes them uniquely dangerous, even to their own owners. Forensic medical studies show that the injuries found in pit bull bite victims have only been found in one other place, said Talamantez, and that is on shark victims.

Roxana Newton of Accion Texas Business Center invited everyone to a free seminar on Jan. 17, 9 a.m. to 1 p.m. It will take place from 9 a.m.-1 p.m. at Pleasanton City Hall.

Accion is a non-profit group that offers business support. The seminar will provide insight to business owners on how to market their business to government agencies.

The class is important for any business seeking to work with private and public entities. A representative from the Procurement Technical Assistance Center (PTAC) will cover certifications, vendor registration, U.S. Small Business Administration and Hub Zone set asides and how to find contracting opportunities over the Internet. Visit: www.accionbizcenter.org to register. The seminar is a partnership between ACCION and the City of Pleasanton.

Councilmembers voted unanimously to approve the proposed plans for street improvements in the 1100 block of Trade Street, following receipt of a check from Castle Systems Inc. in the amount of $4,210.

The replat of the Shree Kuber Baba Subdivision was approved unanimously. This is for the Best Western and only a name change is needed. There are no other changes.

The advertising for bids for the electronic voting system was approved unanimously. This was previously approved, said City Secretary Urrabazo, but they needed to go out for bids because of the cost. 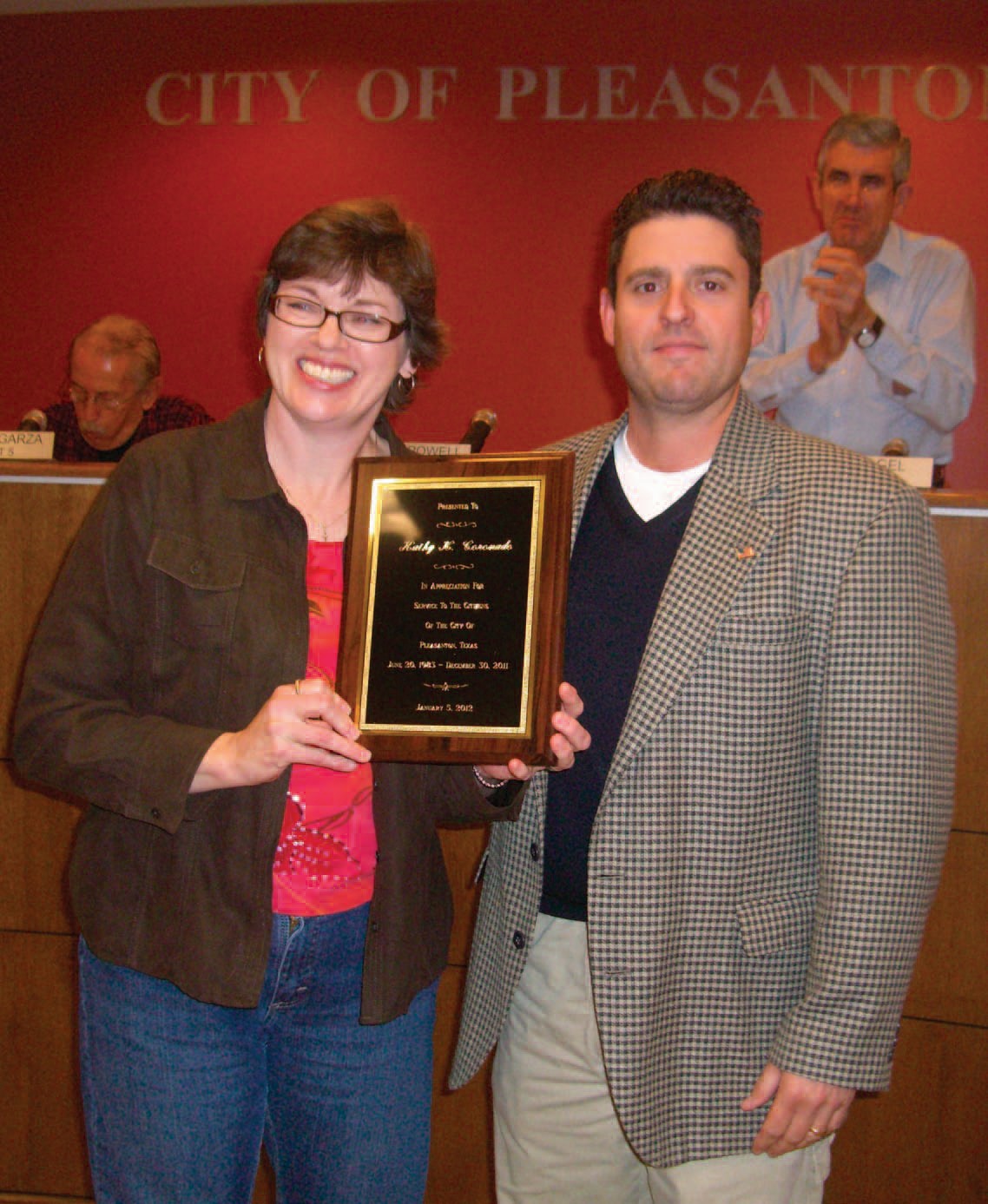 Pleasanton Mayor Clinton J. Powell presents a plaque to outgoing Pleasanton City Manager Kathy Coronado in honor of her 28 years of service to the City of Pleasanton.