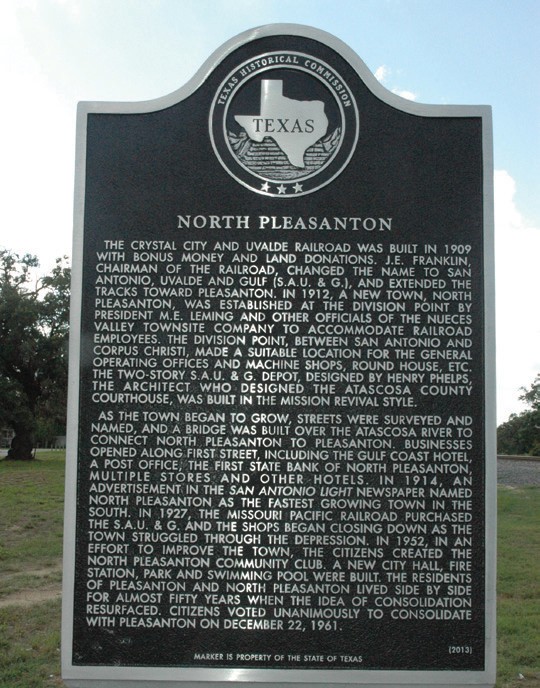 The much needed rain that fell Saturday morning, September 27, may have dampened the plans to unveil the new markers, but folks gathered despite the weather under a tent and umbrellas to attend the ceremony to dedicate the newest Texas Historial Markers in our county.

Hosted by the Atascosa County Historical Commission, the ceremony took place near the the railroad tracks and where the San Antonio, Uvalde and Gulf (SAU&G ) Railroad depot stood. Two markers, one for the “Sausage” Railroad as it was called and one for North Pleasanton.

Mayor Clint Powell addressed the group and Vice-Chairman Barbara Westbrook explained the purpose of the markers.

A brief history was read by Norman Porter, Sr. Both inscriptions on the markers for the railroad and township were read by J. D. Kvapil and Lester Reichert, members of the local commission. Refreshments of home baked cookies were enjoyed.

The markers were installed by the local office of the Texas Department of Transportation just east of the railroad tracks on Commerce Street (Spur 242) and First Street.

Special thanks were noted to TxDOT, Hurley Funeral Home for the tent, Pleasanton ISD, City of Pleasanton, Public Works and Police Department and to Albert Gomez for the use of his property to hold the function.

The Crystal City and Uvalde Railroad was built in 1909 with bonus money and land donations. J. E. Franklin, Chairman of the Railroad, changed the name to San Antonio, Uvalde and Gulf (SAU&G), and extended the tracks toward Pleasanton. In 1912, a new town, North Pleasanton, was established at the division point by President M. E. Leming and other officials of the Nueces Valley Townsite Company to accommodate railroad employees. The division point, between San Antonio and Corpus Christi, made a suitable location for the general operating offices and machine shops, round house, etc. The two-story SAU&G depot, designed by Henry Phelps, the architect who designed the Atascosa County Courthouse, was built in the Mission Revival style. As the town began to grow, streets were surveyed and named, and a bridge was built over the Atascosa River to connect North Pleasanton to Pleasanton. Businesses opened along First Street, including the Gulf Coast Hotel, a post office, the First State Bank of North Pleasanton, multiple stores and other hotels. In 1914, an advertisement in the San Antonio Light newspaper named North Pleasanton as the fastest growing town in the South. In 1927, the Missouri Pacific Railroad purchased the SAU&G and the shops began closing down as the town struggled through the Depression. In 1952, in an effort to improve the town, the citizens created the North Pleasanton Community Club. A new city hall, fire station, park and swimming pool were built. The residents of Pleasanton and North Pleasanton lived side by side for almost fifty years when the idea of consolidation resurfaced. Citizens voted unanimously to consolidate with Pleasanton on December 22, 1961.

The San Antonio, Uvalde and Gulf railroad had its beginning as a short line railroad and began in 1909 under the original name of the Crystal City and Uvalde (CC&U) Railroad. With the advent of drilling and discovery of deep Artesian water wells in the western portion of the Brush Country, irrigation farming of fruits and vegetables became very profitable which increased the need for better transportation to ship goods to distant markets. Land promoters soon saw the value of the CC&U Railroad, offering “bonuses” to bring the railroad to new areas of the Brush Country. In 1912, it expanded into North Pleasanton, created by railroad officials to include a round house, railroad shops and a two-story depot. The train from San Antonio made its first trip to Pleasanton on September 16, 1912. By the time the tracks reached Pleasanton, the railroad became the San Antonio, Uvalde and Gulf railroad (SAU&G), or ‘The Sausage.” In January 1913, a bridge over the Atascosa River was completed and train service continued to Campbellton and, eventually, to the coast. In the early 1920s, the SAU&G was purchased by the New Orleans, Texas and Mexico Railroad for the Missouri Pacific Railroad. In 1982, Missouri Pacific merged into the Union Pacific Railroad. The railroad was a major factor in transforming the hot, dry, brush and prickly pear area into the vast farming and ranching lands of South Texas. The old SAU&G railroad tracks from San Antonio to Corpus Christi are the last remaining tracks between the two cities. Union Pacific crews still refer to this stretch of tracks as “The Sausage.” 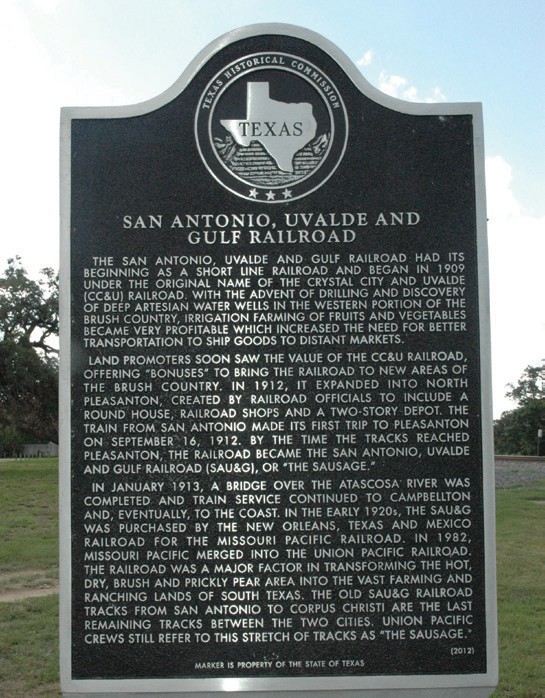 The newly installed Texas Historical Markers commemorating the SAU&G Railroad and North Pleasanton may be seen at the corner of First Street and Spur 242 (Commerce Street) east of the bridge and tracks.