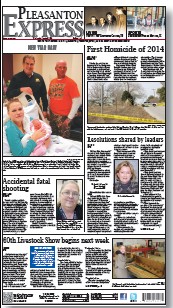 Time – measured by minutes, hours, days, weeks and years – goes by faster these days it seems.

Here is the year in review – stories from the front pages of the Pleasanton Express.

The first of the year also brought the first homicide, too. Rick Estrada was allegedly gunned down in Pleasanton.

The Jourdanton Municipal Complex had their open house and dedicated two Texas Historical markers in honor of Jourdan Campbell – the man who Jourdanton was named after.

After almost 20 years of planning, plus over a year of construction, the Pleasanton Civic Center and Public Library are completed.

Princess was Naomi Jo Ybanez and Prince was Patrick Gonzales.

Pleasanton Chamber of Commerce honored civic leaders, too in March.

H-E-B began its expansion on their store, too.

Jimmy Garza won Grand Champion for his super sweet Chandler strawberries at the 2014 Strawberry Festival contest. The berries sold for $14,000.

Atascosa County Deputy Stephen Wilson was elected as the Atascosa County Law Enforcement Officer Association’s Officer of the Year at their annual banquet.

Tragedy hit the county with three residents being murdered in unrelated settings. Lindsey Wadkins, Timothy Garcia Jr. and Daniel Coronado were all killed within days of each other.

A 414 Cessna twin engine plane crashed Monday outside the PleasantonMunicipal Airport. No injuries were reported of the six passengers on board.

Two people, John Bryan Finch and Naomi Delgado were both named suspects and arrested in the murder of Lindsey Wadkins.

Another man, Daniel Coronado, Sr. was murdered three weeks after his son was found murdered.

The Pleasanton Riverpark playground began its transition to repair and replace.

Randy Mangum was selected as the 2014 Working Cowbooy of the Year at the Young Farmer’s Open Rodeo. Inducted into the South Texas Hall of Fame were C.S. “Pete” Mangum (posthumously) and Margarito F. Guevara.

The Pleasanton Express advertising manager for the past 31 years, Mary Gallegos, retired.

Historical markers were unveiled for SAU&G railroad and North Pleasanton.

Three fatalities in October occurred. Joseph Anthony (Joe) Montgomery, 30, died at the scene of a crash at the intersection of State Hwy. 97 E. and Houston Street on October 4. And Juan Gomez, 22, of Christine and Joel Gonzalez, 24, also of Christine, both lost their lives after a head on collision on October 5.

A memorial service was held for the fallen officers of the 15th anniversary of the ambush that took the lives of Atascosa Deputies Thomas Monse, Mark Stephenson and State Trooper Terry Miller.

Mark Tullos and Mike Ramsey receive flags, flown over Camp Buehring, Kuwait during LTC Retired U. S. Army Veronica R. Hernandez’ tour in 2009. She awarded them for their committment to service to the community.

Pleasanton resident Carlos Chapa, missing since January 13, 2014, was part of a FBI investigation after a criminal complaint was filed against Ruben Reyes, a former Texas Mexican- Mafia member, was arrested for the alleged murders of Chapa and two other men.

Congressman Henry Cuellar (D-TX28), presented a check of over $3 million from the USDA to the City of Poteet to be used for water facility improvements. 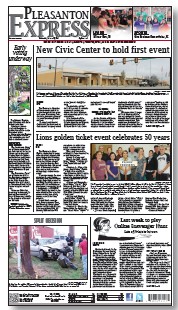 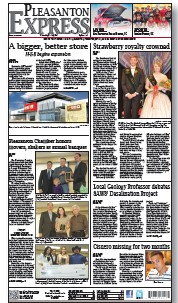 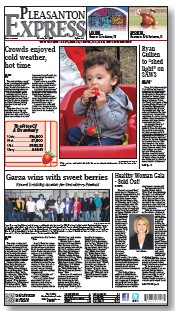 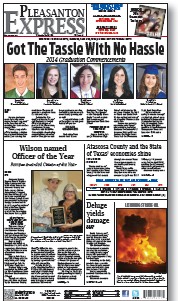 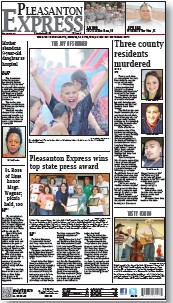 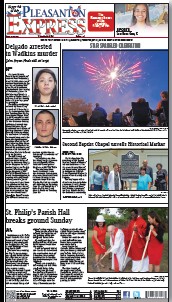 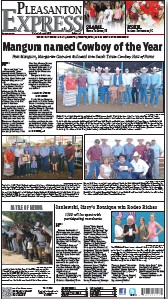 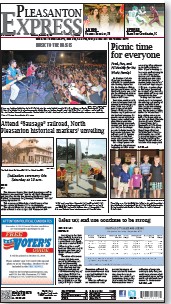 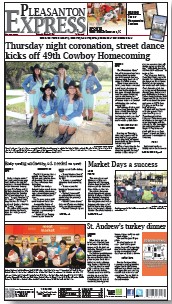 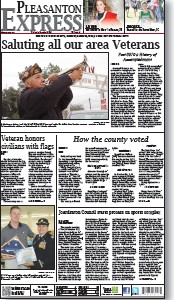 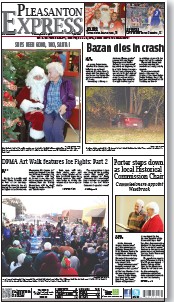