A two-year investigation has resulted in the indictments of 29 people and 86 criminal charges relating to an organized crime ring with connections in Atascosa County.

“A long-term, collaborative investigation was conducted between the Department of Public Safety led by Colonel Steve McCraw and the 81st Judicial District Attorney’s office,” said the 81st Judicial District Attorney René Peña at a news conference held Friday, April 29 at the Atascosa County Courthouse. “As it stands, several counties including but not limited to Bexar County, Atascosa County, Travis County and Wilson County were involved.”

The Grand Jury in Atascosa County returned the indictments on Thursday, April 28 which included engaging in organized criminal activity with underlying offenses of human trafficking, human smuggling, sexual assault, theft of motor vehicles and money laundering. The massive sweep took place on April 28 where 23 individuals were arrested four of who were from Atascosa County. In the raid, 46 vehicles, money, weapons, cell phones, bank record ledgers and other items were confiscated.

In arresting the individuals from Atascosa County a stash house was discovered which was alleged to have been used to house illegal immigrants who had been smuggled.

The extensive investigation was conducted between the 81st Judicial District Attorney’s office led by DA Peña and the Department of Public Safety led by Colonel Steve McCraw and included assistance from the Atascosa County Sheriff’s Office led by Sheriff David Soward, the Atascosa County DPS led by Sgt. Bobby Bratten and agencies from Bexar County, Travis County and Wilson County.

DA Peña said, “I want to recognize U. S. Marshals for their assistance in the apprehension of those individuals that were arrested yesterday – along with the Atascosa County Sheriff David Soward, and Wilson County Sheriff Joe Tackitt. And let me introduce who I think is very important to the state of Texas and that is Department of Public Safety, and its leadership is here today.”

Executive Director of DPS, Col. McCraw said that this operation was one of those model cases where different segments of law enforcement worked together on the situation at hand that had impacted South Texas counties. “In all the counties involved and all the jurisdictions involved, people are safer today as a result of it,” said McCraw.

“All across the country, it has an impact on life,” said McCraw. “As long as there is that demand for forced labor, and for commercialized sex there will be a serious problem that has to be curtailed.” McCraw said that the lines between human trafficking and human smuggling get blurry. He did state that the estimates for human smuggling are around 250 individuals per month.

DA Peña said the main goal of this type of criminal operation is profit. He said criminals will exploit people if they are able to do so when the demand is so great. “In 2009, I recognized that criminal organizations such as cartels, prison gangs, street gangs, were staging in rural south Texas and the border,“ said DA Peña. “The concern for me was that in their model, they were going to take control of one community at a time until they controlled neighborhoods.”

The 81st District Attorney’s Office as part of their on-going initiative is asking the community to join the fight against human trafficking by learning about the “red flags” that are potential signs of human trafficking. For more information about this under-reported and life-threatening crime through trainings or presentations, please call 830-393-2200. For trafficking concerns within the 81st Judicial District, please call your local law enforcement office or D.A. Investigator Kevin Ficke at 830-391-7482. 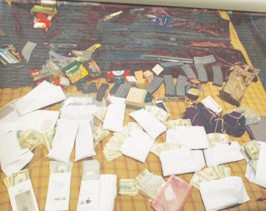 A portion of the seized property taken during the human trafficking raid.