Little League sign knocks it out of the park; goes viral reaching millions 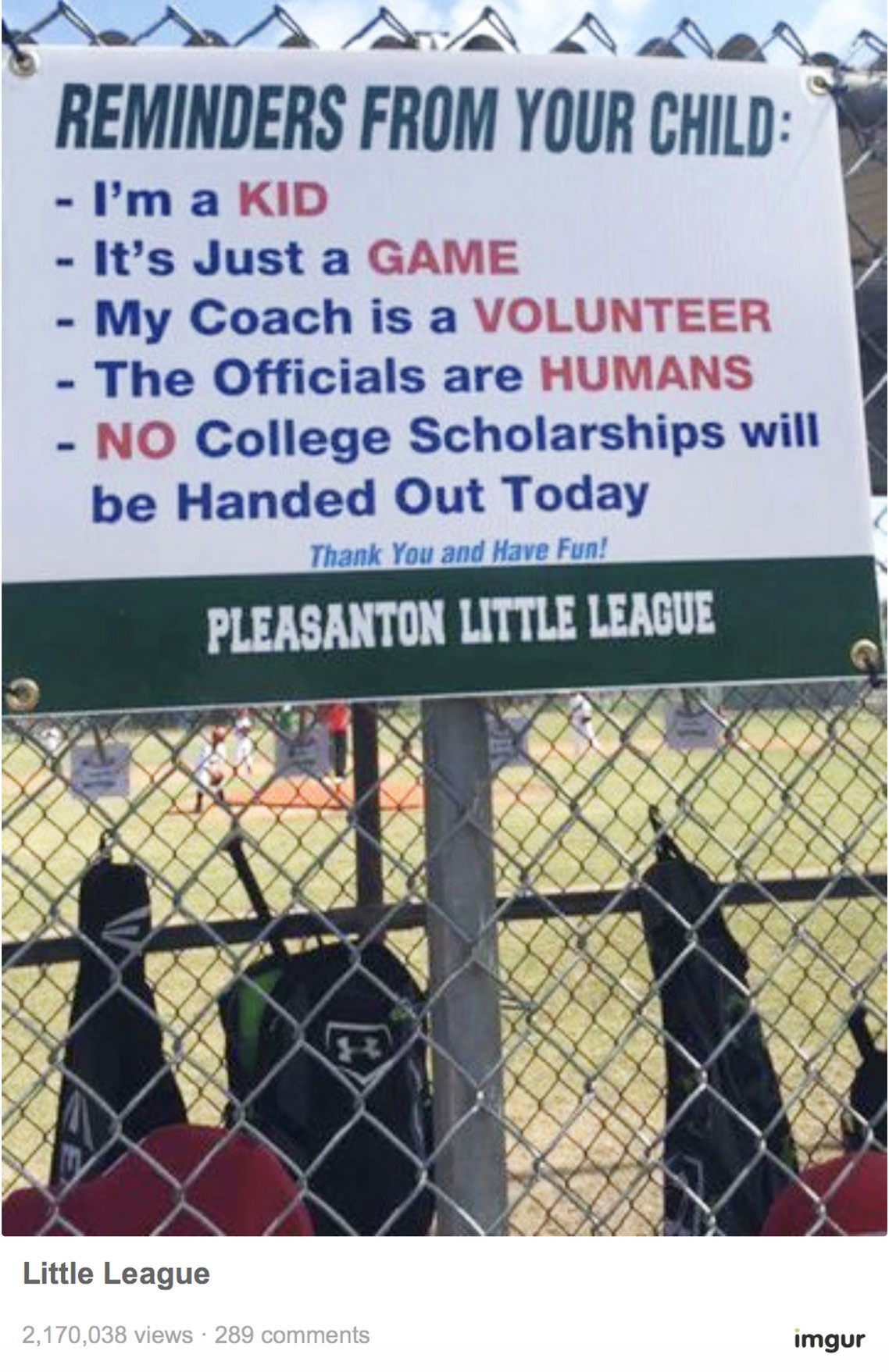 The 2016 Pleasanton Little League board members had no idea what a “home run” they would hit when they decided on posting a friendly reminder sign at the baseball fields. The sign is titled “Reminders from Your Child”:

• My coach is a volunteer

• The officials are human

• No college scholarships will be handed out today

The sign ends with the note “thank you and have fun.” The message perfectly fits into the 2016 Pleasanton Little League motto decided on by the board, “For the Love of the Game.” The board members did not create the sign but saw a similar one and thought it sent the right message to set the tone for a great Little League season. They printed up 10 and hung them throughout the fields.

The Pleasanton Little League sign hit the big leagues going viral just days after it was first shared on facebook. The message obviously resonated as one share led to another until it reached four of the largest social media and news websites on the internet – Reddit, Mashable, Imgur and the Huffington Post making the photo reach viral status. On Monday morning a story about the sign was featured on NBC-TV’s Today show broadcast and then on today.com. The story aired on Fox network in Atlanta and syndicated radio stations KLOVE and KISS. BuzzFeed, a social news and entertainment company which delivers to millions the top daily viral web content interviewed Jenny Wiggins, Pleasanton Little League Publicity Manager, Tuesday morning.

It is hard to determine how many people have actually been exposed to the Pleasanton Little League sign but one post showed 2.5 million views and the Today show alone has 4.8 million viewers.

The Pleasanton Little League board said that we want more than anything for the children in our community to be able to come out to the ballpark, play some baseball or softball and have fun. They said that with any sports these days there are overzealous fans and it ceases being fun for the players when a parent or adult yells and screams at an umpire from the stands. The board stated that their intention with this sign was to remind everyone why we are here and that is for the KIDS and to instill a love for the game.

Wiggins said that the reaction to the sign has been amazing and quite honestly unbelievable. She said board members never thought in a million years that it would get this much attention, but are so happy that it is. “It’s nice to see something this positive get so much attention! We wanted to reach out to our small town, but it is so exciting that it is reaching places all over the country!”

Wiggins says that what Little League players want to hear the most is “I love watching you play” after their games. “Make it enjoyable, let your kids be coachable and learn fundamental skills that can carry them throughout their life time,” she said.