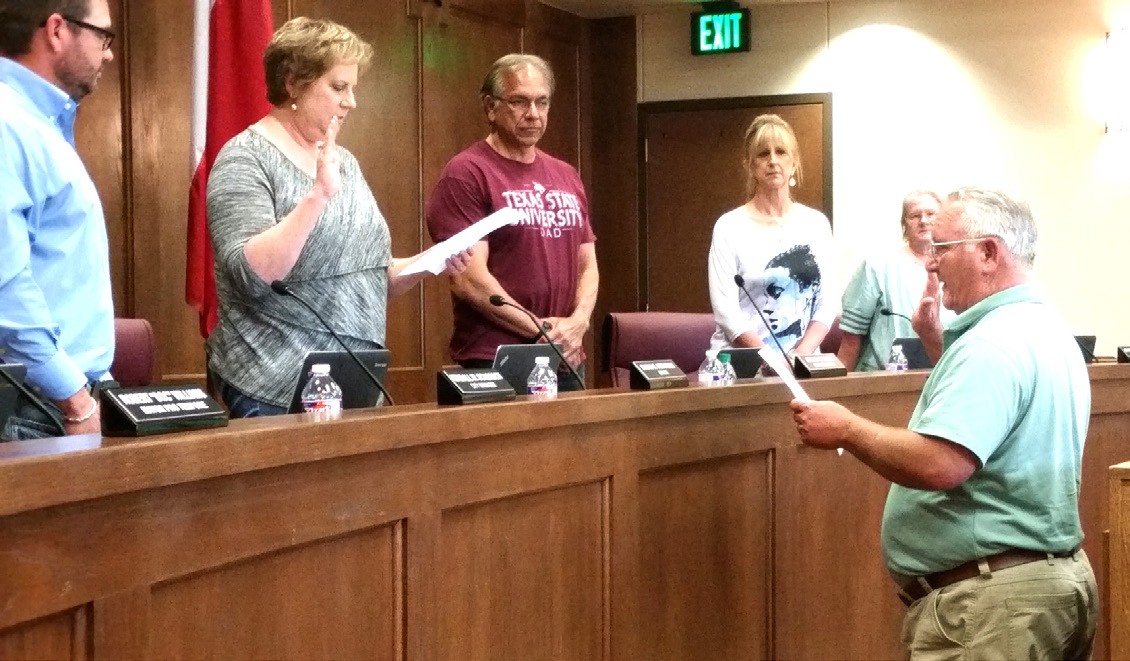 The City of Jourdanton Board of Adjustment meeting was called to order at 6:00 p.m. on May 16. On the agenda was the request for variances to the zoning ordinance for the installation of a manufactured home on property located at 1906 “A” Waltom. However, due to the fact that the legal description of the lot was posted incorrectly, the item was tabled until a later date.

A Public Hearing was opened at 6:21 p.m. to consider an application for special use permit for the property located at 1004 Marion Avenue. Joshua and Jessica Gonzales were seeking the permit to allow a manufactured home on the property. Patsy J. Elizabeth Tymrak- Daughtrey commented on the proposal by saying that the couple did not own the property and needed a landlord lease for their protection.

The second special use permit requested for 308 Main Street by Robert Ortiz was to place a manufactured home on the property. Norma Ortiz spoke to the council and said that the property would not be worth building a home on it because of the lack of resale value. She confirmed that the neighbors had no problem with a mobile home going in at that location. With no other comments, the Public Hearing was adjourned at 6:31 p.m.

The regular meeting of the Jourdanton City Council was called to order immediately after; all members were present: Robert “Doc” Williams, Raul Roy Morales, Karen Pesek, Johnetta Goetzel and Mayor Susan Netardus. The first item of business was the approval of the Consent Agenda, which includes the minutes from the last meeting and the payment of the bills. Williams moved to approve as presented, Goetzel seconded. Motion passed unanimously.

David Prasifka addressed the council under citizen’s comments. His first concern was the growth of weeds at 515 Beech St. He also put in a work order for the south side of Main Street, near the American Legion, due to the high weeds. Finally, he reminded everyone that the BBQ and Chili Cookoff was to be held this weekend, Friday through Sunday.

Daughtrey spoke next, complaining about the bulk trash that is out all over town. She began discussing Lewis Lem and wanting to know if he had resigned the Planning and Zoning Commission and other offices that might conflict with him serving on the council. She accused him of spending city money on Civil War uniforms that have only been on display at the library. Several other things were brought up regarding the time he spent on the council previously. Daughtrey added that Chester Gonzales was a good council person and had received the next amount of votes at election time and he should be appointed to the council, not Lem.

Lem got up after that, saying he hadn’t planned on doing so, but he would not be threatened in a public forum. He answered Daughtrey’s accusation regarding the uniforms by saying those were purchased for an event that was to bring visitors and money into the town. He concluded by saying that no well-mannered gentleman or lady should speak the way Daughtrey did.

The mayor moved up some agenda items for consideration. The first was the acceptance of the resignation of Lem as a member of the Planning and Zoning Committee. Pesek asked who would replace him as chair and she was told that the council could appoint someone. Lem’s resignation was accepted, reluctantly and unanimously.

The council adjourned into executive session at 6:48 p.m. to consider the receipt of a donation of land, appointee to fill the seat vacated by Kendall Schorsch and finally the evaluation, discipline or dismissal of a public officer, Wade Middleton.

Upon returning at 7:39 p.m., the council voted on and passed a resolution to authorize the negotiation and execution of documents to accept the donation of land. Lewis Lem was appointed as the replacement on the council and sworn in immediately. He said that in the end, it must be all about business and the good of the community and the council must work as a unit. No action was taken regarding Middleton.

James Alfaro from Alamo Signs addressed the council regarding a partial digital sign that Dr. McFarland wants to put at his office, using the existing poles. He will also be putting a new sign on his building. Goetzel moved to approve the request; Pesek seconded. Motion passed unanimously.

Both special use permits were approved unanimously for 1004 Marion Avenue and 308 Main Street.

City Manager Kendall Schorsch informed the council of some change orders that had come in on the sports complex building, due to drainage issues. There would have to be a reappropriation of monies, but the money would be used for this better purpose. No action was required. As far as the rest of the construction, there will be a water tie-in, which will eliminate the lift station behind the nursing home. The work is almost completed on the bath house and concession stands.

Deborah Jarvis, representing the local Relay of Life, asked for a waiver of fees to use the city park on October 1, from 9:00 a.m. set up until 2:00 a.m. finish. They hope to have more teams than last year and already have six teams signed up. Motion to approve the waiver passed unanimously.

Netardus reminded everyone of the Volunteer Fire Department BBQ & Chili Cookoff this weekend. There will be a signing of Hearts and Hounds by author Barbara Dornak Christian from 8:00 to 12:00 on Saturday at the Jourdanton Community Library. Williams said that there would be a Flag Day Ceremony on June 14. Schorsch mentioned that it was Police Week and they have put blue filters on the lights at City Hall. The Thin Blue Line Campaign is on Facebook for those interested. Finally, bulky trash pickup will be from May 23 through June 3.