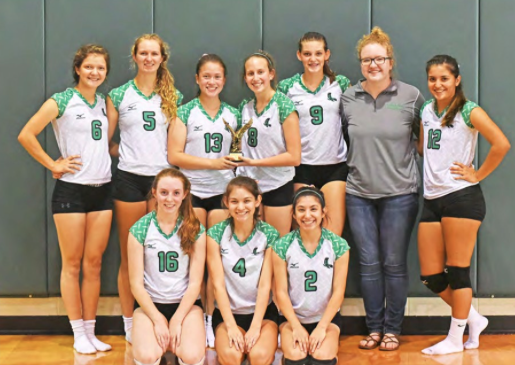 Pleasanton made sure to have a good showing in its home volleyball tournament Friday and Saturday.

In fact, the Lady Eagles had two teams walk away with trophies.

Pleasanton topped Universal City Randolph 25-18, 25-17 on Saturday to finish in third place. The win capped a 5-1 tournament for the Lady Eagles, who improved to 6-2 on the season.

“I think this year we’re going to do a lot better because we’re more experienced,” outside hitter Courtney Ridge said. “These past couple days, we’re doing a lot better than we did at the beginning of last year. I’m excited to play with this group of girls my senior year.”

Pleasanton also competed with a junior varsity team that took the consolation championship over district foe Beeville, its second tournament win over the Lady Trojans. Many of the team members will suit up for varsity this season.

“I was really happy with the way that we played, even though we haven’t been playing as a team the whole season and we’re not really used to each other,” senior Loryn Hardy said of the JV group. “We really came together and we pushed.”

Ridge and Hardy each earned all-tournament honors for the Lady Eagles.

“I was really excited [to get all-tournament],” Hardy said. “I haven’t really played setter a lot, but I was really proud of myself for helping the team.”

The Lady Eagles made quick work of the Lady Trojans in their early morning matchup Saturday, winning 25-10, 25-6. Pleasanton will open the District 30-4A slate on the road at Beeville on Sept. 22.

The Lady Eagles suffered their only loss of the tournament in the semifinals against FEAST, the Family Educators Alliance of South Texas.

The Patriots capitalized on a slow start by Pleasanton to win 25-19, 25-19 and advance to the final.

“I think it was our passing that killed us most,” Ridge said of the loss to FEAST. “We just got in a hole and took a while to dig out of it. We just have to get ahead more in the beginning and not let that come back and get us.”

The Lady Eagles JV placed third in its pool ahead of Beeville. The Patriots and San Antonio St. Anthony topped Pleasanton in pool play Friday.

St. Anthony went on to take a five-set thriller over FEAST for the tournament championship. The Lady Jackets had not lost a set until the championship.

The Lady Eagles will play St. Anthony in a regular match at home Aug. 29.