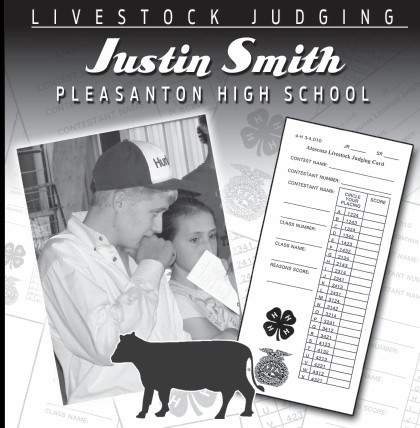 Name: Justin Smith
Age: 16
Grade, school: Jr., Pleasanton High School
Years active in the ACLS: Shown 8 years, since 3rd
grade. Shown steers, pigs and lambs. Favorite to show
steers.
Did you place this year? Won Grand Champion last
year, this Year Reserve Champion.
How many years have you participated in the Livestock Judging at ACLS? Since 3rd grade
Favorite to judge: Hogs, should be steers, but its hogs
because I always do better with hogs
Qualities in a lamb. You don’t want a whole lot of fat,
you want them lean muscled, and you also want a lot of
expression out of top and hind quarter, and when ever
you get in front of them opened up in the front. Also
whenever you get behind them you want them to be like
an upside down apple be bigger and work its way down
and be big boned and also be able to track whenever it
walks and things like that. Have extension out of the
front end, a long body, deep body.
What are qualities you look for in a champion steer?
A grand champion steer would have more fat, marbling.
When there is fat the marbling is in the muscle. That’s
what offers a better steak, like what you get when you go
to like Ruth Chris, one of the high dollar places. Steaks
that you don’t have the fat on the outside but you have
marbling on the inside that adds its own flavor. You also
want a deep body, long body with expression out of its
top and hind quarter. You want to make sure it’s structurally correct and level top and extended out of the
front end.
What would make you a good judge at the Atascosa
County Livestock Show? I think I would think a little
too much. I would need to stay simple. I think I could
judge alright if I did.