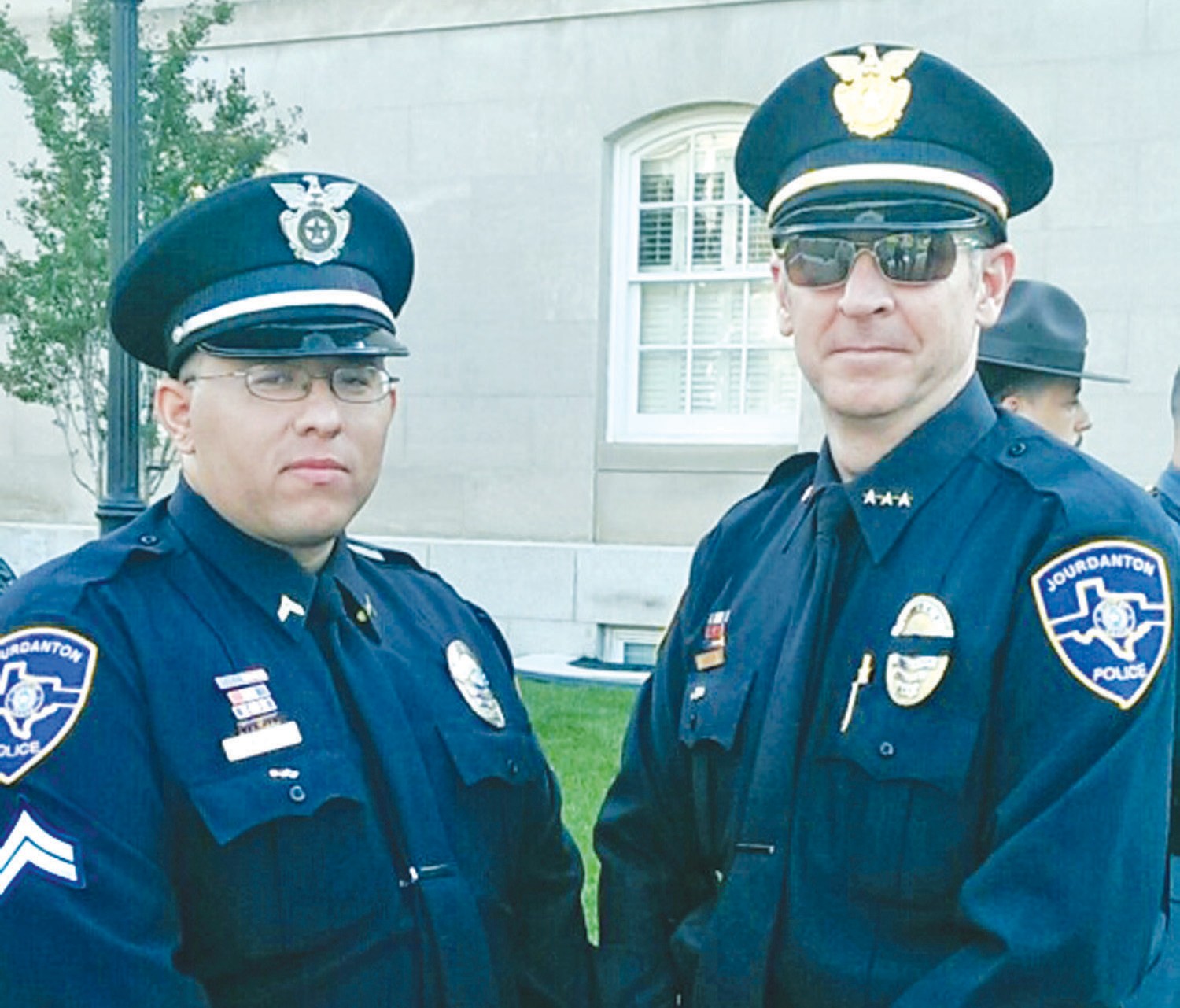 Jourdanton Police Chief Eric Kaiser and Corporal Santos Gonzales were in the nation’s capital to attend the United by Light event during National Police Week.

“We are really honored to be picked as part of the Honor Guard. We expect it to be a pretty moving experience,” said Jourdanton Police Chief Eric Kaiser.

Kaiser and Jourdanton Police Patrol Corporal Santos Gonzales traveled to Washington, D.C. to take part in the 26th annual Candlelight Ceremony, on May 13. During this formal dedication, a roll call of the fallen officers is announced and their names are unveiled on the National Law Enforcement Officers Memorial.

Residents in Atascosa County were given the opportunity to view a live webcast of the Washington, D.C. event, at the Jourdanton Police Department. The event came about after Chief Kaiser spoke to some officers who were at last year’s event. The officers were so touched by the experience.

“They told me I had to take part in it sometime in my career,” said Kaiser.

He then contacted the proper authorities.

“I told him we are a small department, but we were interested in doing this. So the Jourdanton Police Department was picked to participate in some of the activities,” Kaiser said.

After they received noticed that the JPD would be participating in the vigil, Kaiser heard about the live webcast and the United By Light campaign. He thought it would be a great opportunity for the public to get exposed to such an event and the brand new facility would be a great venue.

“Some people have never heard of National Police Week. It is a really huge event, one of the busiest weeks in Washington, D.C. We are one of the few small departments participating,” added Kaiser.

They served with officers from Austin, San Antonio and a few other Texas agencies.

Kaiser has been with the JPD for 12 years and Jourdanton Police Chief since 2009, while Gonzales has served with the department for about six years.

•Twelve color guard teams to stand at the front of the Memorial for the survivor bus arrival.

•Honor cordon along the Reflecting Pool for the Survivor arrival.

•Personnel to form a backdrop for the stage, during the Ceremony.

•Two-person teams to stand vigil, in ten-minute intervals with the Candle, from the time the National Colors are retired until midnight.

Kaiser and Gonzales will also be taking part in other National Police Week activities. On Wednesday, May 14, they will take part in The Standing Watch for the Fallen Ceremony. This ceremony includes a color guard, all state flags held by honor guard personnel from their respective states and various departmental flags. Following the conclusion of the ceremony until midnight, honor guard teams will stand vigil at the center medallion of the Memorial with a ceremonial wreath. At midnight “Taps” will be played, as the Memorial’s flags will be lowered to half-staff.

Then on Thursday, May 15, Kaiser and Gonzales will participate in the National Peace Officer Memorial Day Service, at the U.S. Capitol Building.

Following the conclusion of the National Peace Officers Memorial Day Service on the West Front Lawn of the U.S. Capitol building, the National Memorial Wreath will be transported to the memorial for a brief wreath-laying ceremony. Afterwards, honor guard teams will stand vigil with the wreath until midnight. At midnight “Taps” will be played, as the memorial’s flags will be raised.