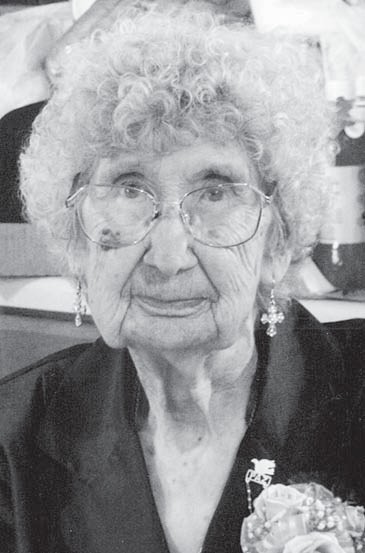 Josefa Herrera Torres, born August 9, 1914, passed away Saturday, June 29, 2013 in Poteet. She is preceded in death by her husband Jose Torres, her son Juan Torres and daughter-in-law, Belia G. Torres.

Josefa had the opportunity to travel with her youngest son Juan (deceased) to California, Nevada, Mexico, Hawaii and Rome, Italy during the 1970’s. She was a sports fan to the end. At the Aggie football homecoming game 2012, she was honored as the oldest Poteet Aggie fan. She enjoyed watching pro football games, especially the Dallas Cowboys. Josefa also attended the flag football games to watch her great-grandson play. During basketball season, she was a Spurs fan.

Josefa was a member of St. Philip Benizi Catholic Church and will be dearly missed by all .

Anyone wishing to leave condolences for the family may do so at www.hurleyfuneralhome.com.