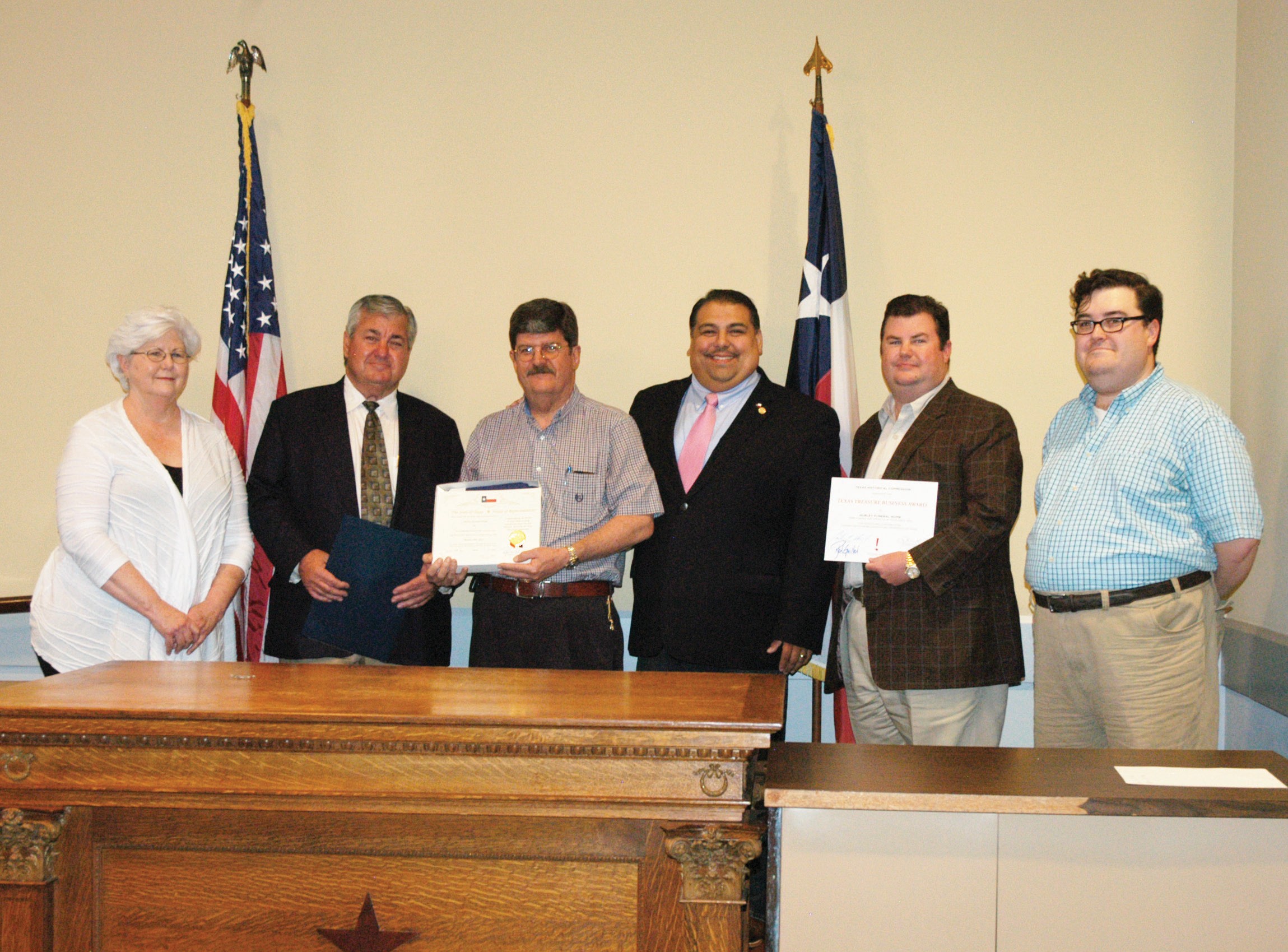 Atascosa County Judge Bob Hurley (a cousin to the family) read the narrative written by Barbara Westbrook Atascosa County Historical Commission Chairman, which helped the business to attain the designation. Nominated by by the local commission and Representative Guillen, the business received a formal certificate, an emblem to display on their business. Representative Guillen also presented the family with a flag that had been flown over the Capitol earlier that day.

According to the website, the Texas Treasure Business Award Program recognizes the accomplishments of Texas businesses that have provided employment opportunities and support to the state’s economy for at least 50 years. Created in 2005 by Senate Bill 920, authored by Sen. Leticia Van de Putte of San Antonio and sponsored by Rep. Charles “Doc” Anderson of Waco, the program pays tribute to the state’s well-established businesses and their exceptional historical contributions toward the state’s economic growth and prosperity.

Businesses can be nominated for this award by any elected state official or a business representative and must meet the following criteria:

•Have been in continuous for-profit operation in Texas for at least 50 years.

•Continue to operate the same or a very similar type of business as it did at least 50 years ago.

•Have a continuous record of employment for at least the past 50 years.

•Continue to operate as an independent, for-profit business (i.e., it cannot be operating as a subsidiary of or have been absorbed into another business)

•Maintain a good business relationship with the state.

The Hurley family came to Atascosa County from Tennessee in 1876. Felix Hurley opened a general store in Ditto and served as postmaster. Later the store was moved to Poteet continuing there until 1926. Hurley Mercantile Store carried everything a family needed, including caskets.

Millard Hurley saw the need for a funeral home and decided to enter the funeral profession. He attended the Ed C. Smith School of Mortuary Science in Dallas in 1925, and became the first licensed funeral director in Atascosa County. In addition to directing services, eh also dug the graves. Caskets were transported to the cemetery on a flatbed pickup. The family also offered burial garments, Millard’s wife Thelma would sew suits and dresses for the deceased. She also baked a chocolate cake and presented it after the funeral to every family the firm served.

The small funeral establishment in Poteet grew and eventually they acquired a vehicle that served as an ambulance and funeral car. In 1932 the Hurley’s purchased the G.A. Schroeder Funeral Home in Jourdanton and they operated the two homes. In 1938 they consolidated these establishments an opened the funeral home in Pleasanton. Living quarters were provided at the funeral home so that at no time the deceased would be left alone.

When Millard’s son Charles returned after WWII, he attended mortuary science school, graduating in 1947, becoming a partner in the business and his wife Joyce became the organist.

In 1953, the Hurleys purchased the R. R. Redus Funeral Home in Devine, providing funerals for the residents of Medina County.

Later, Patrick Hurley, Sr. entered the business after graduating in 1973, acting as funeral director and he ran the ambulance service for the county until 1980 when they donated their ambulance equipment to start the first EMS service in this part of Texas. Patrick

Hurley, Sr. also dug graves for all three of the funeral homes.

They purchased the Lange Funeral home in Jourdanton in 1975 and began Hurley Monument Co. in Pleasanton the same year.

Six generations of the Hurley family have provided service to the community. Over the years Hurley Funeral Home and Monument Company have greatly supported the efforts of the Atascosa County Historical Commission, providing information about local cemeteries and those buried in them and creating low cost granite markers for some of the county pioneers, whose markers are missing or illegible. This information would be otherwise lost through time and the elements.