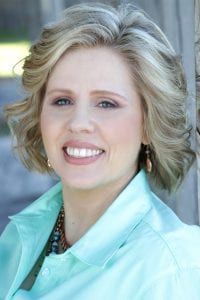 Since childhood, Pleasanton author Holly Castillo has been drawn to writing for the way it allows one to travel to a different world.
A successful book launch for “Texas Conquest,” the first book in her Texas Legacy series, was held on June 10. The event offered some Texas-sized fun at Alamo Cafe in San Antonio with dinner, drinks, games and prizes. The Twig in San Antonio helped Castillo with the book launch.
A native of Dripping Springs west of Austin, Holly grew up around horses and cattle. She had a Palomino as a young girl and described how her long blonde hair would blend with the horse’s mane when she rode.
Holly was active in 4-H, speaking events, the horse group and cooking was one of her specialties. She won several scholarships, one of them being a scholarship to attend Texas A&M, but then met her husband and everything changed. Holly ended up going to Southwest Texas State University, now Texas State University. While there, her husband Rudy Castillo III proposed to her.
“He was working at Killeen and I was working in north Austin. Going to school in San Marcos and living in north Austin– all that became too much. I ended up dropping out of school and we got married.”
The two have been married for 17 years.
They ended up transferring to San Antonio, to be near Rudy’s family in Pleasanton. Holly was a floral manager for H-E-B while her husband was a produce manager. He is now employed with DSI Systems Inc.
Over the years she moved from the floral department, to a coordinator for the engineering department at the corporate offices. After receiving the H-E-B scholarship, Holly returned to school and earned a degree in Human Resources.
“I was in the recruiting department for nearly eight years. It was phenomenal. Being a writer, you love asking those questions and finding out things about people, because you never know what you are going to learn,” said Castillo.
She loved learning about new people and what they were going through in their lives. She loved recruiting and her team. A favorite part of her job was calling hopeful applicants to offer them a job.
She worked at H-E-B for nearly 17 years, until becoming a stay-at-home mom following a failed back surgery. She followed with three more surgeries, which still have not fixed her back.
During her last surgery in June of 2013, she had a cerebral spinal fluid leak and came close to death.
“My mother-in-law, a year after it happened, told me, ‘I didn’t think you were coming home to us.’ I just remember I was in so much agony.”
Doctors are hesitant to do anything else with her back, since it was so severe the last time. Holly makes certain to follow a specific routine and stay current with her medication. She also has a pain management doctor.
“They didn’t think I was going to be able to walk. They said I was going to be in a wheelchair and I said, ‘Nope, it is not going to happen.’ I’m very stubborn. My former boss used to call me a bulldog.”
She learned to walk again, although she still falls much of the time.
“I have to laugh at it, because if I don’t then you can go down that dark hole. I’ve been down that dark hole and I’ve been able to come out of it. What really pulled me out of it was, I started writing again.”
She knew she had all these stories she worked on before. She was determined to see what she could do with them. She began writing, which brought her out of that depression.
“I was excited to be doing something everyday. I ended up writing this novel here, last year. I went to multiple publishers and agents. Right at Christmas time, I got an e-mail from a publisher.”
After receiving e-mails from two publishers interested in the series, Holly chose Tule Publishing which works actively with TV producers to turn those books into made-for-TV movies.
Castillo signed with them in January.
“I am a little bit overly-ambitious, so I said I have an idea for a Christmas story to go with this. It is going to wrap everything up in a nice, neat package.”
The company asked her to send them her proposal, which they fell in love with.
“Texas Conquest” came out for the public on June 20 and is available on Amazon. The book will also be going into Barnes and Noble stores soon.
“It is a Texas historical piece and we are surrounded so much by the ranching and the lifestyle of the way it was. It just seems to come out of every corner. You discover it here and there.” 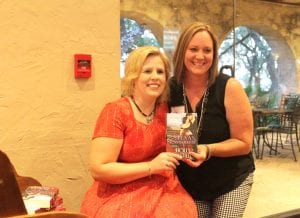 Her initial inspiration for the book came from working at the H-E-B corporate offices, which have basements and tunnels that run to all the different buildings. It made her curious about the Alamo, the Revolution and the stories behind them.
“Texas Desire,” which follow the Battle of the Alamo to San Jacinto will follow “Texas Conquest.” The third book in the series is “Texas Heat.” “Texas Christmas” will be coming out in the fall.
All of the books revolve around the Torres family and the three sisters: Angie, Olivia and Serena.
“Texas Christmas” follows mid-wife Gabriella (the Torres sisters’ cousin in Corpus Christi) who aides Olivia. She falls in love with a new doctor who is allowed to stay at the Torres family home, after his living quarters are severely destroyed by ice and snow.
“He is an orphan who grew up not having anything or anyone. Being surrounded by family and the love and the warmth, he is enjoying it.”
When Gabriella finds out he has never really truly experienced a true Christmas, she takes it upon herself to show him what a real Texas Christmas looks like. He learns traditions such as how to make tamales and the Posadas.
“So during this time of her teaching him all about Christmas, they fall in love and then Olivia’s child is born.”
Other future subjects include the Texas Rangers, Texas ranchers and oil tycoons. It follows from 1835 to 1902, giving readers a good glance of the political history that went on and the things that Texas went through as a republic, before becoming a state.
Holly described her husband as the inspiration for the heroes in her book, as he has been very supportive throughout the whole process. They have two children, Rudy IV who will be a freshman and Sierra, who will be in fourth grade.
The family lives on a ranch in Pleasanton, the perfect inspiration for Holly’s books. Her rancher series will be based in Pleasanton.
It is an exciting, fun time for Holly. She loves letting her imagination run wild through writing.
“Anything you want to happen, you can make happen in writing. I tell people if I wasn’t writing, I’d be clinically insane because I have so many voices in my head talking. They are the voices of the characters and there is a story that they want told.”
Her son is currently reading one of her books and it amazes her.
“It makes me feel so good. Writing for the joy of others… there is nothing like it. There is nothing to compare it to.” 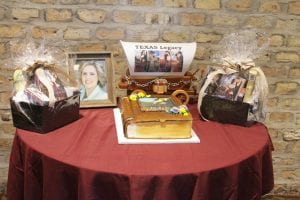