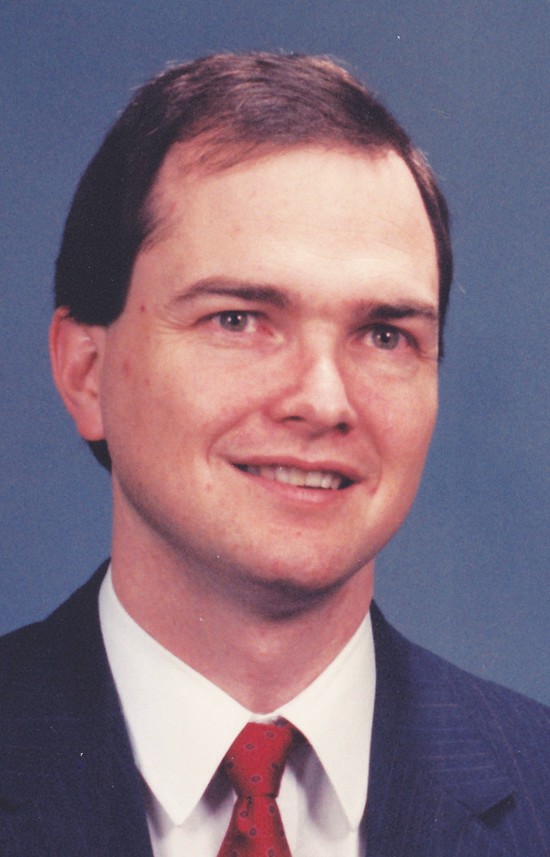 In this third segment of the ‘old Breaker home’, Cockrell Canyon and a misnamed country road, there will be stories about ‘a Preacher’, ‘swimming beneath the railroad tracks’, ‘how hoboes are able to board trains’, ‘15 dollars to go by train and attend the State Fair’, ‘gathering neighbors old shoes to earn money’ and ‘The Porter State Pigs’ as related by J. Taylor Brite and one of his sons, Tom Brite.

“My father (Tom S. Brite) used to take us to the corner of Crain Rd. and Hwy. 281. He’d park in an area where there was a preacher talking,” said J. Taylor Brite, retired District Judge, who lives in Pleasanton. “The preacher would come, stop, preach and take up a collection. He really liked to hear him preach.

“A story I want to tell you,” said J. Taylor, is about an area on the west side of the railroad tracks, going north, not to far from Crain Road, that had those entrances under the tracks where the water goes through.

“Back in those depression years you had no place to go swimming. I was about 10 or 11 and my sister, Bessie, was two years older than I was, that would be about 13.

“My father found that place under the tracks and on the other side was a pool of water when it rained. ‘It made a pretty good little swimming pool’. And he’d take us up there – we’d get into our swimming suits and then walk under the train tracks – there was concrete underneath that led to the area where the water emptied on the other side and formed a pool there. It was deep enough for us to swim in it.

“Mother would fix a picnic lunch for us sometimes when we went out there.

“While there, one time, while I was in the pool, I remember, my sister Bessie, as usual, had the habit of running on that concrete and when she’d get to the end, she would jump in the pool, until one time when she ran and started to jump, she slipped and hit the back of her head on that concrete and cut a pretty good gash. My father got her out and headed to North Pleasanton where they had a doctor. Bessie was patched up and everything was fine.”

J. Taylor remembers about the Page Hotel in North Pleasanton that was located on First Street near the old ice house.

J. Taylor said, “The hoboes would gather near that hotel. The train had to stop to get water and that gave the hoboes an opportunity to get on (in a box car). The water tower for the train’s steam engine was in that area near the train roundtable and repair shop located in North Pleasanton.

“The lady who owned the hotel was real nice to the hoboes. Word got out that they could go there and she would feed them.

“So, she assumed the job of feeding them.”

J. Taylor continued, “Another story, while I was in high school in 1936 and the Texas State Fair was going on, the train had specials for everything and a bunch of us got on the train and rode to Dallas. I believe we stayed for two full days. We’d come back on the train, all the while with sponsors from the school, of course, who went along with us.

“Seemed like you had to have 15 dollars to go on the train trip to the State Fair. That was a lot of money then. My sister, Bessie, also went on the trip.

“I didn’t have any money in those days. So, I sold the Grit newspaper and did other odd jobs to get some. The Grit paper sold for a quarter and ‘that was a high price at that time’. I sold greeting cards – anything to make a nickel or dime.

“For Mr. Leystra, a shoemaker, I’d go around houses to see if they had any old shoes they wanted to get rid of. I collected shoes ‘from all over’. I’d take them to Mr. Leystra and he’d fix ‘em up and sell them to make his money. He’d give me ten or fifteen cents a pair. We had ‘a good deal going on there for a while’. People liked to get rid of old shoes, you know. ‘Those were the days’.”

J. Taylor continued, “I’ll give you some information about Cockrell Canyon. The reason I knew about that canyon off Crain Rd. was through Iris Andrews, who lived out on 281 – I was a lot younger back then. For a church class, she would, several times have parties at Cockrell Canyon. She would take us out there and she’d give us a picnic lunch after which we would come back to her house and do other things.

“I knew Mr. A. A. Cockrell whose family it was named after. A. A. had a real estate busiiness that was located in a small structure at the corner of College Street and Hwy. 281. It was located next to an earlier barbecue place where McBee’s Bar-B-Que is presently located.

J. Taylor’s son, Tom, said, “I guess it was around 1979 or 80 when Joe Vickers and Norman Porter, Jr. and I were going to Abilene Christian. ACU had the NAIA National Track Meet at their school. And so, Uncle Norman brought Berry Bridges (Pleasanton High School Ass’t School Superintendent) and a couple of coaches and me and Norman and Joe. This was about a four day event.

“There was a restaurant in Abilene at the time called Harry Jordan’s. It was right on Interstate 20 about two or three miles from the school. We would go there when we were students because it was an‘all you could eat’ restaurant. Ten of us, not counting Uncle Norman and Berry Bridges, we young guys could just eat ‘until they ran out of food’.

“The restaurant would prepare one meal for each day, being one particular type of food and this time it was enchiladas.

“We all decided, going in, we were going to eat a 100 enchiladas between us. The waitress kept bringing us plates full of enchiladas. You know, a big ole’ tray of enchiladas.

“Finally, she just grew suspicious and looked under the table to see where we were putting ‘em. She ended up calling us, in a nice way, ‘ya’ll are just a bunch of pigs’.

“Oh yes, and how can you guys run well at the track meet after eating so much. (Of course, they were college students only there to watch the track meet.)

“So, Uncle Norman got to thinking about her calling us ‘pigs’. And that night he went out to WalMart or some place and he got two big poster boards and put them up on the sides of his van and they read ‘Porter State Pigs’. ‘Like we were a school!’

“So, the next day we come out to get in the van and we see these signs on the side of the van that say ‘Porter State Pigs’.

“We were pulling into the school and one of the guys that was telling people where to park, motioned us into the parking lot where all the schools parked.

“He thought we were a school competing in the track meet.

“That always stuck with us, being the ‘Porter State Pigs’. That became a new thing. We had t-shirts and caps and Uncle Norman made Christmas ornaments saying Porter State Pigs – so that was our symbol, the pig.

“From then on, we would have Porter State Pig parties and reunions and ‘stuff’ ‘like that.

“My kids know it and we’re passing down our ‘pig hats’ and ‘pig shirts’, ‘pig Christmas ornaments’ and everything.

“This is now a 35-year old tradition of ‘Porter State Pigs’. 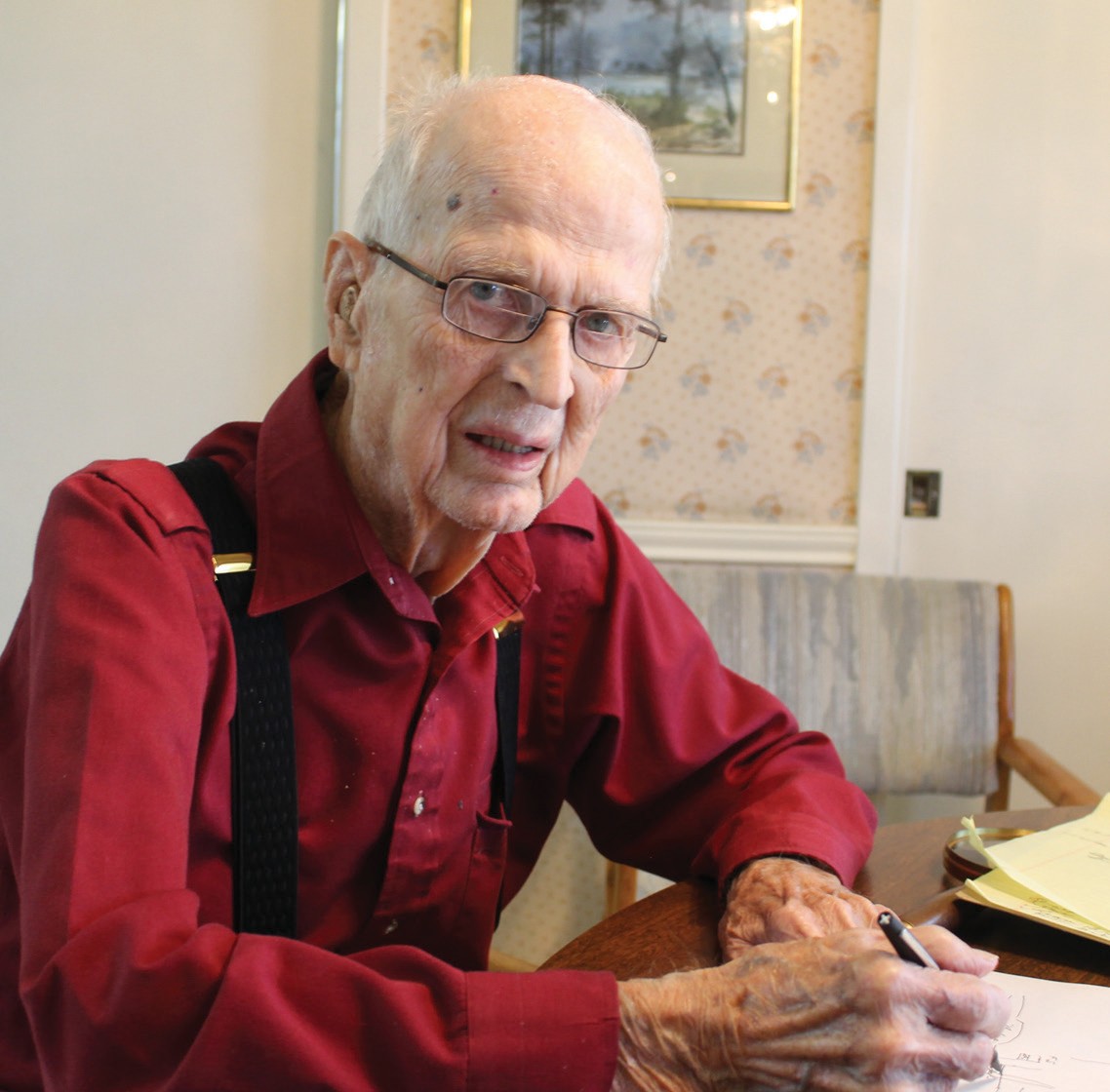 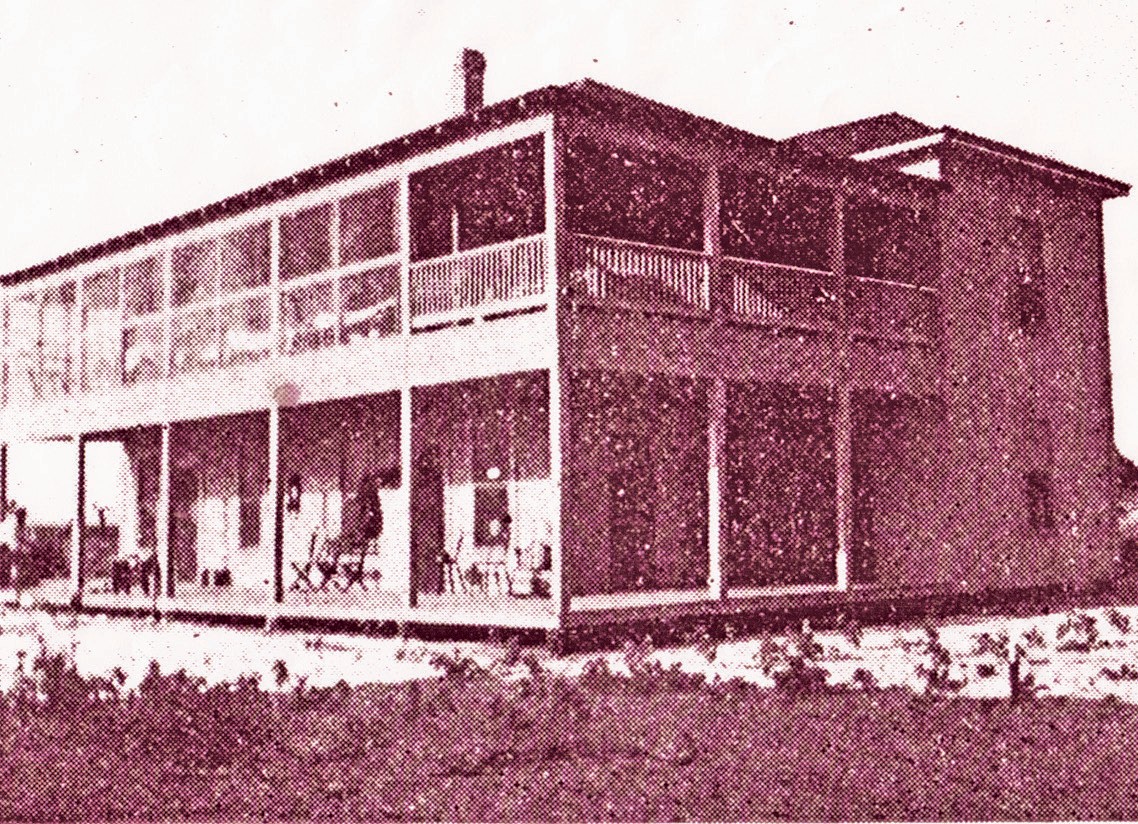 The Page Hotel on First Street in North Pleasanton, built in 1913 -original owners were J. K. and Jennie Page. Hoboes would be fed at the hotel. 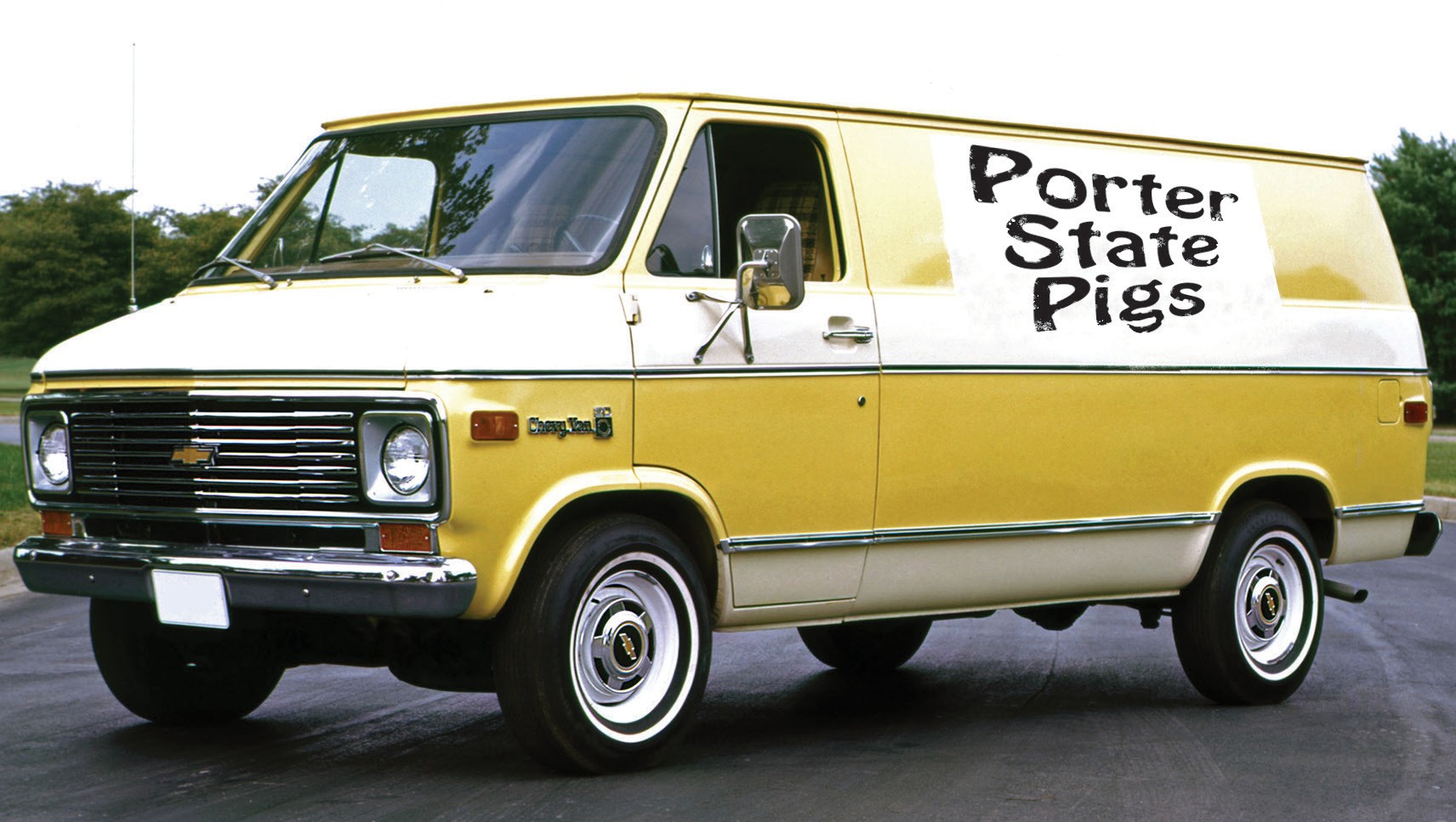 Replica of about what Norman Porter, Sr’s van looked like around 1979 – 1980, when Norman made signs saying “Porter State Pigs” for both sides of the vehicle.