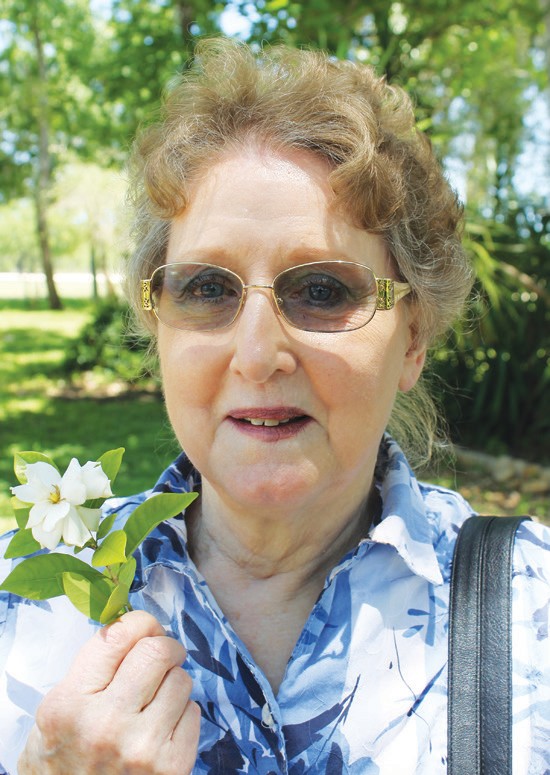 Lynnedale Bramlett, with gardenia bloom, remembering how Leona Brown, grandmother of Norman Porter, Sr., had made a wedding bouquet for her from her own gardenias.

‘when you get on a horse, you have to be the boss, not the horse’, ‘I was able to work the wiper bar by hand to get the rain off the windshield’.

Lynnedale Bramlett said, “We lived in the Breaker house from 1945 until about 1950.

“Mother (Ruth Calhoun) was raised on a ranch that went a mile along the Rio Grande River and fifteen miles inland. My grandfather raised mules there for the government and also raised vegetables along the river because it was fertile. We lost that place during the depression and moved to the Mission, McAllen area in the valley.

“My parents were married when my mother was 16 and dad was 20. There’s a story that goes that ‘they ran off and got married’.

“When my grandfather started a big dairy down there in the McAllen area, we would visit, and this might sound bad now, but we’d take ‘toe sacks’ with us and we’d get baby heifer calves and put them in the sacks, tied loosely around the neck so they couldn’t kick or anything. We’d lay them in the trunk of the car, as many as we could, comfortably. We’d lay one in the front and two in the backseat floorboards.

“Mother brought the calves home to, eventually, start a small dairy at the Breaker place. I remember her having, later, about 14 milking cows. That was the beginning of the dairy. I believe those were mostly golden jersey cows.”

Lynnedale said, “When grown, they’d have calves and the dairy grew. She was milking 14 cows, morning and night, straining, sterilizing and bottling the milk and the next morning, it was taken to a grocery store at the intersection of Bowen and 97, where a medical supply place is at the present time.

“This was before they had the law of pasteurization. She sold raw milk, of course, at that time, that’s all you could buy anyway.”

Lynnedale said, “My friend, Cookie Cuthrell would come to stay over night and we had fun crawling out my bedroom window in the middle of the night to play in the moonlight. Another friend, Shirley Soward and I would ride horses together. The Sowards lived on the southwest corner of Crain Road and 281, later it became the Sammy Shearrer home.

Across the road from the Breaker house, there was a little red rock house that they rented to a hispanic family. Lynnedale said, “Once, the lady who couldn’t speak English, came to our house and was hysterical. She was screaming and carrying on and mother, who was raised on the Rio Grande, spoke Spanish and knew exactly what the lady was saying.

“She finally got it out of her that there were some men there speaking a language she couldn’t understand, and they looked different. Mother realized that they had escaped from a WWII stateside prison camp somewhere north of us and they were trying to get to Mexico. They wanted something to eat, but they scared the lady silly. Seems like there were four or five of them.”

Lynnedale had a brahman heifer calf that was kept in a corral near that red rock house. That brahman would get out into a peanut patch west of the corral. ‘We’d put her up, put her up and put her up’. She could jump a high fence and one day my mother took the shotgun and while standing in the middle of Crain Road, she shot to scare the heifer and she ended prone in the middle of the Road. It ‘knocked her flat down on her seat’.

“That was hilarious! She was so mad but she didn’t care!

“Anyway, during that time, Mrs. Burmeister (property west of the Breaker property) had a palomino mare, a beautiful horse and she couldn’t ride it because it was too wild and wasn’t completely broken. Mother borrowed the palomino, brought her over, cleaned her up and started gentling her to ride. She didn’t get up there and buck her and so on. She used a gentle approach and got her to where she and I could both ride her.

“It broke my heart when we had to give her back to Mrs. Burmeister. She had just loaned her to us.

“That mare came back twice before they got her penned up to where she couldn’t get out.

“Mother was good around horses. We bought two horses not long after that – a mare and a colt. The mare was broken but the colt wasn’t and my mother gentled it to ride.

“When you get on a horse, you have to be the boss, not the horse. Mother had the way of letting them know that without beating them or anything.

“The reason we bought the two horses was to run the cattle down Crain Road into the Breaker property,” said Lynnedale.

“When we moved the cows over there, one time, she was riding the colt that wasn’t broken well and she just had some blankets or toe sacks tied on with a rope for a saddle and I had a saddle on the broke horse. Well, her horse, Flicker, started bucking and bucked her off and she got caught up in the rope and ended up right under Flicker’s belly and I didn’t know what to do, because there wasn’t anything I could do. Finally she got loose, and Flicker wished she wouldn’t have done that to her when she got through with her. She really fussed her out. We ran dry cows back and forth several times, about a four mile trip, one way. The cows were taken to the Calhoun place to graze. The Calhoun home wasn’t built yet.”

This was at a time when the calves weren’t milkng yet and were being grazed until they became dairy cows.

“When I got married in 1954, Mrs. Leona Brown, Norman Porter, Sr’s grandmother, made my wedding corsage out of gardenias from my garden,” said Lynnedale. That was Lynnedale’s first marriage.

“I’ll tell you another story. The (Chris) Stanushes had a corral southwest of the Breaker property with a dipping place to treat cattle for ticks over on 97. So we ran our cows over there to the cow lot and one of the old cows took a fence out and ran towards mom and she just sidestepped her. She had a two by four and when she went by, she just whacked her and everybody was hollering, ‘get out of there, get out of there’. Mother was tough – she was a character.”

Lynnedale said, that when she was young, “Boy, share croppers used to raise the best black diamond watermelons in the northeast corner of the Breaker property. Some of them were ‘so huge’.

Lynnedale mentioned that when she was in the eleventh or twelfth grade (‘53 or ‘54), her teacher, J. A. Sumners, took her and other classmates up to Austin to some function. When leaving for Austin, Lynnedale suggested that they go to see Mr. and Mrs. Breaker, who lived there at the time.

“We went and knocked on their door. They knew me but they didn’t know the rest of us and I told them we were there for a function and thought we would try to come by and see them,” said Lynnedale. “They were just delighted, had us come in and fed us tea and cookies.”

“Something else I can tell you, my mother was a ‘crack shot’ and she would sit up there on the porch looking over our big garden out front and those ole’ gophers would stick their heads up and she would pop ‘em off with a 22,” said Lynnedale.

“In later years, Mr. Breaker would come out to our new home on Jack Poteet Road (IH37)and stay with us, he liked my mother’s good cooking.

“Our property was known as the Calhoun Dairy from 1950 until 1979. We sold milk to the Borden Company.

While they were building that home four miles west of the Breaker house, Lynnedale remembered going with her mom to Elmendorf to pick up some tile. She said, “The windshield wiper motor on the car had burned out and it was raining while mom was driving – I’m laying on the floor underneath the dashboard and was able to work the wiper bar by hand to get the rain off the windshield. ‘I was my daddy’s boy and my mother’s boy too, I guess’.

Lynnedale said her 30 years being married to her husband, Donald ‘seems like a week’. Lynnedale said, “When he gets up in the morning, he has a smile on his face, he has something happy to tell you – it’s a whole different world. 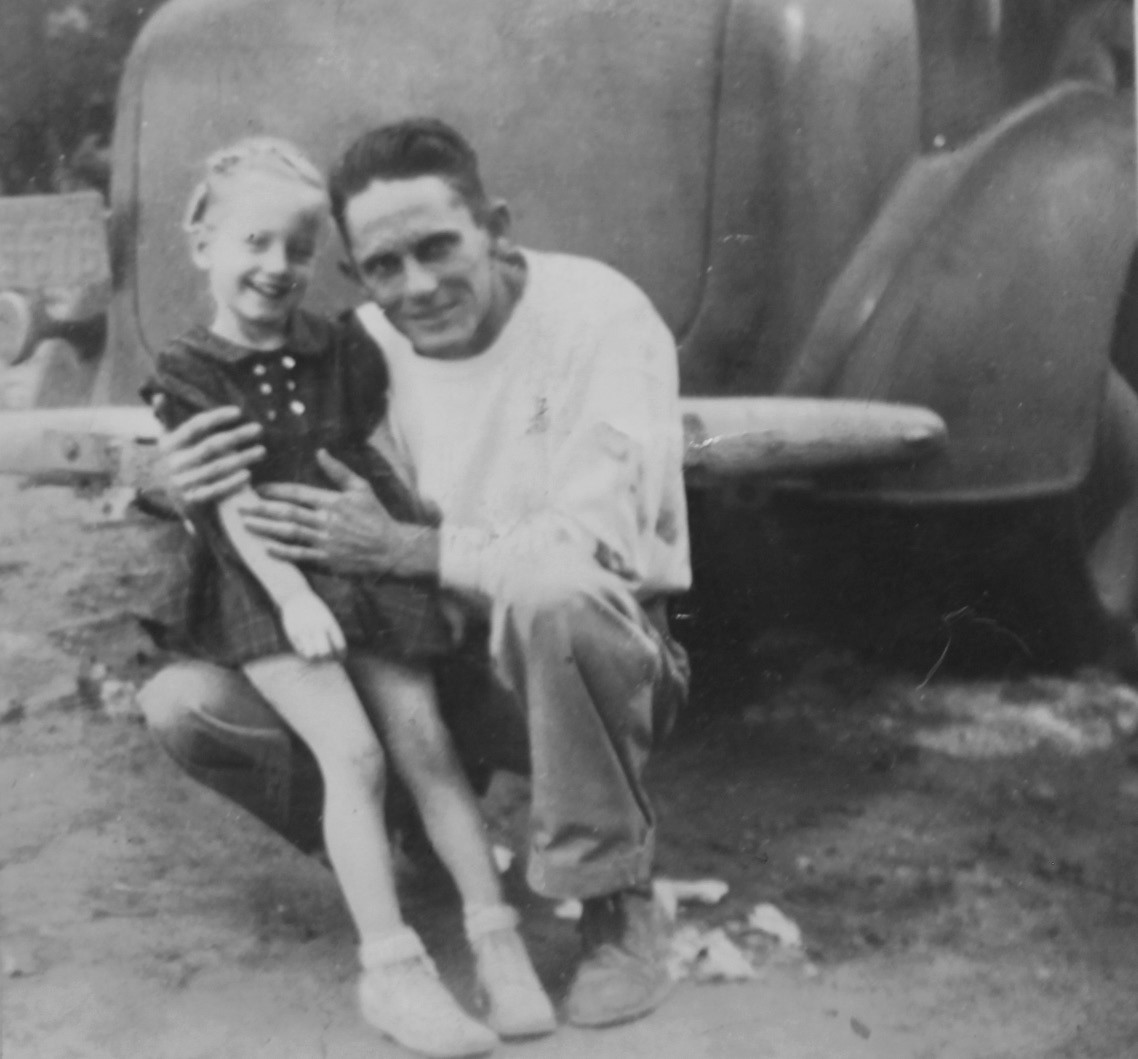 Lynnedale Calhoun with Tom Benson while Benson, her dad, Carl and E. R Breaker were working at the Marshall Ford Dam (later named Mansfield Dam) site north of Austin on the Colorado River. 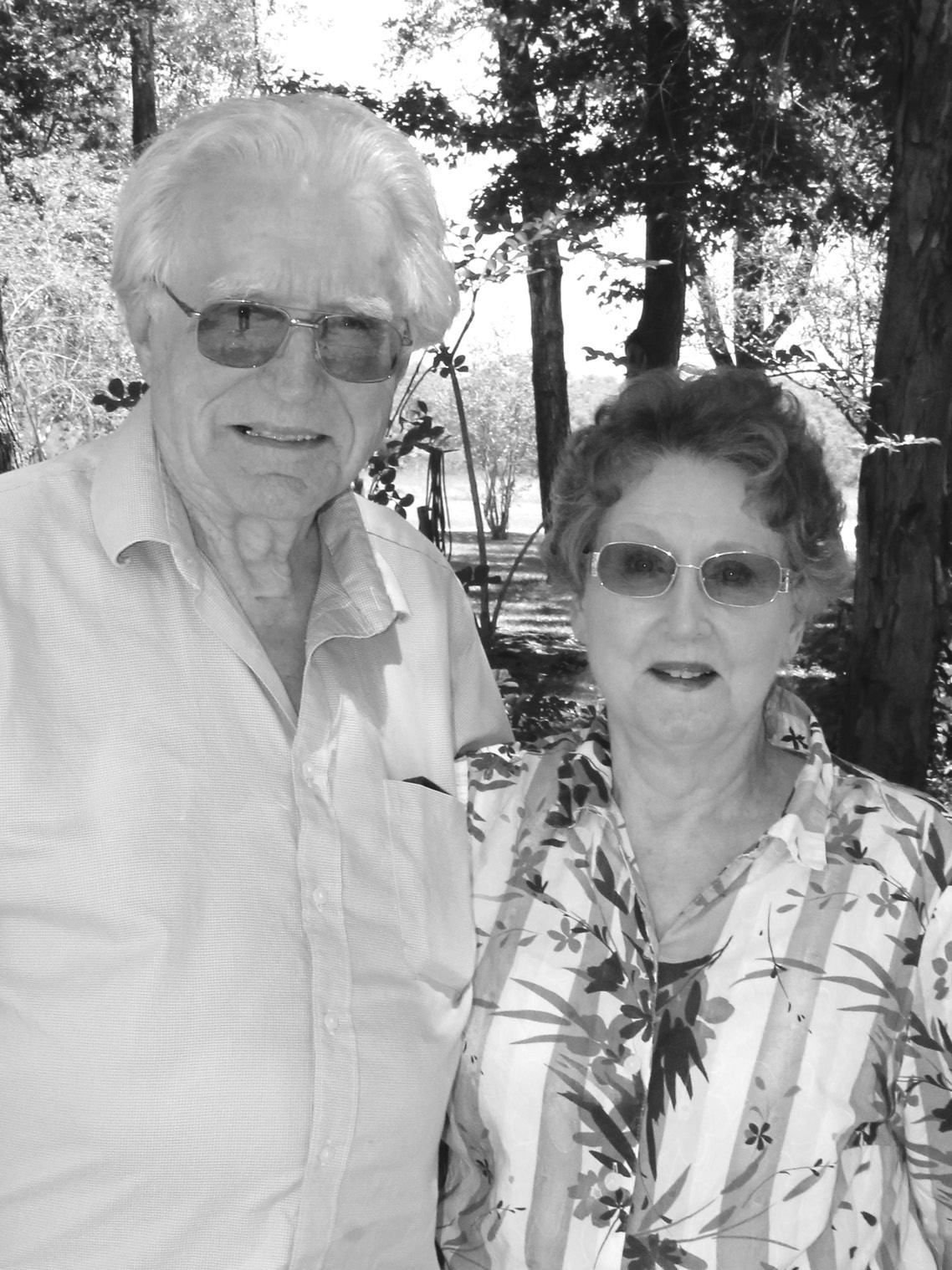