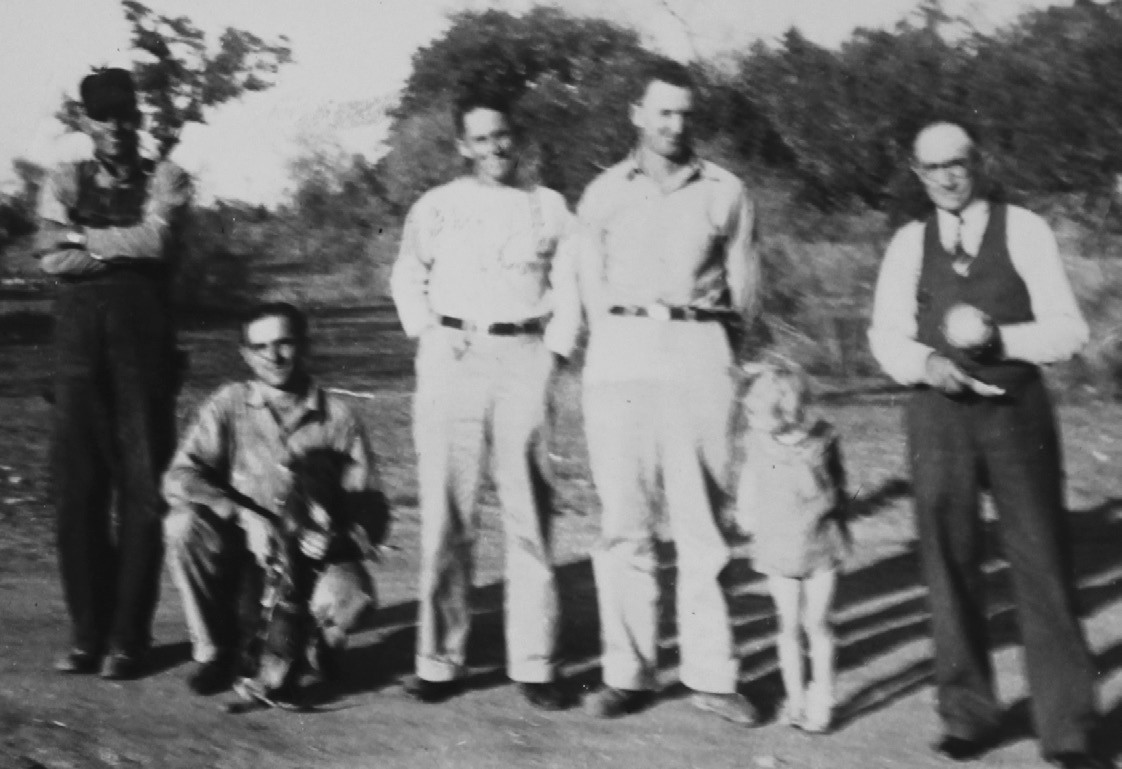 E. R. Breaker, standing at the right, next to Lynnedale. From left, two unidentified men and Tom Benson and Carl Calhoun.

‘snakes and everything else would tear us up and not let us come home’,

Lynnedale (Calhoun) Bramlett contacted me recently and mentioned that she grew up in the old Breaker house. Not only that, but her family knew E. R. Breaker, personally.

A. J. Ponder, as company vice-president and general manager of the San Antonio Uvalde and Gulf Railroad, known as “The Sausage”, hired E. R. (Ernest) Breaker, from Missouri, to be the chief construction engineer to build a new railroad from San Antonio to Corpus Christi in the early 1900s.

This led to construction of a two-story railroad depot and company office in North Pleasanton.

North Pleasanton had a large railroad repair facilty and engine turntable and was a major ‘player’ in operations of that railroad.

Lynnedale’s dad, Carl Calhoun, worked with E. R. Breaker on different projects. Wherever Breaker went, he often accompanied him. “My first remembrance of Mr. Breaker was at Marshall Ford, Texas, up above Austin. My dad and Mr. Breaker were working on a dam.” said Lynnedale.

The Marshall Ford Dam was located on the Colorado River, 13 miles northwest of Austin and was named Mansfield Dam shortly after its completion in honor of U. S. Representative J. J. Mansfield. The dam was a project of the Lower Colorado River Authority (LCRA) and the U. S. Bureau of Reclamation. Groundbreaking for the dam was in 1937 with completion in 1941. The reservoir behind the dam is Lake Travis.

Breaker, eventually, fell in love with a home in North Pleasanton, bought it and had it moved to property north of Pleasanton. That was done using railroad tracks and mules to pull the home that had been lifted onto a platform.

“Daddy came to Pleasanton before we did, we were still in Galena Park in Houston,” said Lynnedale. “I was still in the third grade there. We moved here and we rented from Clarence Bruce in North Leming and I entered the third grade in Leming.

“We lived there for a few weeks until the renters of the Breaker house got out. We moved into the Breaker place the last few weeks of the school year, in 1945.

After moving to the Breaker house at the time, and five years later, her family moving to their own home, Lynnedale attended school in Pleasanton through graduation.

“All the time we lived there, Mr. Breaker would come down and he would stay with us.”

“When we lived there, businessmen came out of San Antonio or Austin and they hunted on the property. They would always bring Harriet and me boxes of candy and good things. This was at the end of the war and it was hard to get anything like that.

“I thought the Breaker place was a wonderful area to live! It was like a ‘wonderland’ to me.

Lynnedale continued, “The McKinney’s, myself and other kids, went down in the top part of that canyon (Cockrell Canyon). We came back and were telling Mrs. Cockrell all about how great it was and she had a fit. She told us, ‘very definitely, never, never go down in that canyon again. And she was so adamant about it.

“She said, snakes and everything else ‘would tear us up and not let us come home!’

SEE CONTINUED story in the Pleasanton Express on May 25, 2016.