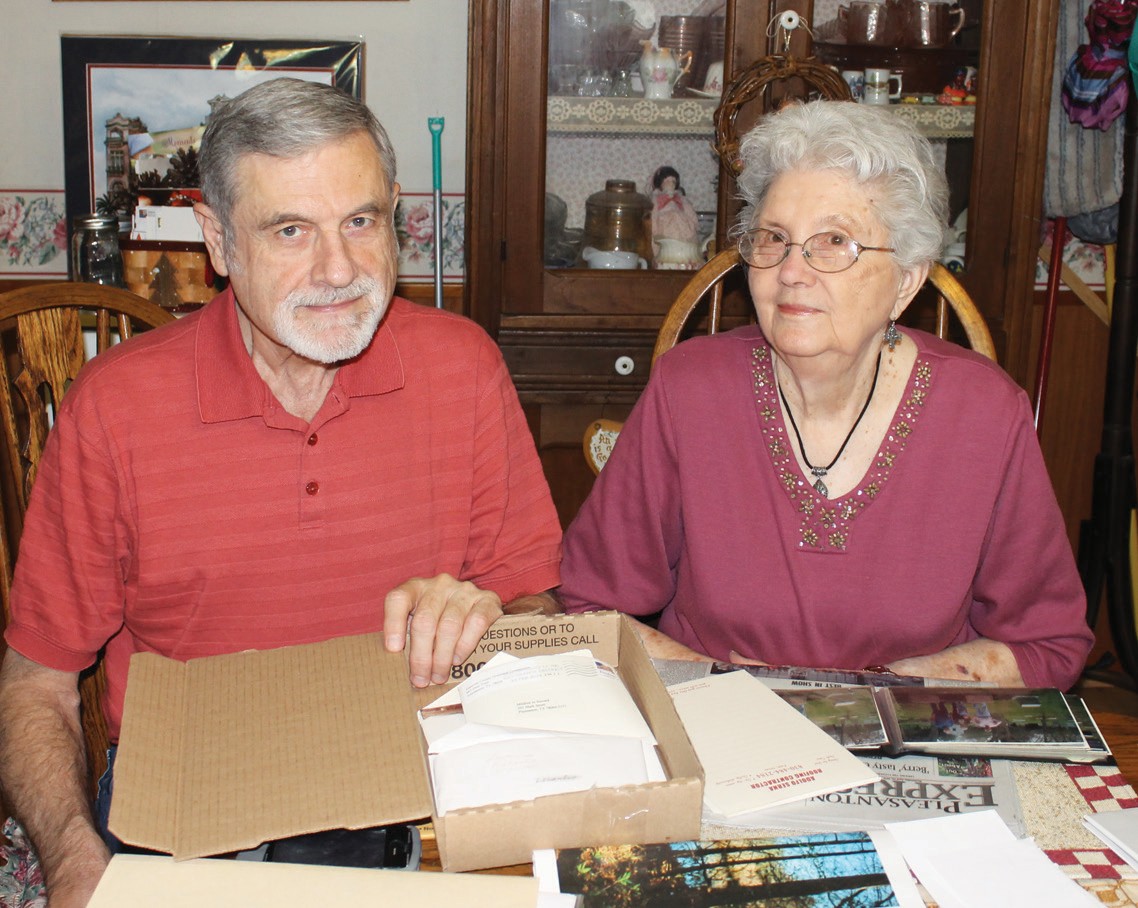 ‘he would come by every few days to critique’, ‘chased by Indians, making a leap with his horse across a deep, wide gully’, ‘close my eyes now and not only see them but smell the aroma’, ‘when we’d turn a corner, we’d just go scooting all over in the back of the van’

“As long as he was able, Norman made regular visits and we discussed historical events and projects,” said Mildred Soward (Norman’s sister).

“We were never at a loss for words when it came to county or Texas history or ancestors,” continued Mildred. “He always had something to show me or tell me.

“I grew up in Jourdanton after attending 1st grade in Pleasanton. Norman and I spent a lot of time with our grandparents at their nursery and floral shop on 281 North of Pleasanton.”

Mildred, a fine artist, did a lot of paintings of old historical buildings in Atascosa County. Some of those works of art were replicated on glass Christmas ornaments that the Atascosa County Historical Commission sold as a funding project. All of the ornaments were made from paintings from local artists.

“Norman asked me to paint a picture of an old Jourdanton railroad depot to use on the glass Christmas ornaments. Someone found an old black and white picture of the Jourdanton depot and I used it to go by,” said Mildred. “He would come by every few days to critique. He gave me good tips and was very helpful. Finally it met his approval and it was used.

“We thought at first it was an SAU&G depot but found out later it was the Artesian Belt depot. We laughed about this. There were two railroad depots in Jourdanton and Artesian Belt RR came first.”

Mildred said, “He was so interested in all the historic trails. He wanted very much to put up a monument for the Great Western Trail that came through Pleasanton. He wasn’t able to. That was when they drove longhorns up north.”

The Porter family would often visit cemeteries where relatives were laid to rest and do cleanup work. Martin Soward III said, “ I would like to point out that all of his living brothers, Lawrence, Richard and Morris and two sisters, my mother, Mildred, and Matilene Porter Kuretsch participated in this. They went with us, of course the sisters didn’t do physical work. We’d have a picnic at lunchtime.”

Martin mentioned, “Mother’s scrapbooks and notebooks are like an Atascosa County archive. She and her friends went all around the county and copied information off of tombstones. That was a while back. There are more graves in the cemeteries now but what she and her friend, Jean LaBorde, did was a good starting point for somebody looking for old graves. They did that back in the 70s, writing down all the information. They went to Lytle, Charlotte, Jourdanton, Pleasanton and Poteet – to all the little cemeteries they could find.”

In the Pleasanton area, Norman spearheaded a clean up of the Bonita Creek Cemetery. Eli O’Brien, an early county official, who had been riding on horseback about a mile or two out of Pleasanton, was chased by Indians, making a leap with his horse across a deep wide gully, avoiding the Indians and getting back into Pleasanton. He warned others about the nearby presence of the Indians.

“At our meetings, Norman always had a story of historical importance to tell.”

“I traveled to Austin with him when the monument was erected for the 17th century French sailor who was interred at the Texas State Cemetery in Austin,” said Mildred. “The sailor was discovered by the Texas Historical Commission with the LaBelle shipwreck.

“I was with Norman on many other historical events and it was great.

“Touring cemeteries was a favorite thing to do. So much history is there.

“Lake Porter was our great uncle thus not really an ancestor. Lake’s brother, William S. Porter, was the great grandfather of Norman and Mildred.”

Mildred said, “Norman and I, while living in Jourdanton at one time, would visit with our grandmother, (Mamo) Leona Brown, at the nursery north of Pleasanton on 281. They moved out there in ‘35, I think. But, anyway, Norman and I spent a lot of time with our grandparents.”

Martin said, “All of us, her grandchildren and great grandchildren, loved her. Mother and Norman had a real strong bond, spending a lot of time around her.”

Mildred said, “Being around Mamo Brown, I learned a lot about plants and flowers. I could recognize different varities of pecans. The flowers – I did a few things with her around the flowers. My grandmother was so particular about her plants and flowers. I didn’t want to mess up things. I watched her and I knew exactly how she did things. And she had a great talent for raising flowers and arranging flowers. ‘She could make something out of nothing’. She was that kind of person.”

Martin said, “I can close my eyes now and not only see them but smell the aroma from flowers in her nursery. You know when you walk into a nursery or a flower shop and that beautiful, wonderful odor that you get – with eyes closed, I can still get that feeling from that from when I was young.

“When we were little, sometimes we went on deliveries with ‘em. And they had a van and my mother’s younger sisters, Ruby and Linda, the twins, and I, several times would go with them and sit in the back. We would be there with the flowers in boxes and when we’d turn a corner we’d just go scooting all over in the back of the van. We thought that was great! There were no seats back there. It was just flat. (Mildred speaking) Norman and I did, too, in the back of the van. (Martin) After they used the boxes and didn’t need them, we’d get them and use those and make cars out of them.”

Mildred and Norman worked a lot with the Historical Commission. I asked for comments. Mildred said, “I’m not so sure of when we started with the glass Christmas ornaments. I think it was around 2000 or sometime around that time. At one of our meetings we decided that it would be a good, fun way for fund raising. When we first started we had the courthouse on the glass ornament. We continued on and I had done a painting of the rock school here in Pleasanton and we used that on one of them. Paintings were of buildings like churches, depots and other structures of historical significance. We sold a lot of ornaments.” 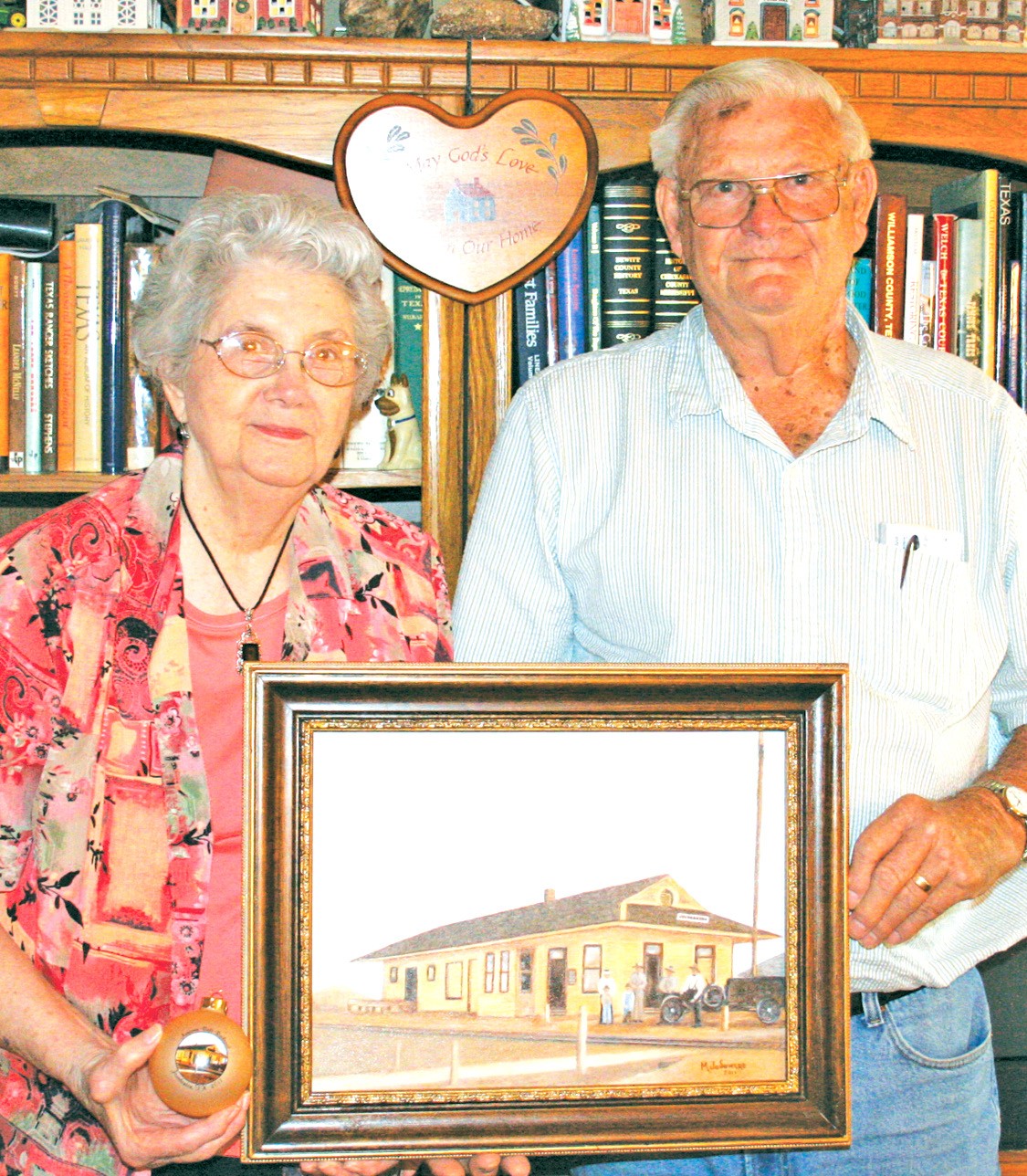 Mildred and brother, Norman Porter, Sr., with her painting and glass Christmas ornament of the Artesian Belt depot in Jourdanton.