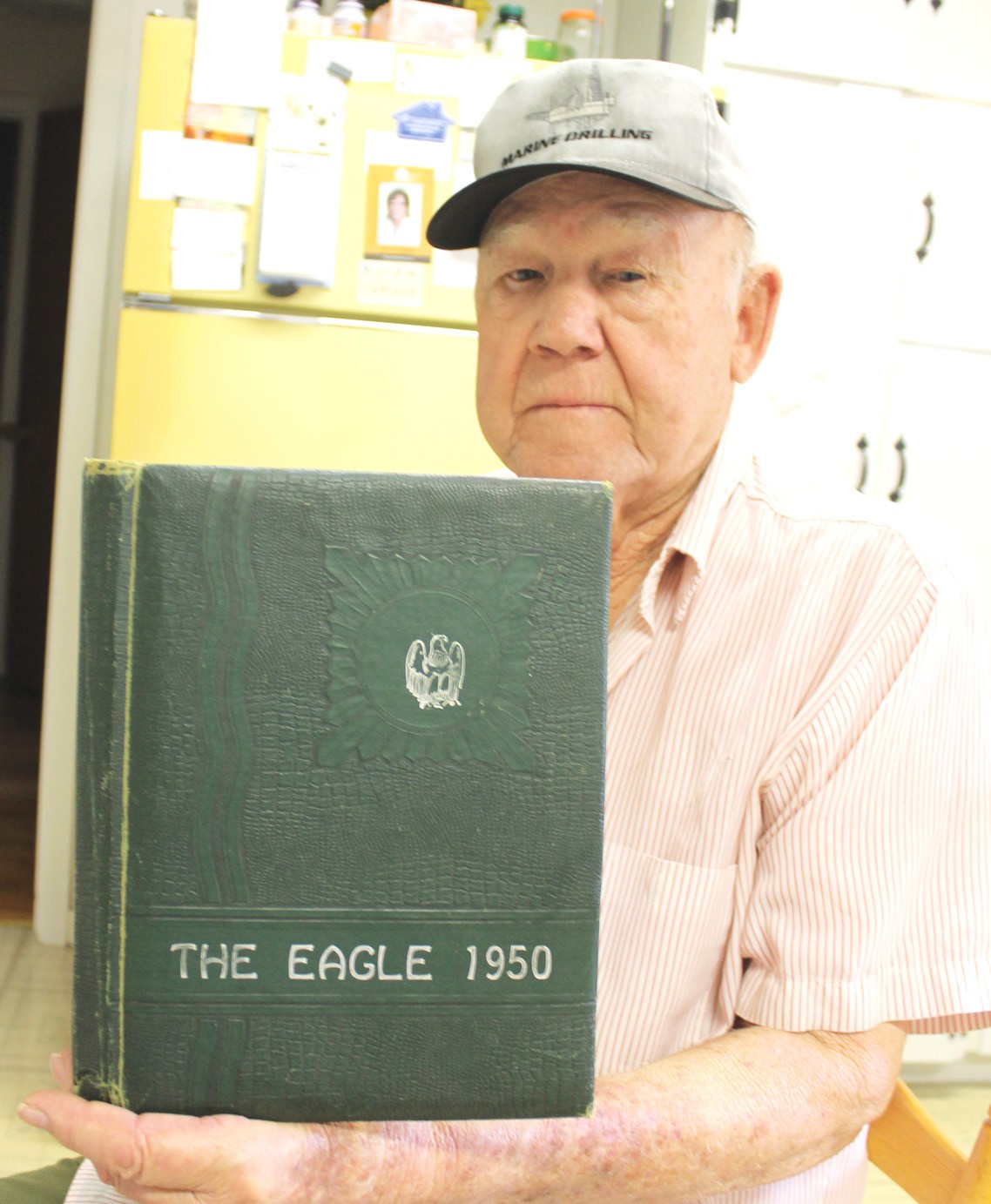 ‘He’d hit, I’d hit and the third person would hit…we were windmilling’, ‘we were working for 78 cents an hour’, ‘enjoying watermelons… who drives up?…the boss man – never fails!’

“A lot of us guys worked as roustabouts for Lewis Lease Service in the summertime,” said Marvin Deckert, an oilfield retiree living here in Pleasanton.

Lewis Lease Service, operated by Leonard Lewis, Sr., was located at the northwest corner of Main St. and Oakhaven, across from where the Dairy Queen is in Pleasanton. The lease service was next to J. B. Supply Co.

Deckert said, “I was working for Lewis Lease Service while in high school. Leonard Lewis, Jr., worked along with Norman Porter, Bubba Reed, Donald McFarland and myself.

“One thing Mr. Lewis liked about us boys was we were always trying to outdo one another. We’d work harder, we’d work faster! We had fun back then.

“Besides work around Atascosa County, we’d even go to Crystal City and work on jobs there for oilfield companies like Exxon, Shell and Texaco. When one of them wanted something done, we’d do it. A lot of times we built fences around pumper’s houses.

“I remember going to Bigfoot where we cut 2 3/8” tubing into maybe six foot lengths. We’d be in the back of a pickup driving those poles in the ground.

“We had two boxes of those poles to construct fences back there in the pickup.

“While back there, Norman probably would be in the middle or maybe Bubba Reed since they were the tallest. Three of us guys with sledge hammers would hit the tubing posts in a windmill affect. All three hammers would come down in succession, he’d hit, I’d hit and the third person would hit to drive the posts in the ground. Then we’d start all over again, continuing to build a fence line. We were ‘windmilling’ it and actually got ‘real good at it’. The pusher on us then was Frank Heffener (sp.).

“We worked all over out there for companies like Exxon, was Humble back then. We’d go into oil tanks and clean them out. But you couldn’t stay in there more than maybe five minutes. Otherwise you come out ‘drunk as a skunk’ and would get so ‘loop headed’. They’d have us in there sweeping them out.

“We did all kinds of stuff, one being pouring cement to form bases for pump jacks.

“When a workover rig would come to a well site, they would mark where the guidelines would be. We’d dig with a post hole digger and put the ‘deadman’ in.”

A ‘dead man’ in oilfield terminology is a piece of wood or concrete, usually buried, to which a wire guy line is attached for bracing a mast or tower.

That dead man would be cemented into the ground. They’d put a cable from the dead man to the workover rig to stabilize it.

I asked Marvin about Norman Porter working with him for Lewis Lease Service.

Deckert said, “Norman was a great guy to be around. He was tall and slender. He weighed about 175 and I was at about 205.

“We were just doing our thing back then, trying to make a dollar. We were working for 78 cents an hour. This work was always done during the summertime.

“We were going to work one morning on the way to Bigfoot or Pearsall, somewhere. We ran across a watermelon patch and wanted to get us a couple of watermelons. Wasn’t any fence around it. We were way back in the boondocks. Mr. Lewis would never find us. We cut the watermelons.

“Well, we were back there enjoying those watermelons and look who drives up -the ‘boss man’. Never fails!!

“While I was a freshman in high school, I played one year of football with Norman. He was a senior. That was ‘49-’50. They were all older than I was. Norman, Bubba Reed, Leonard Lewis, Sammy Neill. But I’d pass ‘em in the hall though. I continued playing football through my senior season.

“While in the service, Norman, was a cook with the Army at Fort Sam. One time they were maybe wanting to ship him off somewhere. He said that he’d rather cook for us over here at Fort Sam. It’d be close to home. That’s where he stayed and continued to cook.

“He played sports in the service. He went to Uvalde on a scholarship and that’s where I also had a scholarship. I wasn’t there the same time Norman was. He went there ahead of me. 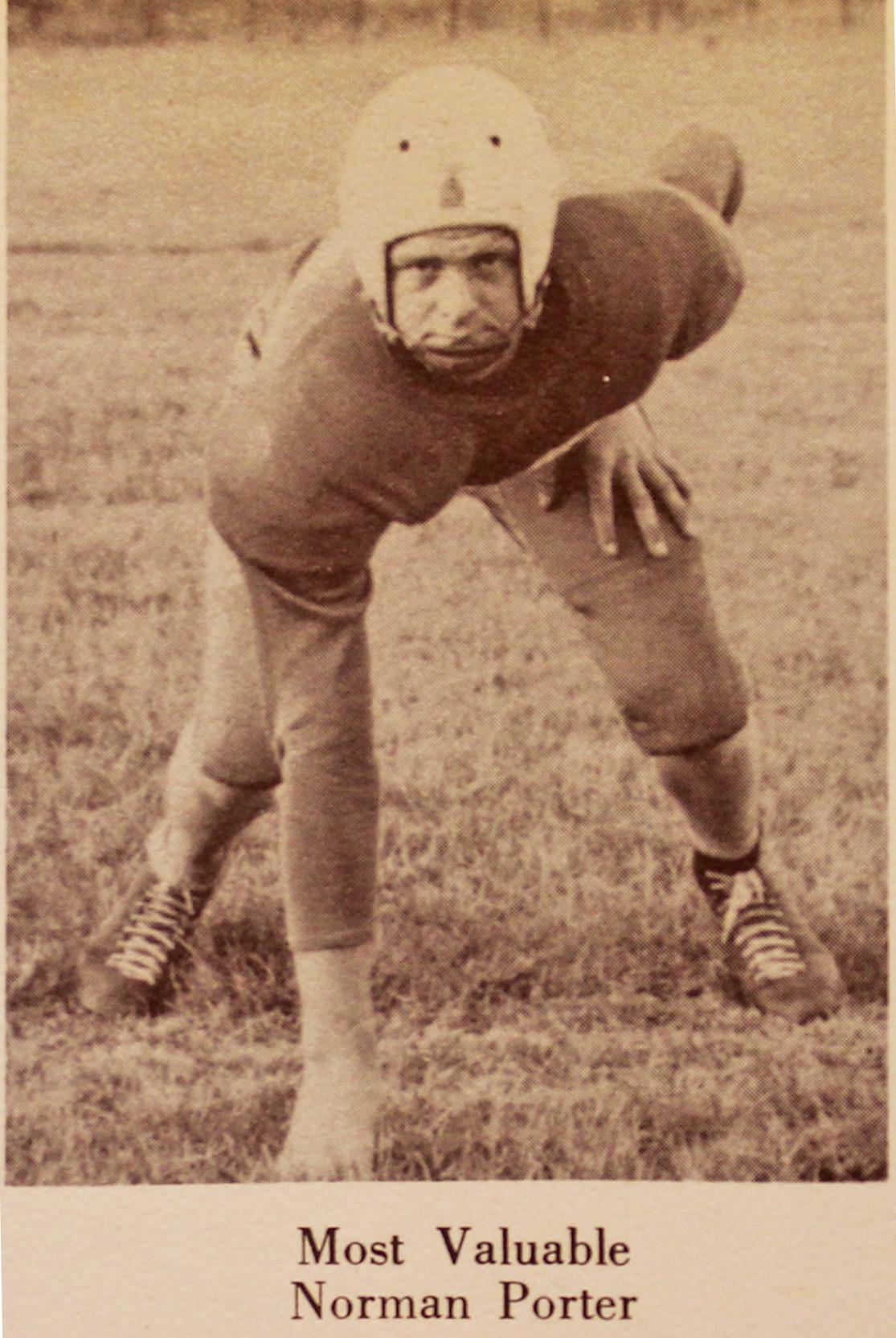 Picture in 1950 Pleasanton School Annual of Norman Porter, Most Valuable football player being pointed out by Marvin Deckert in his annual. Deckert was a freshman in 1950.