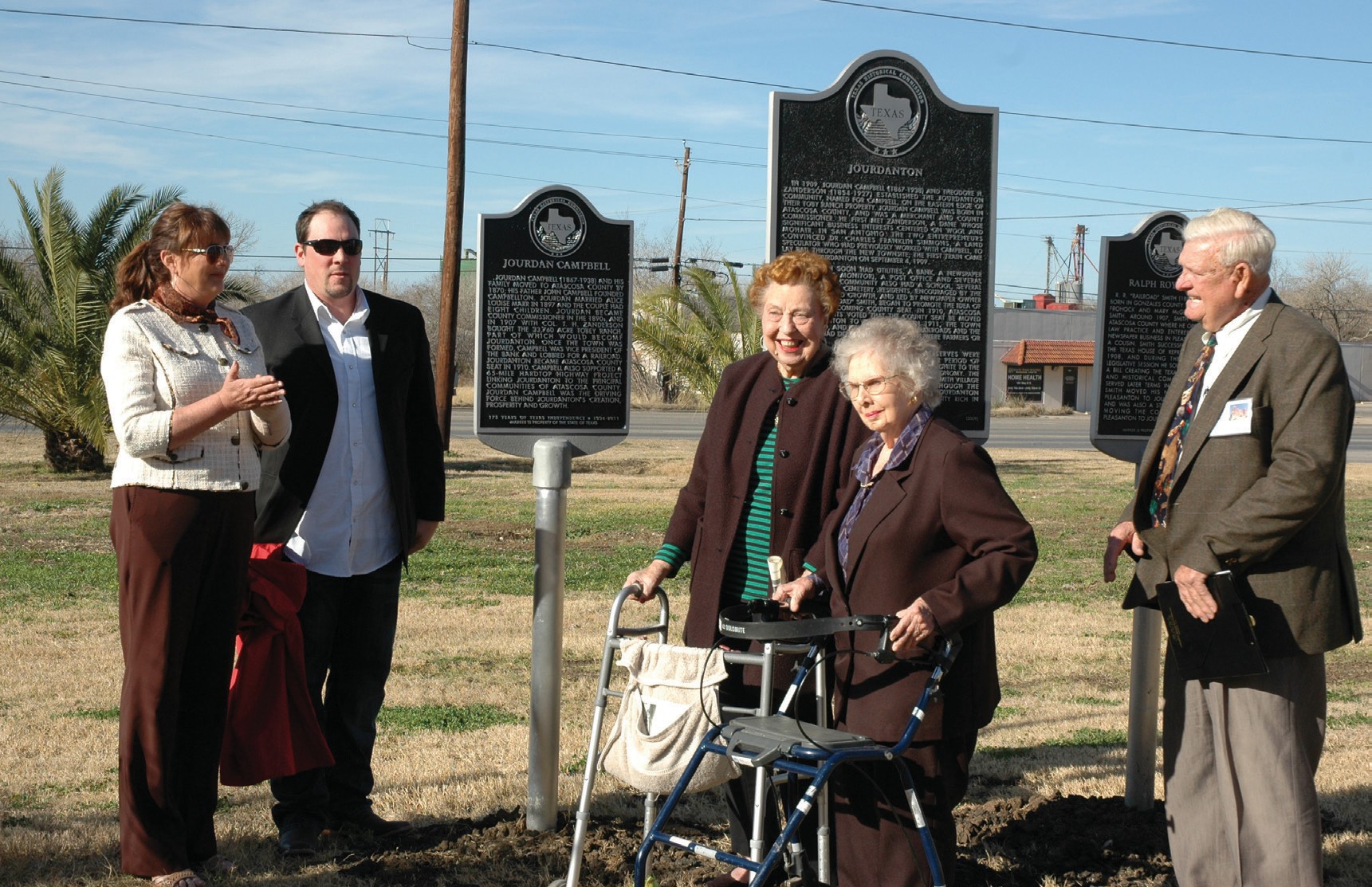 Descendants of Jourdan Campbell, Roxanne and her son August Peters (from left) unveil the newest historical marker at the dedication ceremony held in conjunction with the grand opening of the new Jourdanton Municipal Complex. Jourdine Tymrak and Lillian Wiede, longtime residents of Jourdanton join in the celebration along with Norman F. Porter Sr., Chairman of the Atascosa County Historical Commission.

“The name of the town of Jourdanton was taken from Jourdan’s first name,” said Porter, who along with Vice-Chairman Barbara Westbrook, Treasurer Sandy Zuniga and the members of the Atascosa County Historical Commission called for the three historical markers that were installed in the front lawn of the municipal center.

Westbrook said that Jourdan Campbell (1867-1938) was a charismatic man and “had great vision”, who along with Dr. Charles F. Simmons, and Colonel T.H. Zanderson, laid out the blueprints for Jourdanton. Jourdan helped to lobby for a railroad to come through Jourdanton and served for a time as the Atascosa County Commissioner. Westbrook read the last line of the new historical marker dedicated to Mr. Campbell, “Jourdan Campbell was the driving force behind Jourdanton’s creation, prosperity and growth.”

Mayor Susan Netardus recognized the former mayor and councilmembers that were around during the inception of the complex: Former Jourdanton Mayor Larry Pryor, Former Jourdanton City Councilmembers Randy Shearrer, Louis Lem and current Councilmembers Donnie Blue and Roy Morales. Netardus also said “For the naysayers who were against this building in the beginning, change and growth is always hard but it is something that we all have to go through, it’s just part of life, and I know in the future you will come to love this building. It’s beautiful and I know Mr. Campbell would be very proud if he were still here today.”

Congressman Cuellar said to the gathering “You should be very proud of the work that you have done.” Cuellar mentioned that the Eagle Ford Shale has added “tremendous economic development” to the Jourdanton area, but that “At the same time when you have that type of growth, you therefore have to provide more services.” He congratulated city council on investing in the city infrastructure, including the wastewater treatment plant and the solar panels that help reduce the cost of electricity used by the new building.

Speaking of saving costs, Jourdanton City Manager Dan Nick said in an interview with KSAQ that “no taxes were raised for this building. We have been doing this out of cash flow.”

Nick also said of Cuellar “The City of Jourdanton, Texas feel fortunate with Rep. Henry Cuellar being able to participate in the ceremonies opening our new 13,000 square foot Municipal Facilities on January 30, 2014. Rep. Cuellar has been actively supporting our community in so many ways over the years, it is fitting he was available to celebrate with all of us today.”

As for what’s next for the city of Jourdanton, Mayor Susan Netardus said that the council is working towards building a sport complex, with the goal of having it open by next year’s little league season opener in March. They are looking to build two little-league baseball fields, a junior sized baseball field and a high school sized field. The city is also considering what to do about the Jourdanton City pool. The 30 year old pool has formed a large crack in it, and Mayor Netardus said that it was looking like it would be just as expensive to replace and upgrade the pool as it would be to fix it.