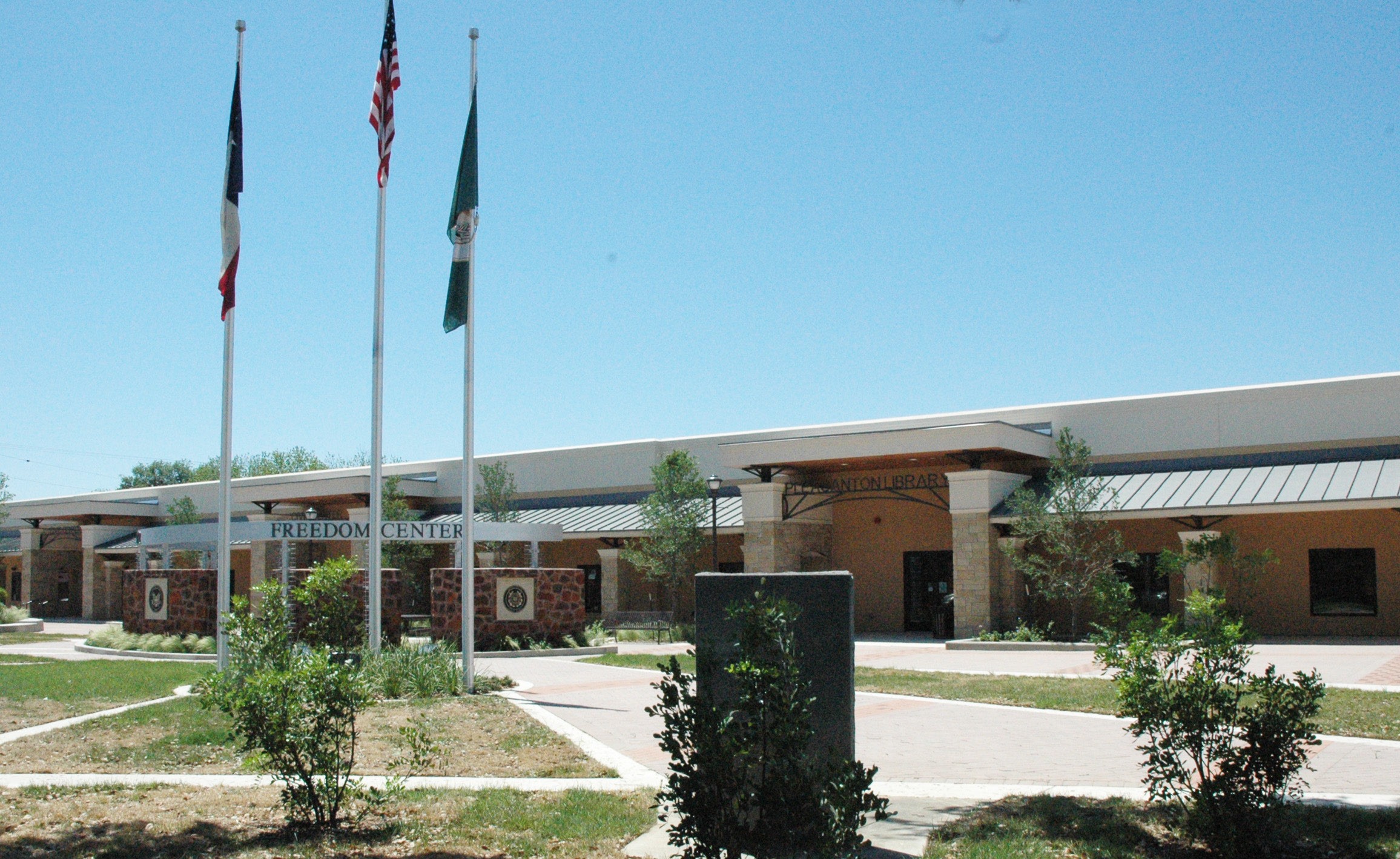 The east side of the Pleasanton Civic Center and Library Information Center has given the downtown area a major boost. The Freedom Center, sitting areas and landscaping invite citizens to enjoy their newest addition to the community.

The City of Pleasanton will celebrate the grand opening of its most recent completed project – The Pleasanton Civic Center and Library – on Monday, April 21 from 4-6 p.m. U.S. Congressman Dr. Henry Cuellar will be one of the featured dignitaries in attendance. A bit of history

In August 2008, the idea to convert two downtown buildings into a community center and library was conceived. Like many small American towns, Pleasanton’s Main Street stores had closed due to “Big Box” companies moving into rural areas. These buildings had housed two large and established businesses, Williams Hardware and Dowdy’s Men’s and Boys’ Wear. These family owned businesses had been a mainstay for over 160 years combined.

Some members of the Pleasanton City Council were hesitant to support the idea, but through the efforts of dedicated groups, the council voted 5-2 to approve the purchase of the buildings in December 2008.

For three years, the plans for the buildings were on hold. Council members and Committee members were at odds of how the plans should look and if the buildings should even be used.

A petition was circulated to support two initiatives in 2011. It was submitted to the council in January 2012. The council failed to adopt the initiatives, so an election was held on May 12, 2012 to decide the future of the project.

Voters turned out and passed both initiatives.

Shortly after, Keith Powell was named project manager. He provided the services pro bono. Powell, grew up in Pleasanton and moved back to raise his family and was pleased to be able to give something back to his community.

In November 2012, RVK Architects were chosen as the lead design consultant to complete the project. They offered three options – reuse, renovate or rebuild. The council accepted the renovation option.

The new year began with Bartlett Cocke being chosen as construction contractor.

The City Council became more united after the election and a Freedom Center area was then approved to provide a homage to our military personnel as well as an area where citizens could sit and enjoy the new surroundings.

A ceremonial groundbreaking and demolition on the old structures began in May 2013.

Much was accomplished through the efforts of the current Pleasanton City Council, consisting of Mayor Clint Powell, District 1 – Councilman Jimmy Magel, District 2 Councilman Abraham Saenz, District 3 Councilwoman Kathy Coronado, District 4 Councilman J. R. Gallegos, District 5 Councilman Roger Garza and District 6 Councilwoman Jeanne Israel as well as the City Manager Bruce Pearson and the whole City of Pleasanton staff. Previous members of the council as well as former city managers and mayors all had a hand in making this dream a reality.

The first official event was hosted by the City of Pleasanton for the Pleasanton Chamber of Commerce Awards Banquet held March 6, 2014. 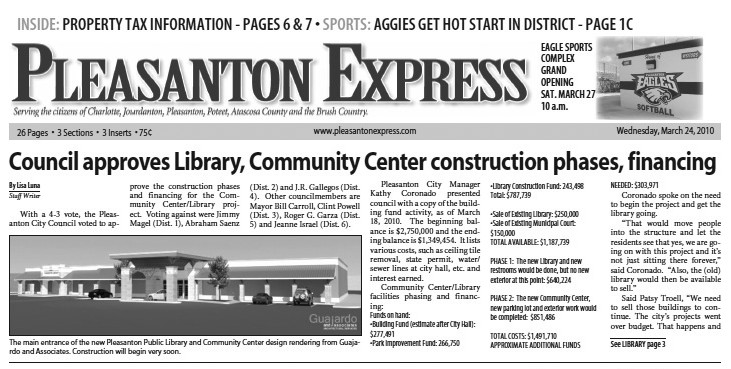 Shown above are some of the articles from past issues. The newspaper coverage on the projec’s progress won the Community Service Award from the South Texas Press Association Better Newspaper contest in 2013. 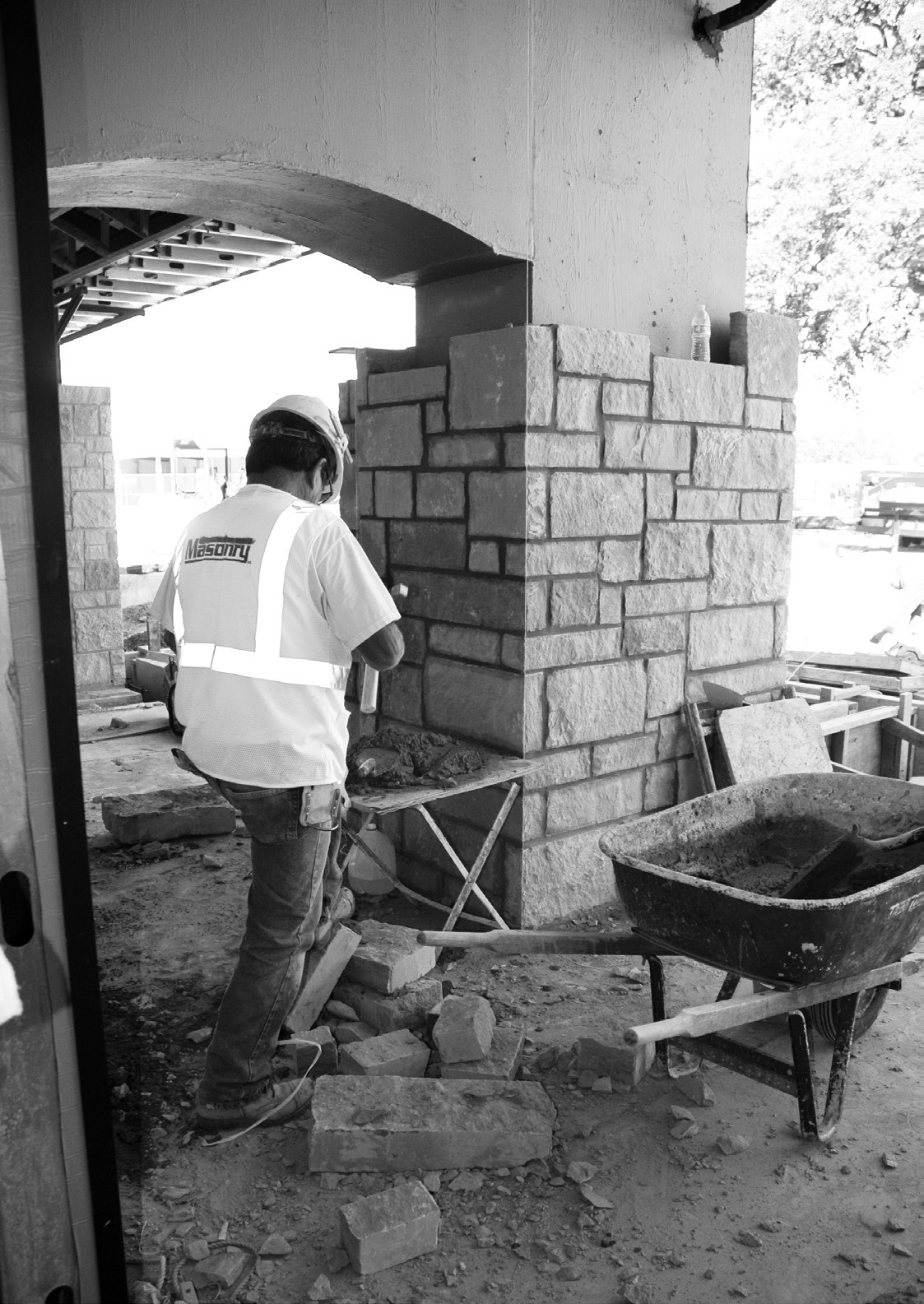 Mason sets the rock on the pillars on the east side of the buildings.

Main Street before the project began. 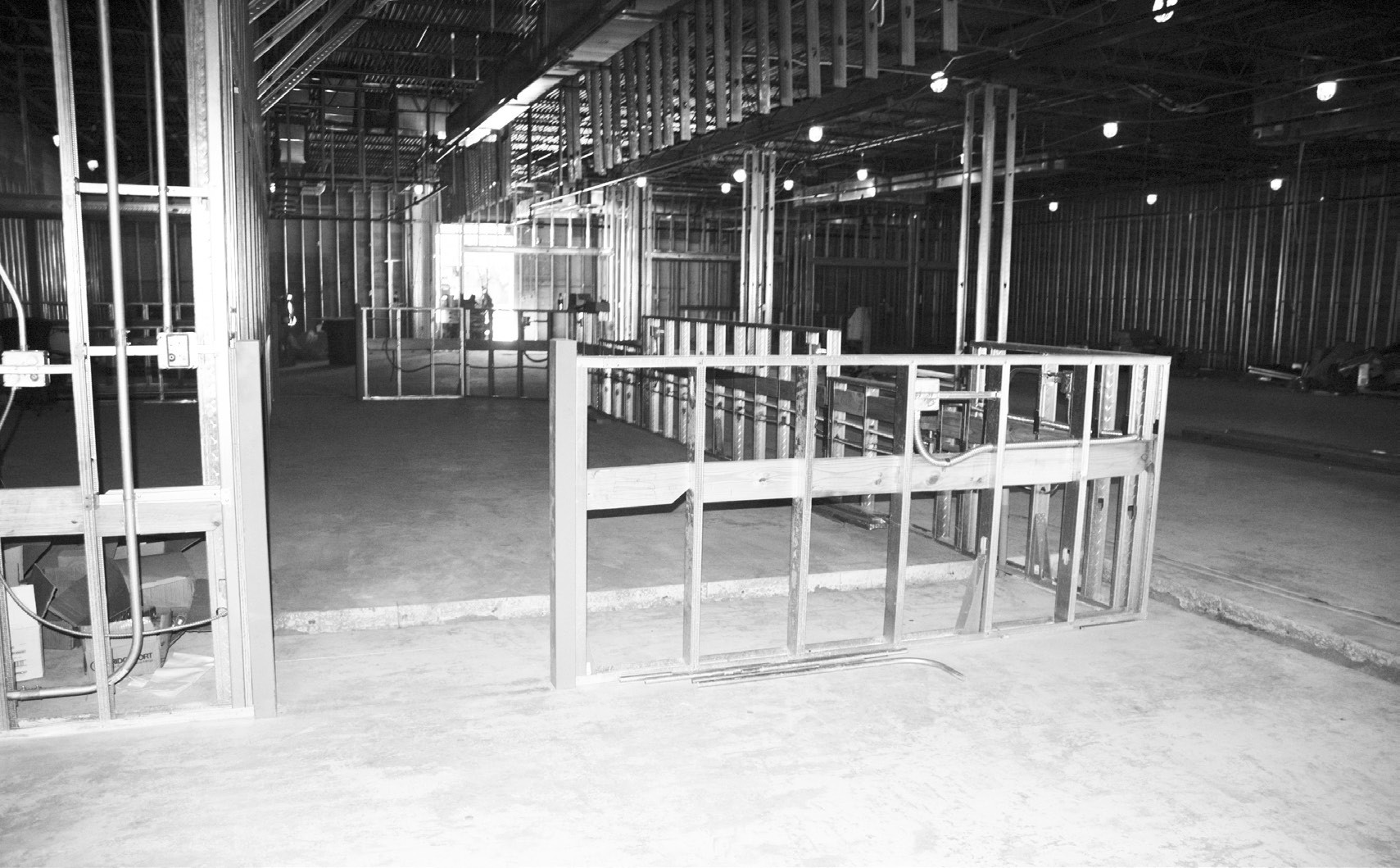 The metal framework in the new library was taking shape during the building phase. 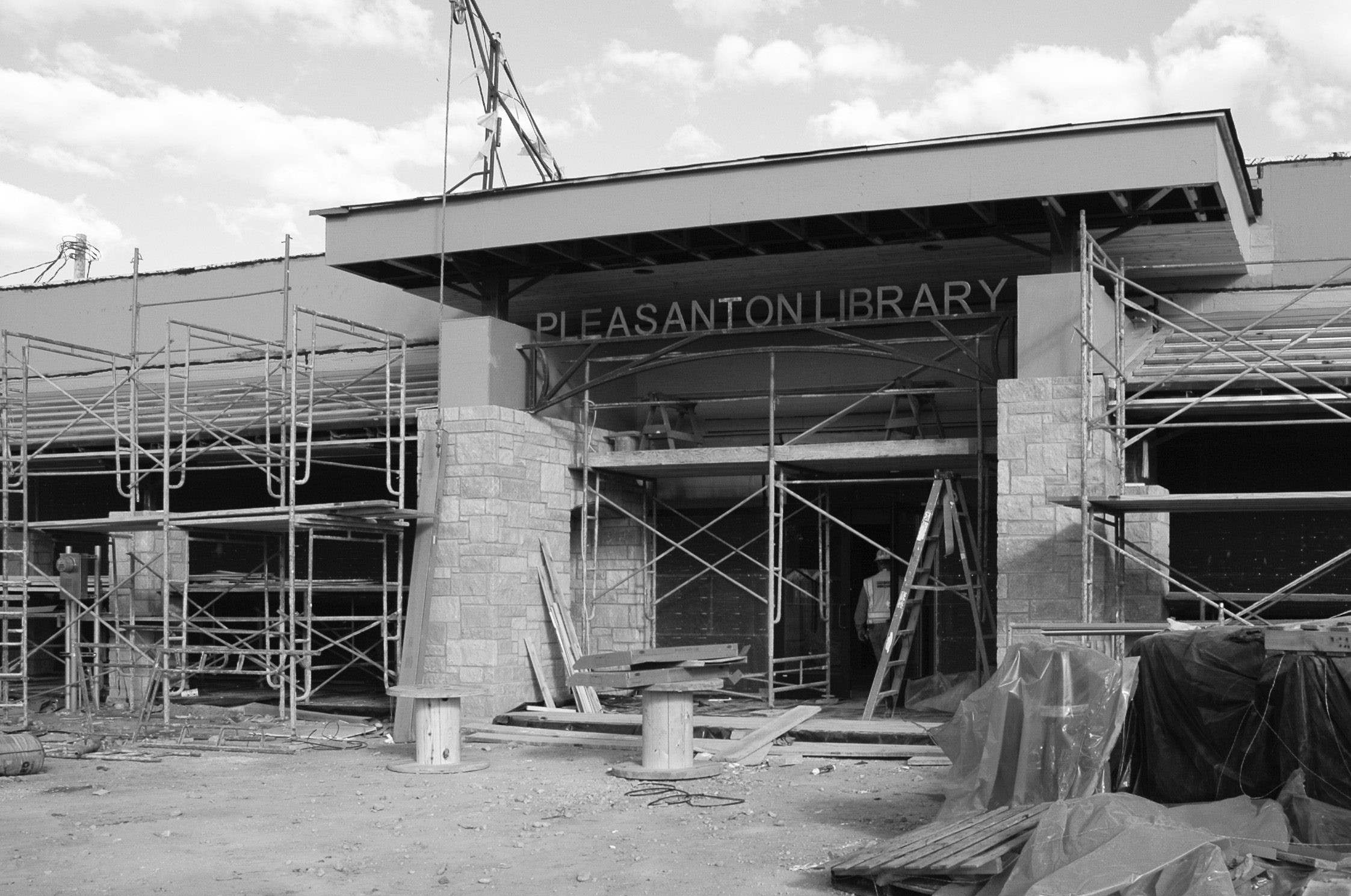 The front of the library on the west side is making progress. 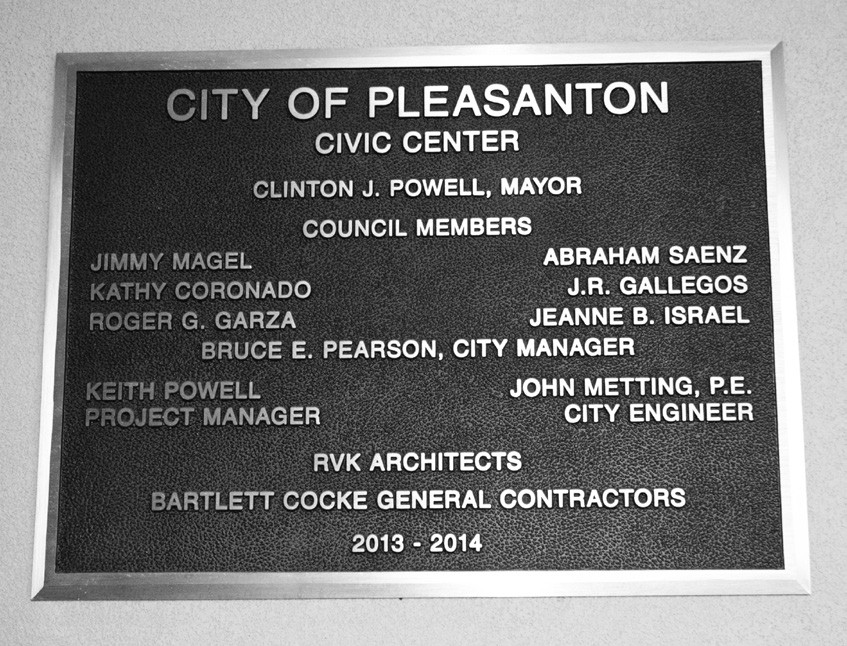 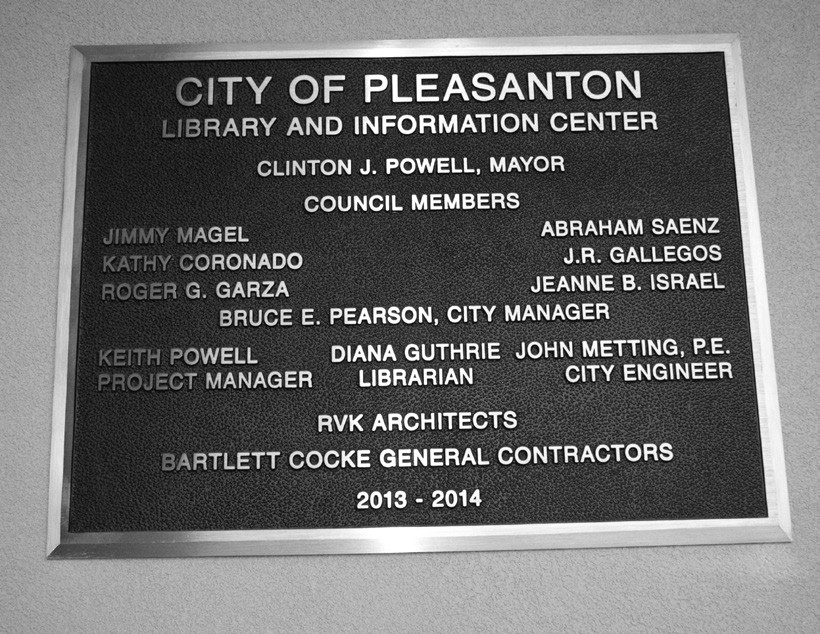 The plaques outside of the doors on the main (west) entrances of the Civic Center and the Library and Information Center greet all of those who enter.