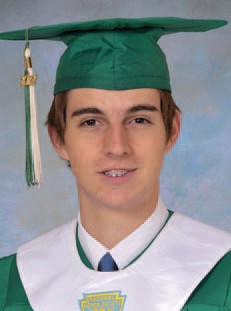 Graduates from all over the Brush Country will receive their diplomas beginning this Friday, May 25 and continuing next Friday and Saturday. Charlotte starts the graduation season with their ceremony at Trojan Gym. Jourdanton, Poteet and, McMullen Co.’s ceremonies will be next Friday, June 1 with Pleasanton handing out diplomas on Satuday, June 2.

Congratulations are extended to all of these young adults who are preparing for their future. Some will attend college or trade school while others will jump into the work force or join the military. Whatever plans may unfold, good luck is wished for the Class of 2012.

Poteet High School’s 2012 Valedictorian is Mark Reyes. Mark is the son of Bobby and Violet Reyes.

His college plans are to attend Texas Tech for 1-2 years then transfer out into an Ivy League University for a Ph.D in Physics, Mathematics, Computer Science and Chemical Engineering. He plans to become a major world influence (George Carlin type figure). Salutatorian

Shelby Martinez is the Salutatorian for the 2012 class of Poteet High School. She is the daughter of Lezlee and Rosendo Martinez, Jr.

She plans to attend Coastal Bend in Pleasanton for one year then transfer to Beeville for the next 2 years for an Associate’s Degree in Radiology Technology. Jourdanton

The Jourdanton High School valedictorian for the Class of 2012 is Amantha Hons. She is the daughter of Peter and Liesl Hons. She has one younger brother, Ian.

Amantha is active in many different activities, including FFA, BPA, 4H, UIL, Theatre, Yearbook, and Class Office. She currently serves as Area X FFA treasurer, president of the Jourdanton FFA, BPA chapter secretary, yearbook co-editor, and class treasurer. Amantha was the captain of the JV cheerleading squad, a member of the JV cross country team, and manager for the Varsity cross country team.

She has competed at the state level several times in both FFA and BPA, competed at the regional level in UIL Prose and UIL Science, and as part of the UIL One Act Play cast, she was an alternate to regionals. She has shown steers and hogs since 4th grade. Amantha has attended National FFA Convention, National 4H Congress, and GOLD Youth Leadership Seminar as a delegate.

She has had the honor of being named the Jourdanton Chamber of Commerce Teenager of the Year and was awarded the Lone Star FFA degree and the FFA chapter’s Star Lone Star Farmer. Amantha also takes many opportunities to give back, participating in community service projects, working with the youth of the county, and volunteering at local functions.

Jamie Cooper is the Jourdanton High School salutatorian for the Class of 2012. Her parents are Jim Cooper and Barbara Cooper.

Throughout her high school career, she was an active member in UIL, Theatre, FFA and sports such as Cross Country, Cheerleading, Volleyball, Basketball, Track and Tennis. She participated in Student Council and is a member of the National Honor Society.

She is a recipient of the President’s Award for Educational Excellence, Who’s Who Among American High School Students, San Antonio Express News A-Team and KSAT 12 Instant Replay’s Scholar Athlete of the Week.

She has also been presented with multiple athletic awards such as Academic All-State and First Team All-District for Basketball and All-Star Cast for One Act Play.

Mark Elmer is valedictorian of the Pleasanton High School class of 2012. He is the son of Edward and Laura Elmer and brother of Michael, Katie, Sarah, Matthew and Marshall.

Mark has distinguished himself as a National Merit Commended Scholar and as an AP Scholar with Honors. Mark is a NASA Texas Aerospace Scholar. He participated in a yearlong interactive online mathematic and technology program thru NASA that culminated in a final research project on space exploration. The highlight of the program was working with NASA scientists for six days at Johnson Space Center to design a land rover to explore the surface of Mars.

While attending Pleasanton High School Mark has placed twice at the State FFA convention in Farm Business Management, he has participated twice in the Regional UIL academic meet in math and science and has received several PHS awards for outstanding math and science student.

Mark is a Varsity Soccer and Tennis letterman. He is a member of National Honor Society and served as a Freshman Mentor. He has participated in two MPACT service projects to repair the homes of elderly and disabled adults.

During his senior year Mark has served as a tutor in the AP calculus class. Mr. Norman wrote “Mark always is willing to help the entire class by showing his work and explaining it on the board. He is unassuming. He is altruistic and is interested in how he may serve others rather than himself. His nickname with me is “MVP” for Most Valuable Professor. “

Mark has been awarded the Trustee Distinguished Scholarship at Rice University. He will major in mathematics and plans to pursue a doctoral degree and become a Professor of Mathematics. Salutatorian

Pleasanton High School’s salutatorian for the class of 2012 is Shannon Silvester, daughter of Darren and Marilee Silvester.

In high school, Shannon was involved in various extracurricular activities, including FCA, BPA, and Yearbook. She was also the president of National Honors Society and vice president of student council, and a member of the varsity cross country and soccer teams for three years each.

Shannon is very involved in her church, the Church of Jesus Christ of Latter-day Saints. She has held various religious leadership positions throughout high school, and attended Bible study for all four years.

She has received numerous academic awards while in high school, and was recognized as a Commended Student through the National Merit Scholar program.

This fall, Shannon will attend Brigham Young University in Provo, Utah and will major in Political Science. McMullen County

Allison Donnell is the valedictorian for the 2012 Class of McMullen County High School in Tilden. Her parents are James Lowe Donnell, Jr. and Lori Donnell.

Any scholarships she has received will be given out at graduation.

Her college plans include attending Texas A&M University College Station in the fall to receive a major in communications. Salutatorian

Hillary Gillin is the salutatorian for the 2012 Class of McMullen County High School. She is the daughter of Ross and Felicia Dickinson.

Gillin’s list of scholarships includes the following: Karnes Electric Scholarship, the Farm Bureau District Scholarship and the rest will be given at graduation.

She plans to attend Texas A&M University-College Station and Blinn Junior College- Bryan and receive a degree during the fall of 2012 in nutrition & consumer sciences. Charlotte

Steven Oropeza, son of Eddie and Jo Ann Oropeza, will graduate as Valedictorian of Charlotte High School with a GPA of 97.985. He has worked hard through high school to maintain this rank since his freshman year.

Throughout his high school years, Steven served as a class officer all four years and has been a member of the National Honor Society, Student Council, and the Spanish Club. He has also served as an officer in FFA. While in FFA, he competed in land judging, horse judging, farm business management, and skills. Steven was also an active member of the athletic program. He participated in basketball and baseball in high school.

During his junior and senior year, Steven took dual credit classes through Palo Alto earning 24 hours. He will be graduating as a distinguished graduate and will be attending the University of Texas at San Antonio where he will be pursing his degree in Pre-Med Biology. He hopes to go on with his studies and go into the field of anesthesiology. Salutatorian

Kathryn Ramos, daughter of Albert and Della Ramos, will graduate as Salutatorian of Charlotte High School. She is ranked in the top 10% of her class since her freshman year. As a junior and senior, she took dual credit classes through Palo Alto College and Tyler Junior College, earning 27 college credit hours. Kathryn will be a Distinguished graduate and will be attending the University of Texas at San Antonio where she will pursue a Bachelor of Science Degree with a view toward Forensic Psychology. She plans to continue her college education through the Doctoral level.

While attending Charlotte High School, Kathryn participated in numerous extracurricular activities and served as her class’ Vice President for three years. She participated in UIL One Act Play, where she earned individual awards in Honorable Mention All-Star Cast and All-Star Cast. She was a member of the Mighty Trojan Band all four years, and was one of the two Drum Majors her senior year. Since her sophomore year, she has been a member of the UIL Academics Team, participating in News Writing and Poetry Interpretation. She placed 2nd at District her junior year, qualifying her for a spot in the Regional UIL contest. She was also a member of the Spanish Club, where she served as the treasurer. She was the co-editor of the Trojan Yearbook Staff her junior and senior years. She has been on the volleyball team and basketball team all four years. She was an active member of the Student Council and served as this year’s president. She served as Secretary for the CHS chapter of National Honor Society.

She was voted by her peers as Most Likely to Succeed, Best Personality and Most Beautiful. She has been awarded the Mirabeau B. Lamar Award of Excellence and is this year’s Miss CHS, an award based on a cumulative point system that counts both academics and extracurricular involvement. 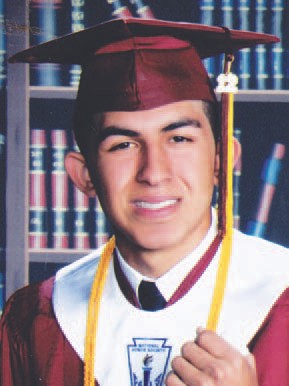 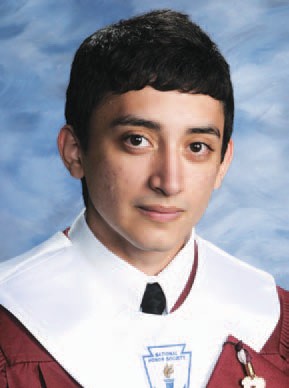 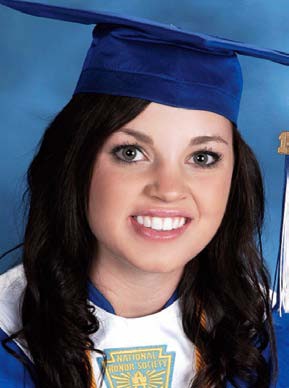 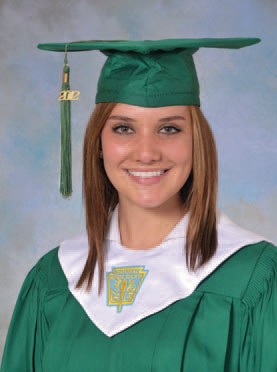 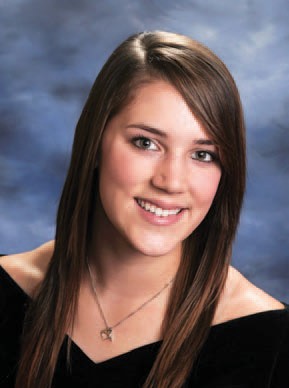 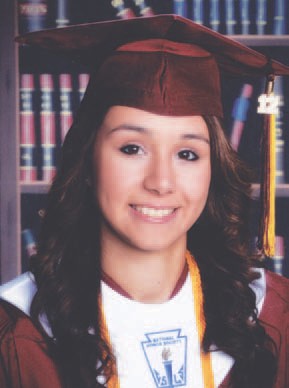 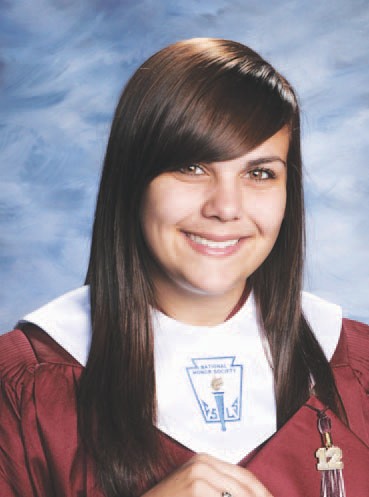 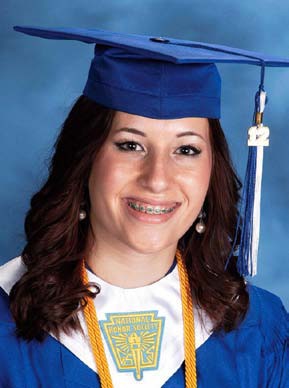